All Around the World (You’ve Gotta Spread the Word)

In recent years, Arsenal’s fanbase has evolved from a fairly local, parochial concept into a truly global concern. With the twin advents of social media and global television coverage (as well as online streaming) fan communities have become global villages. Arsenal and other clubs obviously seek to unite and monetise far flung supporters with clever viral marketing, pre-season tours and social media accounts that serve fans in the millions.

At half-time at the Emirates Stadium, an advertisement plays on the big screens seeking to truly mesh the concepts of the overseas fan and the stadium goer into one composite body. Supporters’ clubs are a valuable and long standing way of engaging supporters from outside of the M25 in a more personal way. World Cup winner George Eastham set up the South African Arsenal supporters club some 25 years ago.

Typically, supporters’ clubs were an avenue for London ex-pats to defy geography and recreate the unique community feel that football fandom provides. Over recent years, the portfolio of overseas supporters’ clubs has swelled, as the Premier League has become a worldwide operation. Supporters clubs from all over England and the rest of the world can apply to become officially recognised by the club, giving them access to tickets and a direct point of contact at Arsenal.

“The first thing to say is before you look to set up a new club please check on Arsenal.com as there might well be an existing club already in that area that you can join,” explains Arsenal’s Supporters’ Liaison Officer Mark Brindle. “We will not accept new clubs within a 50 mile radius of an existing club unless the existing club give their permission first. Once you have established whether there is an existing club or not then just email me and we will send out the Supporters Club Guidelines that we expect Clubs to adhere to.”

It is the job of Mark Brindle, Arsenal’s SLO, to act as the point of contact for Arsenal’s supporters’ club activity, “I work with our international network of supporters clubs. We currently have around 180 clubs worldwide with around 100,000 members,” Mark explains. Supporters’ clubs have access to an ‘extranet’ to keep them in touch with Mark, especially around issues such as ticket applications.

Contact is a two way process however, as Arsenal look for supporters’ clubs to be ambassadors for clubs in their localities. “We also encourage clubs to contact us with any events that they are involved in locally and these often end up in the Matchday programme when they send them in,” says Mark. There are different levels of affiliation for supporters’ networks, the ‘gold standard’ is known as ‘Supporters’ Club plus.’

“We see it as an aspirational level to achieve- it’s about doing things the ‘Arsenal way’. We look at different factors when deciding who gets the plus level, but one of these is definitely how the club works in its local community and if it spreads the word of Arsenal in a positive way by getting involved in local charities etc,” explains Mark.

Arsenal Brasil recently achieved the ‘Supporters’ Club Plus’ standard for the 2016-17 season. Only 14 other supporters’ clubs hold this standard. Arsenal Brasil president Matheus Vianna expands, “There are several requirements to be a VIP Supporters Club, but basically it is the number of active members, number of followers on social networks, events during games and social activity undertaken during the last year.”

The club encourages these supporters’ clubs to engage in local social initiatives and charities. “We send a record of our social activity, such as donation of football boots and equipment for local charity projects. In return we get greater access, for example: access to tickets, getting to meet players after the game when we are over in London,” Matheus points out.

As one might expect, access to tickets for overseas supporters’ clubs is a complex process, as Mark describes. “We have a small pot of tickets for the overseas clubs. This is usually heavily over-subscribed and I have the dubious pleasure of trying to distribute them as fairly as I can. We always stress to our overseas clubs that tickets for their members should not be seen as ‘guaranteed’ as sometimes we have to disappoint. For instance the subscriptions for the upcoming Man City game were around four times as many tickets as we had to distribute.”

Arsenal Brasil run trips to London every Christmas and run competitions to determine which of their members travels, as Matheus illustrates, “Since 2010 we have been present at Boxing Day games. We have already gone to games with groups of more than 20 people. The total cost of a trip from Brazil to London is not affordable for the vast majority of the Brazilian population. We have a “bolão” (a kind of results prediction league) where the supporters play all season and the top 3 win the trip to London- almost all of the cost is met by Arsenal Brasil.” 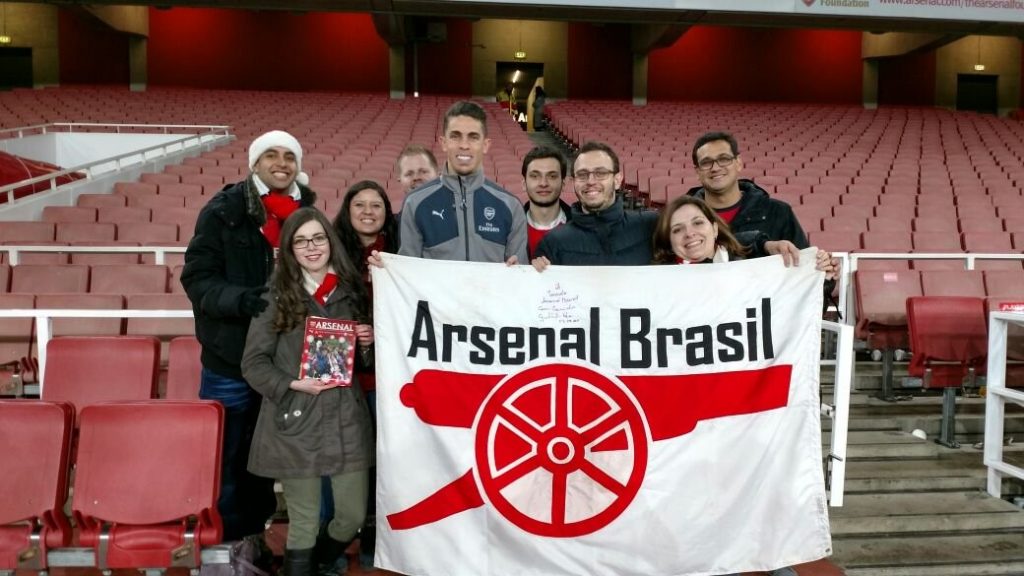 But overseas supporters’ clubs are not just an avenue for that once in a lifetime trip to Emirates Stadium. They offer a chance for fans to feel the sense of community of a matchday, even if they are watching thousands of miles away. Arsenal New York are incredibly active in this respect- as the proprietor of this site experienced in the flesh back in September.

Arsenal NY President Kurtis Powers tells me, “We have 5 different pubs in NYC where we gather for matches. We watch at Blind Pig, O’Hanlons and Barleycorn in Manhattan, and we watch at Woodwork and Highbury Pub in Brooklyn. I imagine that in the next season we’ll be taking on a pub in Queens as we continue to grow, and eventually Long Island as well.”

These communities do not only thrive during matches, Arsenal NY host a number of extra-curricular, Arsenal themed events during a season. “Our biggest goal is setting up events that happen outside of your 90 minutes of viewing,” Kurtis insists. “For example we brought over Andrew and James from Arseblog to do a LIVE Arsecast here in NYC at Barleycorn, and we also put on an event with Liam Brady- also at Barleycorn.”

Supporters’ clubs are left to run pretty autonomously, with Arsenal and Mark Brindle on hand to offer support. Arsenal Brasil have arranged interviews with ex-players Silvinho and Edu, independently of Arsenal. “I have been largely hands off as it should be for the supporters to make the progress they want to,” says Brindle.

It is not only the men’s team that inspires the formation of Supporters’ Clubs. In 2015, the first ever Arsenal Ladies’ Supporters’ club was founded, with the help of the club. Mark recalls, “When I first came into the role it did surprise me that the Ladies team did not have its own supporters club and one of my first meetings was with Faye White to see what we could do. I visited Borehamwood and did a little presentation and Q and A with supporters who were interested in starting the club.”

Arsenal Ladies Supporters’ Club Head of Communications Eoghan Mitchell takes up the story, “Things progressed quite quickly really. A meeting took place in July 2015 (before one of the home games) and we were advised that four Supporters Club positions needed to be filled. The people who had expressed an interest in contributing their time to the success of the Supporters Club sorted out their roles within a week.”

ALSC have a very visible presence at Ladies’ home matches and Arsenal Ladies maintain close dialogue with the supporters’ club, offering a range of benefits for members, “We work quite closely with Arsenal Ladies, who have been great. They facilitate the Supporters’ Player of the Match award, voted for by our members which goes to a player after every home game, and also our Supporters’ Player of the Season and Champagne Moment Awards.

“We held an event towards the end of last season and were keen for a player to be involved. The Club helped arrange for Casey Stoney to come along and share her memories. An open training session was also laid on in October in which 25 Supporters Club members were able to watch the squad being put through their paces. We tend to have one or two face to face meetings with the club a year to share plans and discuss how we can support each other’s work,” Eoghan outlines. 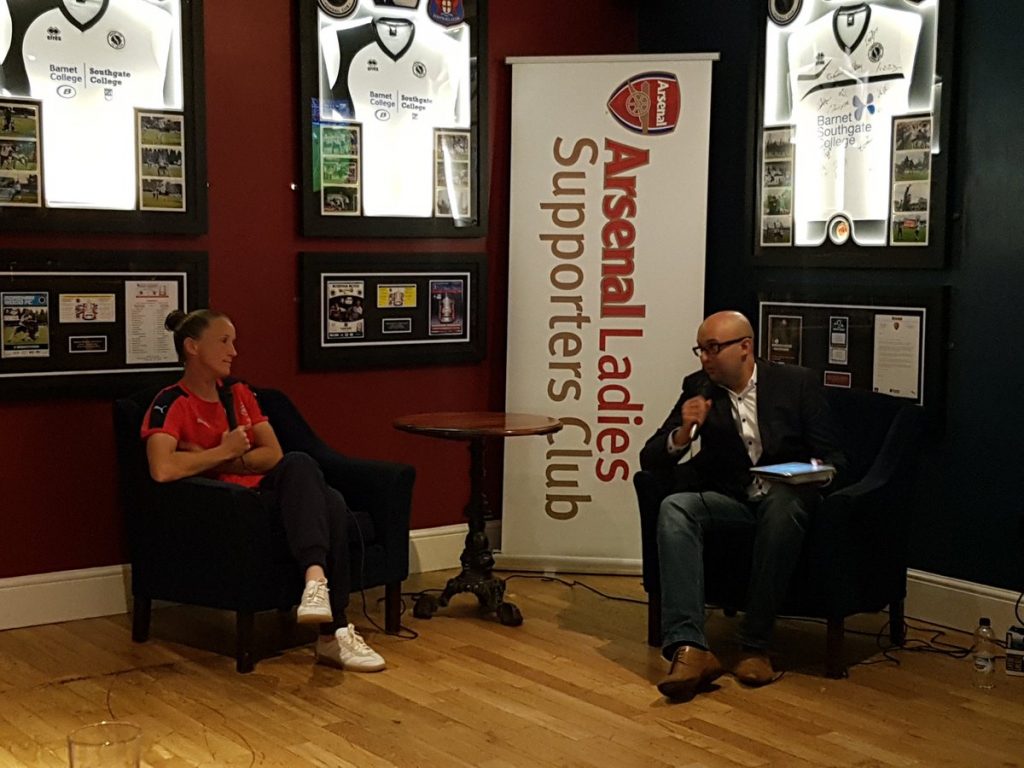 The Premier League has, at least for now, shelved the idea of the 39th game- a competitive league fixture in an overseas location. The Premier League were not deterred by protests from local fans, it was actually the disinterest of overseas supporters that saw encouraged them to rethink the initiative. The Premier League’s marketing showed that overseas fans liked the “local colour” when they watch their teams on television.

Instead, the focus has shifted to creating spaces for overseas fans to gather and watch matches together. Arsenal arranged a screening in Mumbai for the most recent North London derby. Manchester United operate a range of fan parks outside of Europe, offering long distance supporters the opportunity to create their own match day communities closer to home.

It is perhaps fitting in Arsenal’s case that this is the only football club in England not named after a specific geographical location. It is tempting to think of the Arsenal community as a digitally united diaspora, but plenty of work goes in to connect supporters and make that interaction more personable. The Arsenal community outside of London is catalysed by a series of local networks and their activity breathes life into the increasingly malleable fabric of modern Arsenal fandom.

Many thanks to Mark Brindle, Matheus Vianna, Kurtis Powers and Eoghan Mitchell for their time.