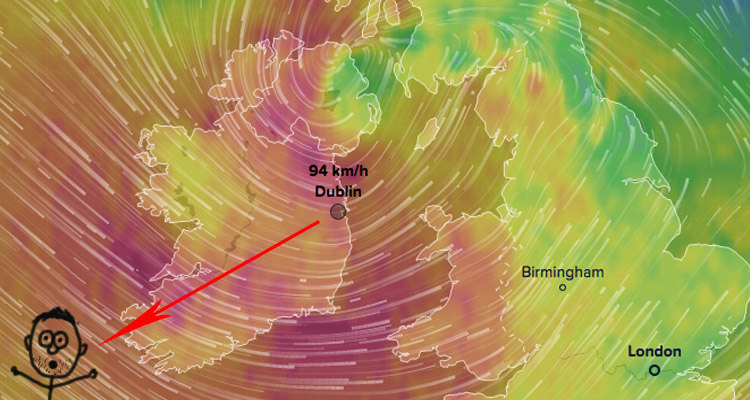 Good morning from a very windy and stormy Dublin. We are currently being hit by ‘Storm Doris’, and it’s much more visceral and threatening than the name suggests. It’s sort of like being beaten to a pulp by a 6’6 brute of a man called Pippin Weakling.

‘You can’t hurt me with a name like that!’, you think as he rains blows down upon your head with mighty, calloused fists the size of gigantic cauliflowers, hardened from years of working in fields where he uses them to crush boulders into sand without any tools.

I’ve been awake on and off since around 4am because of the wind. At one point I think someone’s wheelie bin flew over the house and across the roof and I have to go out and about in it this morning. I envisage doing the full Mary Poppins, taking advantage of the elements with an umbrella and bag of drugs (that’s what she had in there right? That’s why the kids loved her, she gave them pills and they were off their boxes. Just me? Oh well).

Anyway, onto matters Arsenal and it looks, not unexpectedly, as if Santi Cazorla won’t play again until next season. According to reports last night he’s given up on featuring again during this current campaign because of the ongoing, chronic Achilles problems he’s been suffering. He’s had a couple of surgeries since December, a little setback here, a little setback there, and all in all it’s enough to ensure his season is over.

I don’t think there’d be too many people surprised by that. Even with the ‘Oh it’s Arsenal’-ness of it all when it comes to injuries, this is a 32 year old player who has been struggling with his Achilles for 12-18 months now. When he did his knee ligaments against Norwich last season, his comeback was delayed because of the Achilles, not the knee, and he was out from November 29th until May 15th when he played on the final day against Aston Villa.

This season the injury was aggravated when he took a kick against Ludogorets at home in the Champions League, and talk of his return became more and more vague. A few weeks turned into a few weeks more and then that developed into an ‘I don’t know’, and here we are in mid-February with him seemingly being ruled out until August, assuming he has recovered by then.

Of course, in the meantime we have taken up the option of extending his contract for another year. I’m curious how people feel about this. On the one hand, it seems particularly harsh to not show a player support during what is a difficult time for them, especially one as popular and important as Santi Cazorla has been. I think it’s something the club has always tried to do, find the balance between the business and the human, and we do give a player every chance of making it back – even if they sometimes don’t make it.

On the other hand, is there a need to be more ruthless as a football club? To say, ‘Sorry this happened to you, Santi, but needs must. We have to go a different direction’? It’s a tough one. Human vs Player. Man vs Very Well Paid Professional. To me it seems like extending the contract is the decent thing to do, but then there are those who will say that decency doesn’t help win you trophies.

Anyway, what do you think, poll below. Totally anonymous, and I’m genuinely interested to see what people’s thoughts are on this:

Elsewhere, Mesut Ozil has been given some time off to help him recover from ‘back spasms’. He’s currently in Turkey and while I do think ‘back spasms’ or an ongoing issue with his back might go some way to explaining his recent poor form, my suspicion on this one is that he’s been given permission to help with his mind as much as anything else.

The story last week from his agent about how he felt scapegoated was an interesting one. You’d hope it was a reaction to what’s being said in the media rather than backlash from fans or perhaps even teammates, and Arsene Wenger has been known to indulge the German in the past when it comes to things time off.

And look, that’s the way it goes. Some players need the arm around the shoulder, others a good boot up the backside, and Ozil is most certainly the former. Now, there might well be an argument that a bit of an arse-kicking is due, just for variety, but again we come back to the human element and how players are likely to react.

I’ve said it here a couple of times, but Ozil looks like a man carrying a bit of a weight on his shoulders at the moment, above and beyond the struggles he has for form. I suspect Arsene Wenger has given him some time to clear his head, with the hope that it will have a positive effect on him when he’s on the pitch again. And when you look at the schedule – our next two games are Liverpool and Bayern Munich – you can understand why.

He needs him, and he needs the Ozil of the first half of the season, not this shadow of himself we’ve seen in recent weeks. Will it work? I guess the proof of that will be in the Mugsmasher-Munich pudding. Let’s hope it’s delicious pudding and not a gloopy, overcooked mess.

Right, that’s that for me. Tim Stillman will be here later with his column, and in this weeks Tactics Column Anam looks at Alex Oxlade-Chamberlain.