Lucas Perez’s ascent at Arsenal has been gradual. This is because his Gunners career to date has comprised of a series of vignettes, with the Spaniard often deployed from the bench, or else given sporadic starts in cup competitions. He has pieced these cameos together to slowly construct an impressive body of work. So far Lucas has 8 goals and 3 assists from 19 appearances- 9 of which have been abbreviated as a substitute.

The League Cup used to be Arsene’s laboratory for fringe players and youth team graduates looking to impress. In recent years, as the squad has aged, the FA Cup has become the drawbridge between the squad and the starting XI. Last season, a clutch of impressive displays in the competition saw Alex Iwobi thrust into regular league and European contention. This season’s FA Cup has done more to advance Ainsley Maitland Niles and Jeff Rene Adelaide’s first team credentials than the EFL Cup ever has.

The same is true for Perez. An impressive performance and assist against Preston in Round 3 of the FA Cup was followed by a virtuoso display at St. Mary’s in Round 4. Whilst in Round 5 he was inarguably the Gunners’ most effective player at Sutton United. Throw in a hat trick in a Champions League dead rubber in Basel and it is difficult to argue that Lucas is not taking full advantage of the rare opportunities afforded to him.

The clamour for his cameos to be expanded has increased. So why has the manager been so reluctant to use him more? Arsene explains it away as squad congestion in attacking areas. When Perez was acquired back in August, the manager probably did not expect for Alexis Sanchez to become such a viable long term option at centre forward. That said, the Chilean is just as much a blocker for Lucas on the flank as he is in the centre.

The Spaniard’s most obvious obstruction is Walcott. Both players are fairly similar. Certainly in Lucas’ early outings, there were striking similarities between the two players. Perez appeared to be an efficient attacking player that operated on the fringes of the game. His hat trick in Switzerland was positively Walcottian; scoring with his only 3 significant strokes of the ball. It is difficult to play Perez and Walcott on the flanks simultaneously, one really needs to play in the centre if they are to work in tandem.

Walcott is a horse that the manager has backed for over a decade and given his improvement earlier in the campaign, it is perhaps understandable that Arsene wanted to keep Theo on the straight and narrow. There may have been a feeling that Perez makes a better substitute because he offers a high level of threat on the counter attack and is incisive in transitions- his goal against Sutton and his second effort against Nottingham Forest illustrate this, as did his assists for Mesut Özil against Ludogorets in October. 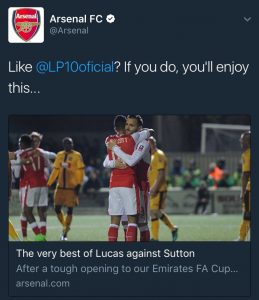 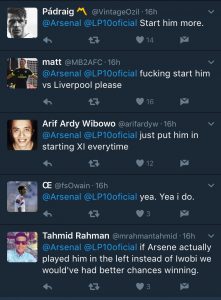 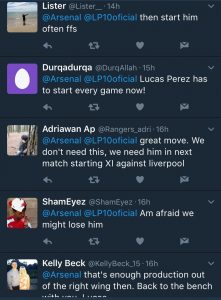 The kind of space Perez likes to operate in- the half space between centre half and full-back- opens up until later on in games, which may have informed the manager’s decision to retain him as a supersub. Wenger moved for Jamie Vardy months before settling on Lucas. The summer signing from Deportivo shares many of Vardy’s qualities due to his directness and his speed on the break. But ultimately, Wenger thought that Jamie Vardy was a better shout than Lucas Perez.

I am not even convinced that the manager was hugely sold on Vardy, but he decided to make a grab for a more mobile striker while Welbeck was injured. Arsene has always taken a shine to players that he has developed from an early age, so it is little surprise that Lucas- a 29 year old signed a little reluctantly- found himself behind Walcott, Chamberlain and Iwobi in the pecking order to this point. He was effectively bought to cover for Welbeck’s absence.

Wenger can be conservative in his team selections and he trusts the likes of Walcott, Chamberlain and Giroud, so it was probably always going to take some time for Lucas to muscle his way into teacher’s pet territory. But recently, the Spaniard has continued to strengthen his case. Firstly, by demonstrating such a promising partnership with Olivier Giroud when the Frenchman came back into the line-up over the festive period.

He essentially played as a second striker, staying close to Giroud in order to scoop up any crumbs that might fall from the table- as Bournemouth and Preston found to their cost. His partnership with Giroud seemed to usher him away from ‘supersub’ territory (somewhat ironically, as Giroud struggles to shake off the same sobriquet). Prior to this, Lucas had a much more ephemeral quality. He might typically touch the ball a handful of times in a match, but at least one of those touches would prove decisive.

It was the cup game against Southampton that elevated his status further. Playing as the pivot in a pacey attacking trio with Walcott and Welbeck, Perez may not have scored, but he was very much the planet that his attacking colleagues orbited. His link play was exceptional, again demonstrating that he could prove to be much more than a highlights player. One of Danny Welbeck’s strengths is his malleability, he can forge a partnership with pretty much anybody because there is an altruism hardwired into his footballing software.

Perez appears to have a similar quality. If it is Walcott that he is competing with, Lucas might point to his superior technical skills in the build-up. However, defensively he can still be a little questionable and is sometimes too easy to dribble past. Walcott’s defensive improvement has been evident, but that bar was stationed pretty low prior to this season. It is well known that the manager is enthused by the way Walcott and Alexis dovetail. The Chilean’s wandering number 9 role is given some fixity by Walcott’s presence in the final third.

But it’s surprising that Lucas was not utilised more during Theo’s absence- not least because, as we have established, the Spaniard formed a fruitful union with Giroud, who started plenty of matches upfront in that period. Lucas and Giroud seemed like a good working reserve for the Alexis Walcott axis. It is possible that the manager just did not believe that Alexis, Lucas and Giroud could work as a triumvirate- though they played together effectively enough during the 2-0 win over Crystal Palace on New Year’s Day. Albeit on that occasion, they had the movement of Iwobi behind them rather than the more considered Özil.

When a team is not playing well, it is not uncommon for the guy that isn’t playing much to find himself intensely feted and there is probably an element of that in the current clamour for Lucas Perez to play more often. However, he is slowly building his case, adding intriguing qualities to his portfolio which, eventually, are going to bear more prolonged investigation.