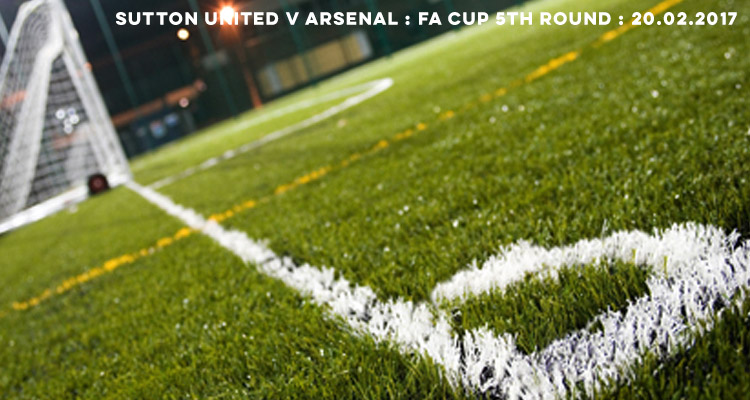 Good morning, welcome to a brand new week and we actually have some football this evening. It’s the FA Cup 5th round against Sutton United, and truly nothing epitomises the magic of the cup by a 7.55pm kick off on a Monday evening against a team sponsored by the betting arm of The Sun.

Arsenal are, of course, looking to bounce back from what was a dismal defeat last week, and one which reverberated through the following days. You can talk and analyse and rationalise all you like, but it’s only when you start winning games again that you can begin to put things behind you.

Tonight’s team is going to be interesting. Do we shake things up and give a chance to players who are fresh and hungry for an opportunity, or give the under-performers another chance to make amends? I’d be much happier to see the former than the latter, to be quite honest. I know there’s a need to keep things balanced, and to put out as strong a team as possible, but it really does feel as if an injection of something different is required.

Ideally, Danny Welbeck would be one of those players, but because of Sutton United’s artificial pitch and his recent return from a serious knee injury, he won’t be taking part. Instead, he played for the U23s v Leicester yesterday, and revealed concerns over the pitch were the reason for that.

Will that influence the manger’s thinking about other players? Per Mertesacker, for example, is in a similar situation to Welbeck, yet to play this season, and under normal circumstances might have seen this game as a way of getting his first run-out. Maybe it’s a different kind of injury, I’m not sure, so would his knee be risked? Either way, it seems as if the surface is something that is causing a little bit of worry in the build-up to this one.

We will practise inside because it is an artificial pitch. It is not the same because it is a dry pitch [at our training ground] and Sutton I have heard have a wet pitch which they water before the game and is quicker.

It is a bit ‘stop’. The weight on the joints is different and you cannot slide to block every time so it makes football a bit different. The ball comes to you suddenly and accelerates and does not slow down like in a normal game, so we have to get used to the different speed.

Ultimately though, while it’s definitely different, it shouldn’t be real issue for us. I’m sure many of you have played on a pitch like this and they’re really very good – far preferable to going to a lower league team whose pitch is a muddy mess with lumps and divots out of it, so I really don’t believe it will be any real hindrance. Maybe you have to stay on your feet a bit more, but that’s not necessarily a bad thing either *cough Mustafi cough*.

Like any cup tie against a team of this stature, the danger lies in underestimating them. They have nothing to lose, they’re huge underdogs and there’ll be an energy and enthusiasm to their performance that we’ll have to deal with. A small ground with a raucous crowd making lots of noise, it’s all set up for them to just have a go and see what happens.

Anything other than an Arsenal win, however, would be pretty catastrophic. The FA Cup does provide the chance of a trophy this season, and when you consider the winners of tonight’s game will host another non-league side, Lincoln City, in the quarter-finals, it’s an opportunity we really have to make the most of.

Still, you never know what you’re going to get from this Arsenal team, so who knows what might happen. On paper we’re clear favourites, but the game is not played on paper, it’s played on a 3G artificial surface. Let’s hope that we’re up for the cup.

As ever we will have a live blog for you later on, you can follow the game with live text commentary if you’re stuck in work or don’t have TV coverage. We’ll also have all the post-game stuff on Arseblog News afterwards, so join us for that.

James and I will be here with an Arsecast Extra tomorrow, so hang tight until then for the podcast. In the meantime, have a good Monday.