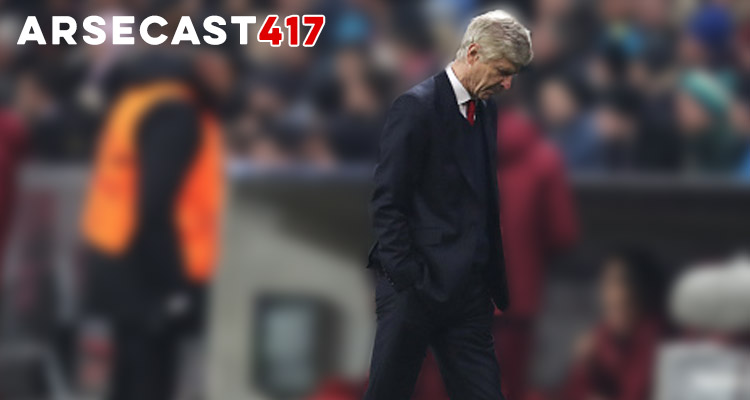 Man, yesterday seemed like a very long day. I’ve been doing this blog for coming up on 15 years now, and I don’t remember a single day ever having quite so much weight. There was only one thing to talk about and write about of course, and that carries on this morning, into the Arsecast and will likely reverberate throughout the day.

Having had his post-Bayern press conference cut short by the club’s communications director on Wednesday night, Arsene Wenger will be back in front of the assembled press corps this morning, ostensibly to talk about Monday evening’s FA Cup 5th round tie with Sutton United.

My guess, however, is that there won’t be as much focus on that as there will be his future and what his intentions are come the summer. I would also be hugely surprised if he provided any insight to that at this point. What happened on Wednesday is still very raw, and even if he was thinking of calling time this summer, I don’t really see him announcing it in this fashion. He has hinted at a decision as early as March, but whatever happens and whenever it happens will be down to him, on his own terms, not because the lad from Sky has asked about him about at a presser.

He can’t not be thinking about it though and nobody should be under any illusions that it’s a simple thing for him or the football club. I wrote a bit for ESPN about it here, touching on the club issues that need to be addressed, and I think Amy Lawrence put it perfectly in her excellent piece for the Guardian about what Arsene himself has to consider:

Do not underestimate how scary a proposition it is for him to wake up in the morning and not be a football manager. The game, in particular Arsenal, has been his obsession for so long and he is not a man who welcomes relaxing or has other hobbies to enjoy.

I’ve seen people suggest the only reason he stays in the job is money, and while his salary – commensurate with other top managers at other top clubs, by the way – is very nice, if you think he’s a man motivated by money, you have a deep misunderstanding of him.

He’s like an old wizard, working harder and longer than ever to recreate the magic formula of his younger years. He almost gets there, so tantalisingly close, but when it comes to executing the spell, there’s something not quite right. Something missing. It’s trying to find that again which drives him, because he is, at the end of the day, a man obsessed with football, with Arsenal, with winning games, and more and more he appears beaten down by his inability to get his teams to take that final step between very good and champions.

As he told Roger Bennett from Men in Blazers on the 20th anniversary of his appointment:

As I said yesterday though, there comes a time when it’s clear the message is not getting through, and for many of those players who owe him so, so much, there’s a need for some introspection on their part too. They’re not without blame themselves, but when it comes to the crunch, the players survive through sheer force of numbers, and it’s the man at the top who departs.

All in all, it’s going to be a very interesting period for this football club. Hopefully, what has happened this week isn’t too damaging, because there’s still a good chunk of this season left. The aim has to be to go as far as possible in the FA Cup and finish as high as possible in the league. It doesn’t change what should happen this summer, but nobody can down tools just yet.

Meanwhile, some vaguely worrying quotes from Mesut Ozil’s agent about how the player feels he’s been made a scapegoat for the team’s recent poor form. Speaking to the BBC he said:

Criticism is normal if a player plays badly. But Mesut feels people are not focusing on his performance; they are using him as a scapegoat for the team after bad results.

Football is a team sport and Arsenal are not performing well as a team. Eleven players were on the pitch but Mesut was singled out for criticism. Was he the reason that Arsenal conceded five goals?

I don’t think that’s too unfair really, and I think there’s been too much focus on Ozil during a period when almost nobody has played well and there have been others who have performed worse. Of course he’s the only one who cost £42.5m and his body language at the best of times tends to irk certain people who would prefer him to ‘run around a bit’.

But with that price tag comes expectation, and such is his quality you want to see him do more. I wonder if there’s something more to his poor spell, his loss of confidence seems so profound, and while criticism is normal, perhaps there’s just something up with Mesut Ozil the human as well as Mesut Ozil the footballer.

Hopefully his agent, when he talks about scapegoating, is referring to the media more than anything else, because if he’s including the fans or perhaps leaky-mouthed teammates, this could well be seen as a way of easing open the door ahead of an exit. Fun times.

Right then, time now for this week’s Arsecast and given the week that’s in it, there was really only one topic of discussion: the Bayern result and what it means for Arsene Wenger. To get some differing perspectives on it, I’m joined by James from Gunnerblog, Daniel Storey from Football 365, chief football writer for the Independent Miguel Delaney, and the Man from East Lower. We talk about the manager, his future, the structures of the football club, the board, and pretty much every aspect of the situation.

I also chat with Kurtis Powers from Arsenal NYC about a cool event involving Liam Brady, and as you might expect there’s not a lot of the usual waffle under the circumstances.

You can subscribe to the Arsecast on iTunes by clicking here. Or if you want to subscribe directly to the feed URL you can do so too (this is a much better way to do it as you don’t experience the delays from iTunes). To download the Arsecast directly, use the links below the player.

All the news from the manager’s press conference can be found over on Arseblog News this morning and throughout the day.

Enjoy the podcast, catch you tomorrow.