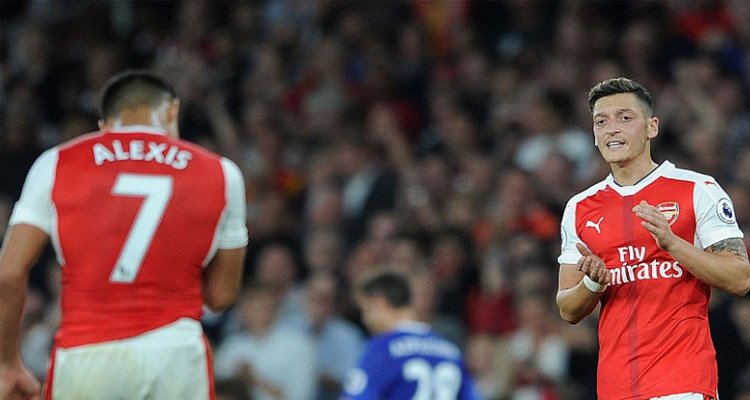 Well, this is it folks, a game that could end our season in terms of the Premier League title, keep us just about in the hunt, or one that could do a little bit of damage to a seemingly unstoppable Chelsea side and perhaps halt their momentum.

The odds are stacked against us, I think it’s fair to say. Not that there’s a huge difference between them and us, and we have beaten them already this season (in fun fashion too), but:

And it’s that last point that will really be key today, how we decide to deal with that situation will go a long way to deciding the outcome of this game and the way we play. On yesterday’s Arsecast, Philippe and I discussed this at length, and given the paucity of options, it would make sense to perhaps tweak the formation to accommodate an extra body in there.

A 4-3-3, dropping Alex Iwobi in with Francis Coquelin and Alex Oxlade-Chamberlain – who appear to be the only pair he can realistically select – and pushing Mesut Ozil into a wider role on the left, would be a decent solution, but it’s very difficult to see the manager changing the system itself.

It’s not something he tends to do, but maybe he could look at Chelsea and Antonio Conte as evidence that when needs must, it’s not a bad idea. Following our pasting of them at the Emirates this season, he went back to the tactics board, went with a back three, and ever since they’ve been a juggernaut, winning more or less every game since – hence their position at the top of the table with real distance between them and everyone else.

If Wenger was so inclined today, we’d have Alexis Sanchez up front – I’m not even considering the idea that it would be anyone else – with one of Lucas Perez, Danny Welbeck or Theo Walcott. A few weeks down the line I’d say it would have to be Welbeck, because of his pace and power and how well he seems to combine with everyone he plays with.

I suspect that the manager might view his recent return to fitness as an issue, and plump for Walcott instead, but I’d have no problem if he went with Perez either. He might not have the searing pace of Theo, but he’s still quick, his movement is superb, and against a team like Chelsea you need a bit of craft and intelligence, and I think he’s got plenty of that.

Ultimately though, you look at those forward options and think we’re strong with some depth on the bench; the back four with Hector Bellerin back and the experience of Petr Cech in goal is one that should be more than capable of putting in a performance; so it all comes back to the midfield.

While I think we’ve got little choice but to play Coquelin and the Ox, I think just sending them out as a duo to do what he’d normally expect his midfield to do is a bit fanciful. If we haven’t paid any special attention to this, then I think we could find ourselves in trouble. We might get a coming of age performance from Oxlade-Chamberlain, and Coquelin could sit just in front of the back four in classic DM style to break up play and give the ball to the men who can really do something with it, but you couldn’t be confident that that’s going to happen.

What we do know for sure is that it’s going to take a big performance to get a win today. It might even take one to avoid defeat. In games like this you need the collective effort to be absolutely right, not like that first half against Watford because if they can punish you, you can be quite sure Chelsea will.

On top of that, you need one or two to stand out. Back in September there was a brilliant team performance from front to back, but Ozil and Sanchez stick out in my mind that day. The big men helped make the difference, and today we’ll need our best players to impose themselves on the game.

The players know as well as anyone else what’s at stake here. They want to win the title and they know there’s no room for error today. Losing simply isn’t an option, if they do it’s done. Early February and we’ll have no chance of the winning the league, bar an astonishing collapse by Chelsea which is a fanciful notion in any event.

Win and the gap is closed to 6 points: still significant, but one that’s far from impossible to make up over the course of 14 games. Of course you can question whether this team is capable of doing that, but I’d rather be in a position where we can still maintain a genuine interest in where the title is going than not. Let’s see what we get today.

As ever, we’ll have a live blog for you, check back later for a post with all the info or simply bookmark our default live blog page and updates will begin automatically – starting with team news an hour before kick off.

Until then, take it easy, and there’s still time to listen to yesterday’s Arsecast, discussing the Chelsea game, midfield, the manager and lots more.

Torreira should start in midfield rejig, but what else will Emery change for Chelsea?