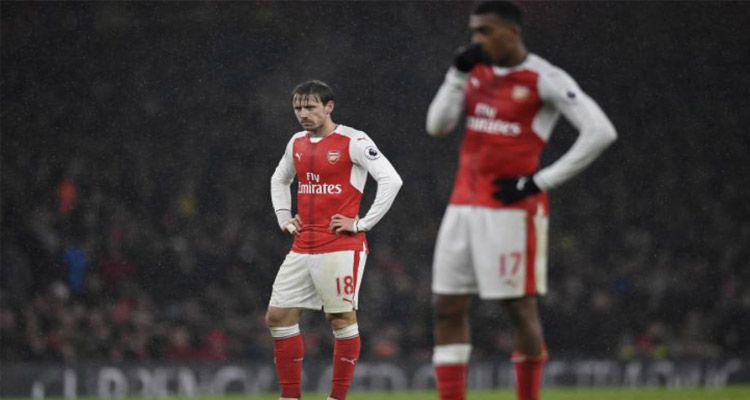 Arsenal paid the price for a dismal first 45 minutes and yet another slow start as they lost both the match and a chance to gain some ground on Chelsea who dropped points at Anfield last night. Arsene Wenger brought back the ‘big guns’ – players like Mesut Ozil, Olivier Giroud, Aaron Ramsey, Francis Coquelin, who had completely sat out the weekend’s FA Cup clash, ostensibly to keep them fresh for this one.

From the first minute it was obvious Arsenal weren’t the same, sharp, fluid unit we saw against Southampton last Saturday, with the visitors sharper and more switched on. We were careless in possession, second to almost everything, and guilty of stupidity in dangerous places.

While Aaron Ramsey got hung out to dry for his role in the first goal, much of that has to do with who it was the ball deflected in off. Had it been Koscielny, for example, I don’t think people would have reacted in the same way, and the outrage over what was a routine, but unfortunate deflection, means nobody’s asking why it Shkodran Mustafi foolishly gave away the free kick in the first place (incidentally: that was his second concession in almost the same area in the first 11 minutes).

Ramsey then got hammered for the second, and if you want to apportion some blame for not taking control of the ball in midfield that’s not totally unfair, but it chooses to ignore a dreadful infield throw-in from Gabriel, and the fact Coquelin allowed Capoue to saunter from halfway and into our penalty area without a challenge. Mustafi hardly covered himself in glory again, allowing the Watford man space and time to shoot. Cech saved, but Troy Deeney, a man who looks like he ate Grant Holt, put the rest of our defence to shame by reacting quickest and poking home from close range to double the lead.

Ramsey’s night ended moments later, yet another injury, this time a calf-strain, and at this point it really feels like he’s gone beyond the point where he can turn around the viciousness and vitriol directed towards him by sections of the fanbase. I don’t think anyone is suggesting his form has been particularly great, but the weight of criticism for every little thing he does is over the top. When it reaches the levels it has right now, it’s very, very difficult to turn that around. I think it’s unfair, but maybe that’s just me.

It also serves to obscure the wider issue. It wasn’t because Aaron Ramsey was picked that to a man, bar Cech who made some important first half saves, Arsenal were sub-par in that first 45 minutes. Not a single player could have been said to play anywhere near as well as we know they can, and if you’ve watched this team enough down the years you’ll know there was a whiff of Swansea last season off this performance.

What is it exactly? I wish I knew. Pressure at home? Pressure from the need to keep up with the leaders? Expectation? An inability to manage these situations? I just know we’ve seen it before, and while this is a team that has showed some exceptional character this season and rescued situations that looked beyond them, if you keep giving yourself mountains to climb eventually you’re going to find one that’s insurmountable.

Theo Walcott came on for Olivier Giroud at half-time, a sign that Arsene Wenger knew something had to change – even if there are suggestions the French striker was carrying a knock throughout the first period. Walcott had a chance to make an impact but couldn’t. He shot into the side-netting when he should have squared the ball to a couple of men waiting for a tap-in, and when Ozil gifted him with a chance in the 50th minute to get one back nice and early in the half he saw his effort saved by Gomes. He should have scored from there, and after that he faded out of the game completely, without an effort on goal in the final half an hour plus injury time.

One man who did give us something though was Alex Iwobi whose drive and power down the left was causing them all kinds of problems. He got on the end of an Alexis cross to cushion the ball into the far corner to make it 2-1 in the 58th minute, plenty of time for us to grab at least one more, but for all our possession and dominance we only had one more shot on target – from Lucas Perez in last gasps of injury time.

The Spaniard came on with over twenty minutes to go, but to accommodate him on the left of the attack, Iwobi was moved into central midfield to replace Coquelin, and with that went much of our momentum. He’d had so much joy down that left, and caused them so many problems, so it was a move that pretty much backfired, even if Lucas was unlucky not to level things when his shot smashed back off the crossbar.

I understood the need to put on another goal threat, but like most of the decisions Arsene Wenger made last night, it didn’t do us much good. Hindsight is a wonderful thing, of course, and while the Coquelin/Ramsey midfield was basically his only option, the presence of Giroud up front from the off is something we have to address – along with the problem we have of starting games so slowly. It’s happened far too often for it not to be a fundamental problem.

It’s unfair to say that’s entirely down to Giroud, we’ve started games badly without him too, and I’ve said countless times his contribution in recent weeks has been outstanding. However, I’ve also said that I think he should be a player who is brought on late in games like these to make an impact, and that when we play Alexis up front with other mobile, pacy players we play better football.

After a superb display against Southampton, would there have been any risk in playing Lucas from the off? That would have given us a front three of the Chilean, Iwobi and Perez, backed up by Ozil (who created 6 goalscoring chances last night), and while none of us can be sure that would have made the difference, I think the evidence that we’re more effective with that kind of line-up is there for all to see.

Before the game, Arsene Wenger said:

The players are prepared and mentally focused to deal with the challenges we will face.

It was obvious we lost duels and were not sharp enough. It looked more mentally that we were not ready for the challenges.

Quite what you can draw from that, I’m not sure, other than the manager talks an awful lot of shite sometimes. We had a chance to close the gap on Chelsea from 8 points to 6 last night, instead they’ve extended it to 9. It was a chance to keep the title challenge alive and go into Saturday’s game brimming with self-belief and confidence.

Instead, as we have done so many times down the years, we stumbled over a relatively low hurdle once again. It’s like having the life sucked out of you, you feel almost foolish for allowing yourself to believe it might be different, and quite what state we’re going to be in for Chelsea remains to be seen.

We have no midfield to speak of, whatever happens there is going to be makeshift, and if we couldn’t cope with the pressure of Watford at home, what is a 12.30 kick off away from home against a Chelsea side that have lost just once in their last 17 games going to be like? Obviously it’s something we’ll discuss over the coming days, but it’s hard to be anything other than fearful.

A 9 point gap isn’t completely and utterly impossible to overturn, there are still 15 games to go and a lot can happen, but you’d be hard pressed to say this is a team that looks like it can put together the form required to do that. Not when they serve up the slops they did last night.