Wenger charged, and should be punished, but let’s stop ignoring dreadful refereeing

Morning. As expected Arsene Wenger has been hit with an FA charge after the rather hectic end to Sunday’s 2-1 win over Burnley.

In a statement released yesterday, the FA said:

So, let’s break this down. Arsenal have denied that the manager called Jon Moss a cheat, despite what some reports suggested, and from what we can gather the insulting words towards Anthony Taylor were to tell him to ‘f*ck off’ … twice.

I said something that you hear every day in football. Overall, nine times out of 10 you are not sent to the stand for that.

Which is a fair point really, but I guess it depends on how it was said. As an exclamation of frustration into the ether, it’s hardly worthy of that. If it was directed with some vigour towards Taylor, then perhaps it’s slightly different, especially if you’re dealing with a precious tell-tale – which is what he appears to be.

Then there’s the remaining in the tunnel and making physical contact with the official. I think he probably knew he couldn’t stay in the tunnel, but given there was so little time left and he wanted to see how the game finished, it’s an understandable reaction to at least try.

Then comes the physical contact. I’ve seen words like ‘shove’ used, which only serve to dramatise things. Watch the video again, and he’s responding to Taylor trying to busybody him down the tunnel. This ‘shove’ on Taylor’s outstretched arm – not his chest or anything more aggressive than that – is almost him saying ‘The match is still going on, get back to it.’

It’s wrong of him to do it, because you can’t put hands on officials, we all know that, but when he is punished for it, let the punishment fit the crime. Yesterday, there were actual journalists suggesting that he serve a 10 match stadium ban. One went so far as to say he should be forced into footballing community service and made referee 10 Sunday League games.

Instead of a limp fine or weak touchline ban, make managers ref 10 Sunday league games. Community service – and a lesson in how hard it is https://t.co/2D4MXVAoYF

I mean, really? He shouldn’t have done it, he knows that as his post-game apology shows, but at least have some common sense and let’s not resort to the worst kind of shrieking hysteria. A couple of games and a hefty fine – and given that the money collected by the FA goes back into the pot which can help fund grass-roots football and/or charitable endeavours, then at least it’ll make some good of use of that.

If he’d actually shoved him, or struck him, or throttled him – like most of us want to do when we see Anthony Taylor, let’s be honest – then we could have a discussion about a more severe punishment, but some of the reaction to this has been seriously over the top, in my opinion. Unusual for this culture of calm, rational analysis we live, I know.

Amazingly, what it hasn’t done is sparked any discussion about how poor the standard of officiating is this season, and for me that’s a much more important issue than one manager getting a bit crotchety when his team concedes a penalty late in the game.

Every season it seems to get worse. The PGMOB (Professional Game Match Officials Board) sit in their ivory tower, resisting change as much as possible. They confuse players, managers and fans with their lack of consistency when it comes to decision making. The only thing that is consistent is them getting stuff wrong, week in, week out. 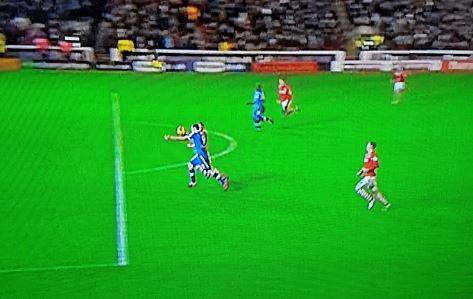 Their golden boy, Mike Dean, ** was demoted to the Championship last weekend, and made another horrendous mistake by awarding a penalty for a handball outside the area. It wasn’t even on the edge. But just you watch, quicker than you can imagine, he’ll be back in the Premier League given a top game to do, because there’s just no accountability.

Yes, we all understand that referees have a difficult job, and that the pace of the game these days makes it even more challenging. We also know that we, as viewers, have the benefit of replays from all kinds of angles, with slow-motion, and everything else.

They have to make decisions in a split-second, which is why I was quick to praise Mike Jones for his yellow card to the Swansea player for his dive in the box last weekend. A brilliant decision made in a split-second, one that could easily have gone the other way because it was only apparent to us it was a dive after three of four replays.

And yet referees, and the people who are in charge of these men being asked to do a difficult job, basically remain silent when it comes to things that could help them. Why aren’t they more vocal about trying to integrate video replays or a 5th official who can help them? It’s because they’ve been raised to think they’re untouchable, that their decisions should be the be all and end all regardless of whether they’re correct or not.

This idea that post-game analysis of their performances would undermine referees is so unbelievably stupid and prehistoric. If a referee could watch the game again with the benefit of all the replays we have, allowing him to overturn certain decisions or say ‘mea culpa’, I don’t think it would outrage people at all. It would show an understanding that it is increasingly difficult to get things right in ‘real time’. It might even help them improve their decision making.

Maybe it wouldn’t have any impact on the outcomes of games, but if there was a contentious yellow or red card that could be stricken off without the need for formal procedures and appeals, wouldn’t that be a better way of doing things? We know that referees are human, so let us see that. When they’re presented to us as infallible official-bots, it’s little wonder people get frustrated and question their capability and integrity.

It also leaves certain officials believing that they can treat players and managers as if they were children. I’m no fan of Jose Mourinho, as you all know, but a touchline ban for kicking a water bottle? Do me a favour. To be fair, it’s a two-way street and players haranguing officials and swearing at them is unacceptable too. Once more though, it’s something The FA and the PGMOB have never cracked down on in any serious way. Take Wayne Rooney as an example, I have never seen any player get away with more obvious and sustained abuse of referees.

You don’t need to be a lip-reader to see him tell them where to go time and time again. Would it make the rest sit up and take notice if the England captain was sent off for that? Of course – as long as those rules were applied consistently. We saw Mustafi take a booking for yelling something at a linesman yesterday, yet Jon Moss allowed Ashley Barnes to scream right into his face without a yellow card, that after he failed to issue a red card for a player raking his studs down an opponent’s face.

And they wonder why managers get hot under the collar? It’s because of a lack of faith in their decision making. It’s because almost the first thing you think when they make a decision is that they’ve got it wrong. And that speaks far more to the referees, and their standards and capabilities than anything else.

So, by all means punish Arsene Wenger for his behaviour, but as long as they think that’s all they have to deal with, then we’re going to have to endure these kind of things even longer. A hefty ban, a massive fine, making Wenger referee Sunday League, or any of the other suggestions that range from rank stupidity to downright moronic, won’t make the blindest bit of difference until they address the elephant in the room – which is the PGMOB, led by the inept Mike Riley, the way it’s set up and allowed to operate with such impunity and with no accountability to anyone but itself.

Finally, for today, if you haven’t had a chance to listen to yesterday’s Arsecast Extra, there’s lots of chat about Granit Xhaka and his behaviour, Arsene Wenger, the win over Burley, an ingenious solution to our keeper not being able to save penalties and lots more. Check it out below.

Right, that’s your lot, news throughout the day on Arseblog News. Have a good one.

*Clarification: Turns out this is not true. Apologies.