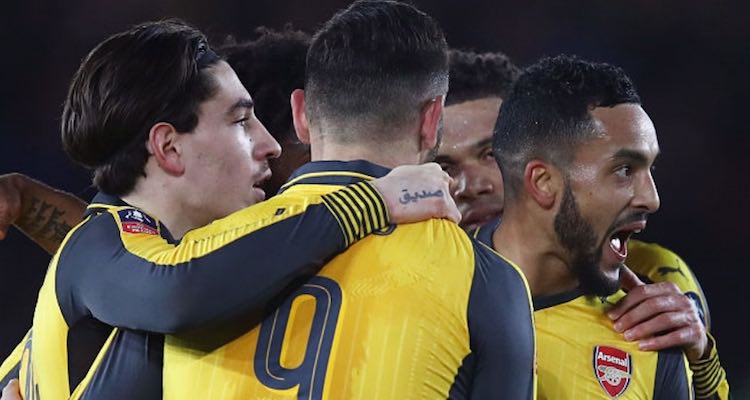 It would be fair to say there was some trepidation pre-game when the teams were announced. While we expected some rotation, the complete absence of Aaron Ramsey and Francis Coquelin – worryingly described as ‘unavailable’ by Arsene Wenger – meant our midfield trio consisted Alex Oxlade-Chamberlain, Ainsley Maitland-Niles and Jeff ‘The Jeff’ Reine-Adelaide.

It looked makeshift, but in the end it was Southampton who got both barrels of our double-barrelled trio, and to a man they were outstanding – Oxlade-Chamberlain in particular putting in the kind of performance that you’d love to see more often. Sure, for some it was ‘only Southampton’, and a changed Southampton at that, but I don’t think that should take anything away from him, or what the rest of the team did last night.

The football proved an enjoyable and welcome distraction, and with a front three of Danny Welbeck, Lucas Perez and Theo Walcott we had pace, movement and, thanks to the Spaniard, no small amount of guile. He created the first by flicking a Maitland-Niles pass behind the defence for Welbeck to run onto. The pass was brilliant, Bergkamp-esque almost: the finish – for a man so long out of the game – was superb, flicking it over the keeper and in off the underside of the bar.

Oxlade-Chamberlain made the second, finding Welbeck with an excellent ball over the top. The 26 year old’s first touch was nice, he finished between the keeper’s legs, and the despairing defender made a wonderful CLANG when his attempt to stop the ball going over the line failed and he collided with the post. Almost Phil Babbian.

Perez was involved in the third, again with a clever pass finding space for Welbeck to run into, and when he cut the ball back Walcott showed the desire to get there ahead of the rather too static defender to poke the ball into the net and make it 3-0 at half-time.

The former Deportivo man wasn’t the stand out performer on the day, but once again showed he’s a man who looks as if he can contribute something almost every time he plays. He set up Bellerin for a chance which he wasted, shooting straight at the keeper, before Steve Bould made his first change of the evening taking off Welbeck and putting on Alexis Sanchez.

It might have seemed odd with the game more or less won, but the Chilean got in on the action with a couple of assists to provide Walcott with his hat-trick. Oxlade-Chamberlain played him in behind and his cut back was swept into the far corner to make it 4-0, and when a brilliant Lucas pass from deep set Sanchez on his way down the left, he squared it for Theo to slot home and take the match ball.

The Saints had almost nothing to offer, a few speculative shots and that was that. For some it will be because they made so many changes, and while that definitely played some part, the reality is that they weren’t in the game because of how well we played. And when you look at our starting XI, it’s a long way from our strongest, so I’d much rather credit our chaps with a good performance than play up the paucity of the opposition.

It was pleasant to watch because we had individual strong performances and collectively as well. I liked the fact that we didn’t lose our concentration. It didn’t become easy when it was 3-0, we kept playing the way we want to play. It was pleasant to watch and it was a good opportunity to see players who have come back, like Welbeck, be so convincing.

There’s certainly something to that point about not being content with 3-0, and going on to make the scoreline even more decisive. There was a hunger in the team to take full advantage of how well we were playing, and considering this is a ground we haven’t won at since 2003, it was even more impressive.

He also spoke about Danny Welbeck who marked his first start since last April with two very good goals:

I knew that he worked very hard, but you never know how much efficiency there will be… to transfer that into a competitive game. I think it was great to see that he hasn’t lost his runs, he hasn’t lost his finishing. It shows as well, when you are able to transform that frustration of not playing into efficiency, that’s a special guy.

So while there’s so much to like about last night, that adds just a little bit of something special to it. Welbeck really does appear to be one of the good guys, and for him to have missed so much of his career here through injury is a real shame. It’s great to see him back on the scoresheet and fingers crossed he can stay fit.

It’s also very promising to have a player back who can add something to the way we play and having another goal threat in the team is a very positive thing. Looking across that front line with him, Alexis, Giroud, Walcott, Lucas, Ozil, Iwobi – there’s a lot of talent, creativity and end-product there, and it’ll be interesting to see how the manager chooses to blend that over the coming weeks.

One final word for the youngsters, Maitland-Niles and The Jeff really impressed in midfield for guys who are so inexperienced at this level, and considering Rob Holding had to deal with Shane Long – a huge irritant almost every time he plays us – he deserves some props too for an assured display at the back.

As for the Ox, he’s often been described as a central midfielder by Arsene Wenger, not something I’ve always been convinced about, but I don’t think it’s a coincidence that his best performances for us – you think of Milan and Bayern in the Champions League, a game against Palace, last night etc – have all come when he’s been played there.

All in all, a most pleasant evening and into the 5th round of the FA Cup we go. If there is a worry it’s how long we might be without Ramsey and Coquelin, but that’s something we can consider over the next couple of days as we prepare to face Watford on Tuesday night.

For now, have a great Sunday.