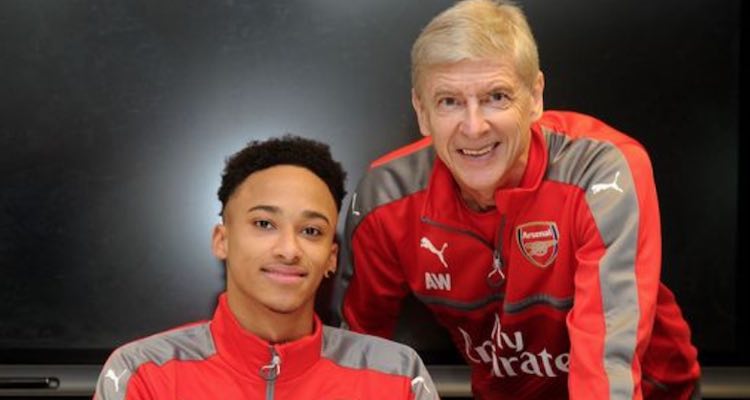 Midweek quietude going on as we prepare with no fuss for Swansea at the weekend. More on that game over the coming days.

The only thing of note to happen yesterday was the signing of 20 year old Cohen Bramall who, just a few weeks ago, was playing for Hednesford Town in the Evo-Stik Northern Premier League. Now he’s an Arsenal player, although I think it was notable that in the official announcement of his arrival he was described as a ‘young pro’ who would join up with Steve Gatting and the U23s.

He had obviously caught the eye of a couple of clubs, having a trial with Crystal Palace which included a behind closed doors game, and also played a friendly for Birmingham City. Then this happened:

On the Tuesday, I was made redundant from Bentley Motors and on the Wednesday, Arsenal came in. I was gobsmacked and took the chance with both hands. I drove down on the Wednesday and trained with the first team on Thursday and Friday. Then they offered me a deal.

A perfectly understandable response, if you ask me. One minute you’ve been sacked by a car factory, then next you’re bombing around the Arsenal training ground with Mesut Ozil, Alexis Sanchez and the rest. It must have been completely surreal for the young man, but he obviously did enough to convince Arsene Wenger who said:

He is a young, promising left back who has a lack of experience at the top level but who has fantastic ingredients. He has tremendous pace, a good left foot, a great desire to do well. Overall, he’s a very exciting prospect.

Now, he’s unlikely to say anything different, and the reality of his situation is such that it’s going to take a monumental amount of work, and no small measure of good fortune to become a first team player at Arsenal. However, I think there’s something to like about this story even if he doesn’t make it.

Even before the Premier League became the cash-rich monster it is today, we’d have raised eyebrows at the idea of a 20 year old player coming from outside the professional leagues (I think the Evo-Stik league is about 7th or 8th on the tier), and being signed by a club like Arsenal.

Nowadays, when there’s so much money, when the gap between the top and the rest has widened so much, it’s practically unthinkable. We’ve seen a few players come from lower leagues before, and during Arsene Wenger’s reign he’s taken the likes of Alberto Mendez from the German non-league side SC Feucht, and Amaury Bischoff from Werder Bremen’s second team, but neither of them made any first team impact.

A 17 year old Gael Clichy from Cannes (then in the 2nd or 3rd division) is one whose trajectory was very different, but even then he was younger, more mouldable into what Wenger would want from an Arsenal player. So that’s the kind of bridge Bramall has to cross, and there’s no doubt it’s going to be tough, but even being handed that opportunity makes for a nice story in this cynical football world we live in.

The manager drew parallels with players like Laurent Koscielny and Olivier Giroud who made their breakthroughs at a relatively advanced age, and it’s not the first time he’s referenced young players who have grown up outside the Premier League academy system.

Yesterday he said clubs have to look ‘more and more’ at the lower leagues for talent:

You need to scout in the lower divisions because many of them [players] have to go down before they go up. And he’s one of them

Last year he spoke specifically about how life at big clubs makes young players less hungry because they’re so well looked after:

I’m scared we [football in general, not just Arsenal] now have players under 17, under 18, who make £1m a year. When Ian Wright was earning that, he’d scored goals, he’d put his body on the line. Now, before they start, they are millionaires – a young player who has not even played.

And how he’d instructed Arsenal’s scouts to keep an eye on players they might normally not have considered because of the level they’re playing at:

I’ve said to our scouts to do the lower leagues because the good players are there now. Don’t forget we have many foreign players in the Premier League, but good English players have to go down to develop.

And why those players might have something that the academy prospects don’t:

What I think will happen is that you will have more and more players coming out of the lower leagues who have had to fight their way through. Compare that with a player who has been educated here, who has had Champions League for 17 years, who has not known anything else.

It’s not a dream, it’s normal for him. But if you play for a team in the lower leagues and watch Real Madrid or Barcelona on Wednesday nights you think: ‘I’d love to play in games like that.’

Now, whether this is the start of something more regular, or a shot in the dark with a young guy who flew across our radar remains to be seen. But you can also see the logic in what he’s saying. There are always going to be late bloomers, and players who don’t get a chance because of any number of circumstances. And the litany of exciting prospects and next-big-things from our academy who didn’t make the grade is huge.

Koscielny didn’t play top-flight football in France until he was 23, I think Didier Drogba was 24 before he played in Ligue 1, but it’s also fair to say those players are the exception rather than the rule. Still, this is a move with little or no downside for the club. Financially it’s peanuts, and if he develops into a player who can make it in the first team here, then we’ve unearthed a gem.

If not, it’s not the end of the world and he’ll go with an Arsenal stamp on his football passport which will probably help him get a decent move and another chance to make the grade somewhere else. One thing I would say is that our left-back situation is one which probably needs to be addressed during the summer, and over the last 12 months we’ve been linked with any number of young players for that position – of varying degrees of experience.

I guess that means there’s perhaps a difficult path to first team football that might not exist with any other position at the moment in time – although our need for solid, reliable back-up for Hector Bellerin is obvious too. So, good luck to him. As he said himself:

A wise head on relatively young shoulders. Right, that’s that for this morning, have a good one.