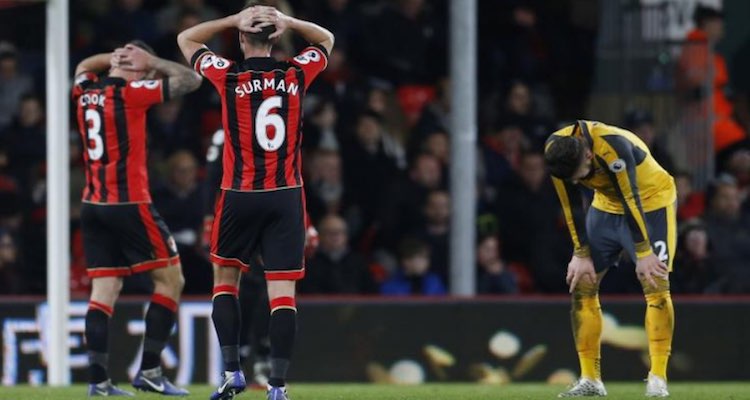 Is there such a thing as a disappointing comeback from 3-0 down to steal a point in injury time? I guess it’s not the comeback itself that’s disappointing, but what came before it.

Usually though, when you turn the tide of a game in that way you tend to feel somewhat uplifted, but even in in the cold light of day – where you can appreciate the way we dug in to get something from a game from which we looked destined to get nothing – the overall feeling is one of frustration and deflation.

One of the old cliches of football is how it’s a game of two halves. Last night Arsenal were abject for 70 minutes, but staged a thrilling fightback in the last 20. This was a game of a half and half a half, and a half a half.

Bournemouth’s first goal was ludicrously easy. Hector Bellerin was pulled too far inside tracking his man, and never looked back to see if there was danger where he should have been. Aaron Ramsey saw the danger but didn’t do enough to cover the space, and when they played the ball to Charlie Daniels he beat Bellerin too easily and Cech too easily to put them in front.

Suggestions that the fixture pile-up was somehow to blame don’t really hold any water when it was Ramsey, a player making his first start after a long period out of the team and thus relatively fresh, who was found wanting for a significant part of it.

For the second there was no lack of energy from Granit Xhaka, playing his second game in 48 hours, as he tracked the run of Fraser in exactly the way he should have. Unfortunately a rush of blood saw him commit an egregiously stupid foul in the area and the referee pointed to the spot. All he had to do was stand up, force the guy wide, and he’d have done his job perfectly, but instead he gave them the chance to double the lead which they did because conceding goals from penalties is a big part of what we do this season.

Bournemouth were playing with real confidence and curled a shot just wide before the half-time. It might have been worse at the break, but it wasn’t far into the second period when they added another. Now, I thought it was a foul on Bellerin. If we’re going to criticise Xhaka for the foul that led to the penalty, I don’t see how we can write off what was a clear shove on the Spaniard.

Still, the defending and goalkeeping after the fact was abysmal again, and the short round lad with no neck put it between Cech’s legs to make it 3-0. Arsene Wenger reacted, putting on Lucas Perez for Alex Iwobi and Gabriel for Laurent Koscielny (a move I hope was because of fatigue rather than injury).

The Spaniard made a difference to the way we attacked and we looked more threatening. Some of that was down to the momentum of the game – with a 3-0 lead Bournemouth were naturally inclined to sit off, and when Giroud did well to keep an Oxlade-Chamberlain cross alive, Alexis was there at the back post to head home and get one back.

Five minutes later Xhaka fed Giroud in the box, he clipped a lovely ball over the defence which saw Lucas readjust his run and crack an outstanding shot into the far corner of the net. A really fantastic finish and his willingness to get in the box and drive at the Bournemouth defence paid dividends.

Arsenal had 15 minutes plus injury time to save the game, but could – and should – have been dead and buried when Gosling found himself with just Cech to beat. I have no idea what our defenders were doing or how he ended up with that much space, but thankfully for us he curled his shot wide.

That it was followed by a red card for Simon Francis meant the pendulum swung back our way. It was a ridiculous challenge on Ramsey, I don’t think he can have any complaints, and it pushed Bournemouth back further.

As we pushed for another goal Ramsey shot wide, Giroud had one blocked at the near post, but in the second minute of injury time Xhaka’s cross from the right was met by the Frenchman who capped an outstanding contribution by nodding home – the ball creeping just inside the post. He ended the game with two assists and the goal that levelled things.

I’ve seen criticism of his celebration, but I really think that misses the point. Much like Arsene Wenger getting furious with Petr Cech and Mesut Ozil for dithering over a free kick in the dying seconds of injury time in the 2-1 defeat to Man City, the issue is what came before. Giroud had just scored an equaliser in injury time and while we could have run back as quick as Usain Bolt, there was nothing to say Bournemouth would have matched our alacrity and kicked-off again as quickly. It’s misplaced anger really.

Even at 3-3 the game had life left in it, Cech had to make a big save from Harry Arter to keep us ahead, and against 10 men to allow that kind of chance so late in the day having got back level is basically ludicrous.

In the end we came away with a point that we never really looked like getting for most of the game, so on one level you have to be happy that we got something rather than nothing, but ultimately it feels far more like two points dropped than one gained.

The faces on Aaron Ramsey and Olivier Giroud as they spoke to Sky afterwards told their own story. It was go through the motions, full-on media training stuff, as they reluctantly admitted there was some character shown to make the comeback.

And look, that’s true to an extent. Any team that stages that kind of fightback in the last 20 minutes has to have a measure of desire and resolve, as well as quality. But there’s also the very good argument that a team with real mental strength and character wouldn’t be down 3-0 in the first place.

This was a game we really had to win, and we’re now relying on Sp*rs getting something from tonight’s game to ensure the gap between us and Chelsea – for all that seems to matter this morning – isn’t extended further. If it is, that’s that for this season and the title challenge beyond an absolute miracle, and it’s difficult to look at this side as one capable of performing one of that magnitude.

Afterwards, Arsene Wenger spoke of Bournemouth’s quality but also how the fixture list had played a part:

Bournemouth deserves a lot of credit but I think the disadvantage is too big [for us] to play a team who has over three and a half days recovery. We played on Sunday late afternoon; it’s too big a handicap at the start.

I think as well, they are a good side, they are a good team, they have quality and played at a tremendous pace and made many runs behind our defenders. They looked always dangerous and committed, that’s why the game was difficult.

I’m behind praise for Bournemouth, they were very good until that last part of the game when they imploded in an Arsenal-esque fashion, but I don’t buy into the excuse that the schedule is what cost us the goals we conceded. Yes, it’s difficult to play twice in 48 hours, nobody is disputing that, but we know this is an issue at this time of year, and it wasn’t fatigue or tiredness that was at play – it was down to concentration and discipline.

Those are basics – things the level of which you should be able to maintain even if your legs are feeling a bit heavy – and we were found wanting and punished for it. Overall it was a night where you have to give the team some credit for the way they scrapped something from the game, but one which ultimately disappoints because of how poor we were in the first place.

There are also other issues in the wake of this one. A hamstring injury to Francis Coquelin leaves us with just Aaron Ramsey and Granit Xhaka as fit central midfield players, a situation which at least gives us a chance to see them together as a pair, but leaves us no wiggle room for rest or injury until we get Coquelin and Elneny back. I also wonder what Jack Wilshere thinks now as he sees yet another door to first team football at Arsenal open up while he gets fit on the south-coast. Marry in haste, repent at leisure.

Some of it, I think we have to admit, comes from how well Chelsea have been doing. It changes the perception of your own season when a direct rival pulls off 13 wins in a row, you look worse in comparison of course, but before this game he said it was important to hang on. Unless that lot manage to take something from Conte’s team tonight, we’ve more or less let go.