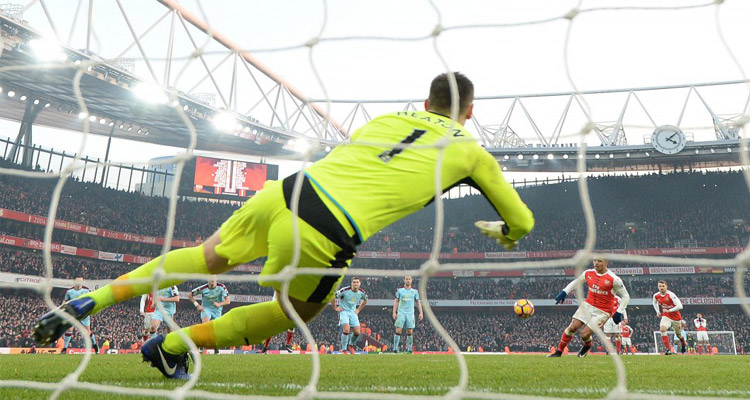 Holy moly, where do I even start this morning? At the end of the game I was left kind of shell-shocked, in that way that only Arsenal can leave you. Put through the wringer, but in the end we came out with three points.

I guess the best way is to go through it bit by bit and hope we end up with something coherent. I’m still not right.

By comparison with what came later, the first 45 minutes were a relatively tame affair but there was still plenty going on. Arsenal had 14 attempts on goal, but with just 3 on target they were as threatening as Burnley were. Petr Cech had to make a couple of saves, our finishing wasn’t as clinical as it might have been, but it was a much more open game than I had thought it might be.

Burnley looked to press us high up the pitch before they retreated defensively, and I thought we coped pretty well with that overall. Granit Xhaka and Steven Defour had a little coming together which may have had an influence on later proceedings, but generally Arsenal looked like the team in control with 75% possession and more shots.

We started the second period brightly. There were attempts from Monreal, Ramsey, and Alexis, before Mustafi got elbowed in the face for the first time. The German should have had a penalty too when he was clearly brought down in the area, but Jon Moss incorrectly waved play on.

The dust had barely settled on that piece of terrible refereeing when we went ahead. Mustafi flicked a header from an Ozil corner into the far side of the goal, the despairing dive of the goalkeeper wasn’t sufficient to keep it out. His first goal for the club and just what we needed.

What we didn’t need was what happened next.

Ok, the first thing I’ll say is that yes, he needs to be smarter when he makes challenges, and he has to stay on his feet. It was a also an unusually careless pass that caused the trouble too. However, having watched it numerous times, with all the replays, I think it was a harsh red card. Or, at least, the reaction to it has been harsh. I know you can only view the incident on its own merits, but when you compare some of the challenges that have gone without a red this season, it’s annoying that he’s now going to serve a 4 match ban.

It’s lengthier because of the ridiculous red the same referee gave him against Swansea earlier in the season. Not before or since have I seen any player sent off for that particular offence, and I feel a bit for Xhaka. MOTD 2 did a real hatchet job on him last night, as if he was a player who does nothing but foul his way around the pitch.

I think he’s been unlucky this season and the reputation he’s got is pretty unfair. The Swansea red card is never a red, and the penalty against Stoke was down to his size more than any real foul play. The penalty he conceded against Bournemouth he can no complaints over (worth pointing out he was the man getting back and doing his defensive duty?), and yesterday he gave a referee who clearly has it in for him the chance to send him off again.

However, I enjoyed this observation from Goodplaya:

Watching the highlights, Xhaka has an almost unique ability to make his fouls look worse than they are.

And the anger/frustration over the red card means that what he did before that will be forgotten. I thought he was probably our best player, he defended well at times – one incident in particular he chased back to bail out Mustafi who had got turned too easily – and he was working well with Ramsey. His passing range is superb, and now we’re going to be without him for four games which is a real shame.

While I understand some criticism, I think some of it has been too harsh for what he’s actually done. He has to learn, of course, but don’t crucify our man when I think Jon Moss plays far too large a part in the fact he’ll miss 7 games of this season.

With Coquelin on for Iwobi in midfield, we looked to see the game out with 10 men. Quite where Jon Moss got 7 minutes of injury time, I’m not sure. Perhaps some of it came from the bloke who scythed down Ozil and injured himself in the process (only a yellow card), but it seemed ridiculous at the time. Ultimately though, it would prove our saviour.

We might have extended the lead before all the drama. The keeper saved from Coquelin, and the Frenchman’s ball through to a less rusty Danny Welbeck would probably have seen the striker score on another day. However, as the ball bundled around in our box, he hung out a leg which the Burnley player naturally went over and Moss pointed to the spot. It was a nailed on penalty. It’s worth watching Monreal’s full on Platoon reaction when the ref gives it.

Gray put straight down the middle, Cech got something on it but couldn’t keep it out and that appeared to be that. It left the Arsenal bench furious, and Moss wasn’t about to pass up the chance to thrust himself further into the spotlight and gave the manager his marching orders.

It was heat of the moment stuff, and the moment was very heated, but Wenger was immediately contrite after his coming together with Anthony Taylor. The 4th official insisted he go down the tunnel, the Arsenal manager appeared to gently push him, a steward stepped in and that was that.

I didn’t know if I was sent to the stands but I was sent out. I thought I could watch it from the corridor, you know. I went inside and watched it on television. I regret everything. I should have shut up, gone in and gone home, basically. I apologise for that.

Already there are calls for a touchline ban, and it would be a surprise if that wasn’t the outcome. Whatever you think of Anthony Taylor (in my case not very much), there’s a line you shouldn’t cross and that’s it. I do wonder what it was Wenger said that was worthy of a sending off though. Was it any worse than anything said by Sean Dyche, in the ear of the officials all game moaning about every little thing?

Anyway, we’ll have to wait and see what happens here, but the manager could well find himself in hot water for this one. I don’t blame him for being upset and frustrated, I think we all were, but he has to handle himself differently than any of us.

So, it looked as if we were going to drop two points, until:

Arsenal are awarded a penalty

It’s almost the end of the 7 minutes of injury time that we despaired about when the board went up. Mustafi and Alexis exchange passes after a corner. The crowd is urging them to get the ball into the mix. Alexis clips it in towards the back post, Koscielny is initially offside, moves back, moves towards the ball, and then gets studs in his face.

Definite Penalty. Unbelievable. Dyche is going bananas, so are the Burnley players. Look at the guy in the background as Gabriel celebrates the award. Is that acceptable behaviour towards an official or is it just a bit of swearing that’s worthy of a sending off? I thought there were new rules this season for that kind of thing. You know, like the yellow card Mustafi – twice elbowed in the head without a card being dished out –picked up for shouting at the linesman from distance late in the game?

Must be just me. Also, isn’t raking your studs down someone’s face the very epitome of reckless play that endangers an opponent and thus a red card?

As for Dyche’s complaints, a top-level referee pal of mine said afterwards:

I don’t know what Dyche is on about. If Koscienly gets his head kicked by a Burnley defender, it’s a penalty whether he’s offside or not. If a player punches an opponent who is offside does he think it shouldn’t be penalised because the offside should be given first?

So, with first choice taker Olivier Giroud off the pitch, Alexis Sanchez steps up. A man who has never scored a penalty for us. A man who, if I remember correctly, has missed at least two in his time. It’s the 97th minute. It’s a game we have to win. There’s no margin for error here.

I’m thinking ‘hard and low into the bottom corner’, but then I’m not Alexis Sanchez. He runs up, clips it gently down the middle of the goal as the keeper goes the other way, it’s 2-1 Arsenal and the game is won. Amazing. Alexis looks up at his dog banner, and thinks ‘I am, I am a good boy!’, and he is. He’s a very good boy.

Talk about balls to take a penalty like that in those circumstances. Blimey. And he celebrated the shite out of it too. What a way to finish a game.

And you know what, there’s something wonderful about winning a game that late. There’s something just a bit magic about breaking the hearts of the opposition. I love a win that makes me forget all the things that frustrate me about our team and channels that into hating everything that isn’t us. A win that sees opposition fans latch onto your Tweets about the game and for them to tell you to go and kill yourself.

No, how about I sit here and laugh instead while I continue not to give a single, solitary shit about you or what you think of the way the game went.

A few weeks back, Arsene Wenger bemoaned the lack of ‘spectacularity’ in the Premier League this season. A routine 4-0 win over Swansea doesn’t provide much of that, but yesterday sure did. It was a bonkers, lunatic, madcap, heart-stopping dose of the stuff, and when the dust settles the three points were so vital considering Chelsea continued their good form and beat Hull.

Anything less than a win would have been a disaster, and regardless of how late it was, that’s what we got. There’ll be plenty more to come from yesterday’s 98 minutes, but for now we sit in second place, and the chase is still on. It’s been a pretty good weekend for us overall, but how we cope with the bans that are set to come our way means this particular game with resonate for a while yet.

I think that’s everything.

There’s lots to discuss on today’s Arsecast Extra too. If you have questions for myself and James, please send them to @gunnerblog and @arseblog with the hashtag #arsecastextra. We’ll have that for you before lunchtime.

Arsenal 2-1 Burnley: Midfield drive the performance as the strikers win the points