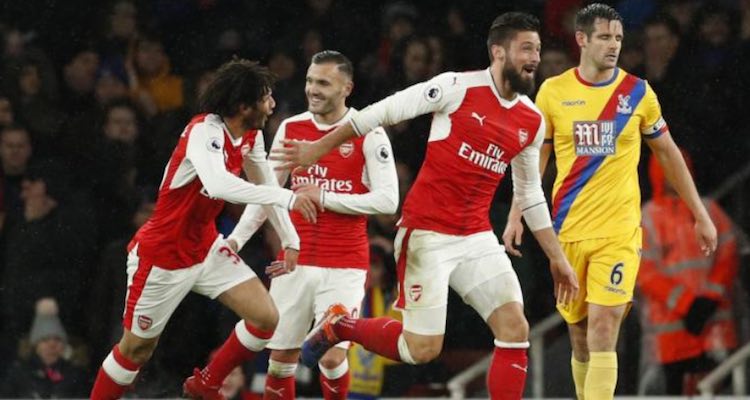 It began when a switched on Lucas Perez tracked back to intercept a Palace pass just outside our box. From there Hector Bellerin took it on and fed it into midfield where Olivier Giroud, back to goal, flicked it between his legs to Granit Xhaka.

The Swiss international played a simple pass to Alex Iwobi, who played it perfectly into the path of Alexis Sanchez who had made a bursting run down the left. The Chilean took a touch, stepped inside, and crossed it towards Giroud who had run from inside our half to inside their box.

It was the only imperfect pass of the move, but in being that it helped contribute to what was a truly sensational goal.  The fact that the pass was slightly behind Giroud meant he, at full pelt, had to improvise his finish in a split-second. It was pure reflex, hooking the ball with his heel and beyond the despairing dive of a goalkeeper who couldn’t have been expecting that. The fact that it crashed in off the underside of the crossbar made it even sweeter, there’s just something special when the ball hits the woodwork and goes in in that way.

Had the pass from Alexis been better, we might have had a more routine finish (or no finish at all), and I don’t think we’d be talking as much about it this morning. The one small flaw in the move ended up being the catalyst for the thing that made it so special.

The Frenchman’s face after scoring told its own story, and his insistence on being humble afterwards and saying he got ‘maximum luck’ should take nothing away from it. Yes, it’s one of those things that doesn’t come off most of the time, but it wasn’t a fluke. It was very deliberate. In that instant when he realised the Alexis pass was behind him, he tried the only thing he could given his position and that of the ball, and it worked perfectly.

I don’t quite understand people’s need to be curmudgeonly about it, other than I suppose there are folks who exist simply to suck the joy out of every little thing. Joy Vampires. Jompires, I will call them from now on. Listen to the gasps in the stadium from the people who were fortunate enough to be there to witness that live.

If, after 10 repeats from 8 different angles, you’ve come to the conclusion that it’s ok but not that good; or if you have to immediately rattle off 10 goals you think are better; then get back in the shadows and I’ll hold up some football garlic to keep you away.

The move, the finish, the celebration – if you can’t get moved by that at all, why do you even bother?! As Arsene Wenger said afterwards:

I think it was an exceptional goal because it was at the end of a fantastic collective moment, which is what our game is about. He transformed that goal into art – because of the surprise, because of the beauty of the movement and because of the efficiency. People come to the games to see these kind of goals.

Just the other day he was bemoaning the lack of ‘spectacularity’ in the Premier League, and on the first day of 2017 Giroud brought some of that with a goal that is unlikely to be bettered this season. If if is, all we can do is admire what will be a truly magical piece of football. In the meantime, we can still relish this one because it really does merit repeat viewing (see all the replays on our video page).

On a wet afternoon in North London, that 17th minute moment was undoubtedly the highlight of the game, but there was still plenty to like about performance. Granit Xhaka is really cementing his position as our midfield fulcrum, so much of what we do goes through him. He makes more passes than anyone else and the way he shifts the ball about the pitch is so impressive.

Without Mesut Ozil, bed-ridden with illness, Alex Iwobi played in his position, and I think we can see that in the long-term that’s probably where his future lies. He’s versatile, and will play a lot of his football on the flanks, but as he matures and develops, it’s hard to see him stay out there because he really doesn’t look out of his depth in that floating number 10 role.

And outside him yesterday the relentless Alexis Sanchez wasn’t saving anything for Bournemouth tomorrow night. He kept trying to make things happen for himself and others. With eight attempts on goal and five chances created for others, his desire to make an impact was brilliant to watch. If he seemed cheesed off at the end, it’s because he probably knew he should have scored, but even without a goal to his name his contribution was superb.

The game was made safe early in the second period when Iwobi headed home, and although Cech had a busy 60 seconds – saving three times in a minute – Palace offered little. Gabriel and Koscielny rendered Benteke more or less invisible, our full backs kept their wide players occupied, and the fact we scored relatively early meant we didn’t have another West Brom style shitfest on our hands.

It also felt like the players were keeping something in the tank for Tuesday, and all in all it was as comfortable a 2-0 win as you’re likely to see. It’s also worth pointing out that after two and half months without a clean sheet, we now have two in successive games, and that’s good to see.

Afterwards, the manager had particular words of praise for Giroud, saying:

What is maybe not enough acknowledged by people, maybe even by me, is that Olivier scores important goals. He scores at Man United with a special header this season to make it 1-1, he scores against West Brom in the 87th minute. He scores goals that have a weight in the result of the team.

Look also at his double when he came on against Sunderland at 1-1 to help take those three points back from the north-east. To say he’s a plan B does him something of a disservice in my opinion, and while my preference remains Alexis up top right now, Giroud provides us with great attacking depth – something we haven’t had for a long time.

I’ve written here many times that our issue really hasn’t been Giroud himself, but the burden and expectation placed on him as a striker. He now has 7 goals this season from just 4 starts, and the fact others are picking up some of the goalscoring slack means the onus isn’t always on him to produce as it has been in seasons gone by.

So, all in all a very nice start to a new year, but one we have to put behind us quickly. The ridiculous schedule now means we have to face Bournemouth tomorrow night with little time for recovery. We can focus on that game tomorrow, for now a big handsome French doff of the cap to Giroud for what was a truly special goal.

James and I will be here later with an Arsecast Extra to discuss the goal, the win, and everything else. If you have any questions, please send to @gunnerblog and @arseblog on Twitter with the hashtag #arsecastextra. We’ll also put up a post on the Facebook page if you feel like contributing that way.