Yesterday, as I was having something of a mid-afternoon Arsecast crisis, I was going through some old files, and found a thing I’d done involving actor Sean Bean. It was a silly little skit about how he always gets killed in the movies and TV shows he’s in.

Like Game of Thrones, when they chop his head off in the first series. And don’t start at me about spoilers, it was years ago and if you haven’t started it watching it yet then don’t worry, there are lots of dragons with boobs and swords to take your mind off it.

That’s not the point though. I have no recollection whatsoever of creating it, or indeed why I would create it in the first place. He is, as far as I’m aware, a fan of Sheffield United. Ah, remember that time we played Sheffield United in the FA Cup and Kanu scored that goal when we should have thrown the ball back to them and Steve Bruce threw an absolute tantrum on the sideline and tried to get his players to walk off?

That was fun. We offered them a replay, because we’re good like that, and when Bruce suggested it be played at Bramall Lane Arsene Wenger said, ‘We’re fair, not stupid’, or something along those lines anyway. In the second game I think Dennis Bergkamp scored the winner with a delicious chip. Or maybe I’m mixing it up with another goal against Sheffield United. Or even some other team or game.

The big question is does it really matter now that so many years have passed? I can remember it how I want. Well, that is until someone comes along to ‘correct’ my version of events and then that part of my brain goes ‘Pfffffff’, and then all the memories are splattered together like a Jackson Pollock painting and I wish they had just left me alone.

Update: Someone has come along and reminded me it was Overmars who scored, Kanu who provided the cross. See what I mean?!

I don’t know if Chris Morgan was playing in that game, I could look it up, but I choose to believe that he was and that Dennis made him look like a right chump. He was an elbowy old bastard. I feel ok calling him ‘old’ even though he’s younger than me. He looks older, even if I have glasses now. Elbowing people relentlessly can take a lot out of you.

They say that smoking ages people prematurely. So, if you had identical twins and one them smoked and the other didn’t, the non-smoker would look really young and the one who chugged away on 20 Gitanes a day would show the effects of that. Imagine if former Arsenal player and Invincible and with hindsight not as bad a player as everyone thought he was just paled into relative insignificance by the genius he was surrounded with, Pascal Cygan, had a twin and the twin smoked. This is what it would look like: 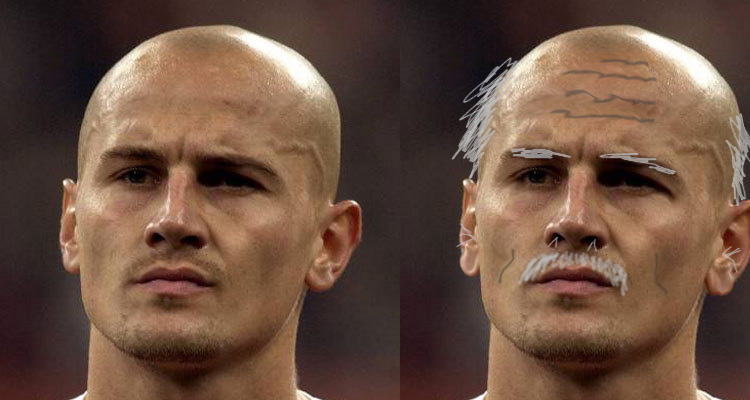 As you can see, the non-smoker on the right has aged gracefully, while Smokey Cygan on the left looks ancient and decrepit. It’s the very same thing with elbowing and Chris Morgan. Not one of my favourite players, but with hindsight I do recall him pummelling Robin van Persie in one game, so perhaps he knew something we didn’t.

It’s why I’ll always have a bit of a soft spot for Nicklas Bendtner. Did he waste his talent? Yes. Did he try and make sweet, sweet love with a taxi? Yes. Did he then call the taxi driver who objected to his car being frotted by a pissed-up Arsenal striker a ‘little piggy’? Yes, yes he did.

But he also spotted the fact that Emmanuel Adebayor was a twat well before the rest of us. Imagine how he must have felt, knowing that he knew something like that, but nobody took him seriously. It’d be like knowing a meteor was going to crash into the earth and trying to warn people and everyone saying ‘Nahhh, relax. The meteor is having a cracking season and is scoring lots of goals. Nothing can go wrong.’

Fast forward a little while later and meteor is scoring against you for Man City then running the length of the pitch to celebrate in front of the fans of the club he contentiously left, driving some of them completely mad.

“Ooooh, I’m gonna get you space rock!”, says one as he charges down to the front of the stand, held back by stewards.

Wouldn’t it be amazing if all stewards were called Stuart? I think it would, and that’s all that counts.

Time now for this week’s Arsecast Extra and after the defeat to Everton in midweek I’m joined, after a Skype outage that put the whole show in jeapordy, by Julian H from Gingers4Limpar. We discuss the performance, team selection, substitutions, what the loss of our unbeaten run might mean, Pep Guardiola and the game coming up this weekend against Man City. There’s the Angriest Man on Twitter, and lots of the usual waffle, and a chance to win real cash with FanDuel.

Sign up at fanduel.co.uk with the promocode ARSEBLOG30 and if you deposit £10 they’ll give you £5 a week to play with for the next 4 weeks. That’s £20 free credit.

The manager meets the press this morning, so we’ll have all the news ahead of the Man City game over on Arseblog News. For some extra reading this morning, Tim Stillman looks at the left-hand side conundrum in his latest column.

The Gent will be here later on, more from me tomorrow.