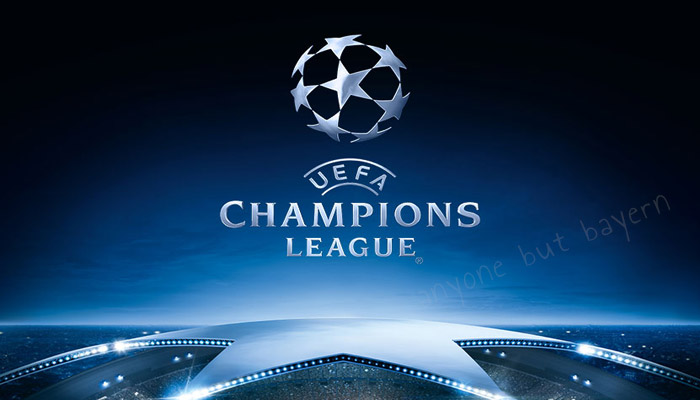 So the Champions League group stages are over. Three of the four English teams that qualified for this season’s tournament made it through. Arsenal, of course, along with Man City and Leicester City.

One team did not. Poor old Sp*rs, now consigned to playing Europa League football at Wembley. No doubt that will set all kinds of records again. You can almost see the Twitter posts now: 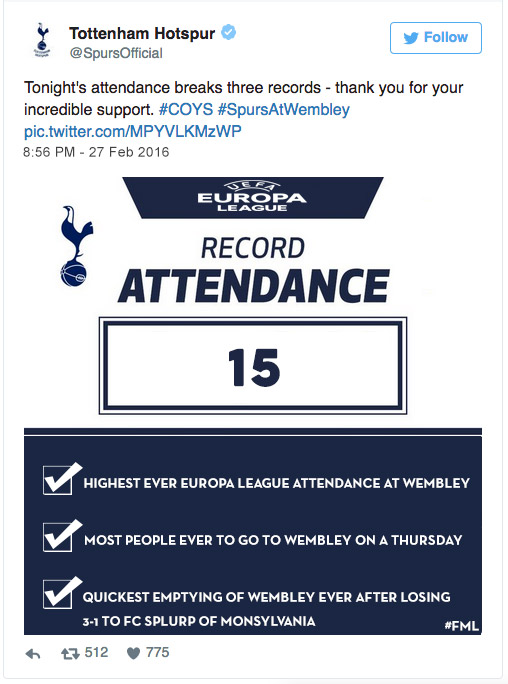 Meanwhile, Arsenal are set to find out on Monday who gets to knock us out in the Round of 16. The draw will take place after all the usual nonsense when they got some lad who won the Champions League and conduct an excruciatingly awkward interview with him in his own language, before it’s translated for the rest of us as our toes curl. Then the baldy lad who is not at all corrupt like Sepp Blatter, will announce details of a 125 team World Cup taking part in Hell because it’s about time Hell got the World Cup finals and not because they back-handed a load of money to people to make it happen or anything like that.

Borussia Dortmund’s late goal against Real Madrid last night meant they topped their group, and I did see some people bemoan that fact because now we can be drawn against Zidane’s side. That would be a very difficult game, no question, but I’m not sure I’m on board with the idea that Dortmund would be that much easier. They’re very good indeed.

The other one we want to avoid is Bayern Munich. Another great side, no doubt about it, but I think I would just pass out from boredom if it were them again. If that did happen, it’d be the third time we’ve got them in the first knock-out round since 2013 and we also had them in the group stages last season. I’m not saying I’m sick to my core at the very sight of them but … no, wait, that’s pretty much exactly what I’m saying. I want some goddam variety to our European exits.

So, who else apart from Real Madrid or Bayern Munich can we draw? The other potential opponents are Sevilla, Porto, Benfica and Bayer Leverkeusen. Varying degrees of difficulty there. Sevilla would be a lovely trip to a great city, but they really are a decent side. The others you would, if you could put our record at this stage of the competition aside, probably fancy your chances against.

And look, I’m all for a draw which makes life as easy as possible. This whole ‘If you want to win the Champions League you have to beat the best teams’ line of thinking is fine, but I’d be quite happy beating a load of bang average gunthers all the way to final to face some spawny pack of halfwits whose luck runs out and they end up on the end of a serious beating from us.

Would I consider it less of a Champions League win if that were to happen?

Anyway, we’ll find out on Monday. We’ve done as much as we could, topping the group with a little help from our Bulgarian friends, so let’s hope that for once the draw is kind, and not a big smelly bastard who sits next to you on the bus first thing in the morning and who never covers his mouth when he coughs spittle and micro-mucus into the air right in front of you. I hate that guy.

So, what else is going on? Not a lot really. The Ozil/Alexis contract stories continue and if I were you I’d get used to this being a never-ending saga until such time as it eventually ends, one way or the other. When negotiations like this are going on, there are all kinds of angles and tactics at play, from both sides. The players agents leak stories linking them with MASSIVE MONEY MOVES to places we all know they won’t go, but that’s to say ‘Look at how much we can get elsewhere’.

Arsenal, meanwhile, will say almost nothing which will lead to accusations of dithering and/or inaction, but in reality we just don’t do business that way. Both players are in a very strong position to negotiate bumper deals, and at 27 (Alexis) and 28 (Ozil) these are probably the last major deals they’ll sign in their careers if they commit their future to Arsenal for the next four seasons or so. Naturally, they’re going to try and get the best contracts possible, commensurate to their age, experience and standing as two of the best players in Europe, and that does make things a little more challenging.

Ultimately though, as a club we have to look at the cost of replacing them if they do go, the difficulty in finding players of similar quality, and what the perception of losing one or both of them would be to us. Not to mention how much their departures would weaken us from a footballing point of view. It’s one thing when you can’t compete with the biggest clubs financially, but with TV money splashing around like nobody’s business, that’s no longer the case.

That said, it does look like both players are enjoying themselves at the moment, and if they feel they’re part of a competitive team that can properly challenge to win things, then that will increase our chances of keeping them. It’s also worth pointing out they both have a role to play in doing that for the team, but this season they’ve done exactly that, highlighting their importance time and again.

Let’s hope we can find a solution, but in the meantime try and view much of the faff around as exactly that. Right, that’s that for this morning. I’m back tomorrow with an Arsecast, Tim is here later with his weekly column. Until then have a good one.

ps – A few people have asked me lately why you can’t comment on Arseblog articles, and it’s true that the commenting system is different to that of other blogs. Look under the headline and see ‘X arses’, where X = a number of some kind. You have to register a username etc, but after that you can comment freely.

If you’re popping in for the first time today, make sure you read the Terms and Conditions, then say hi.