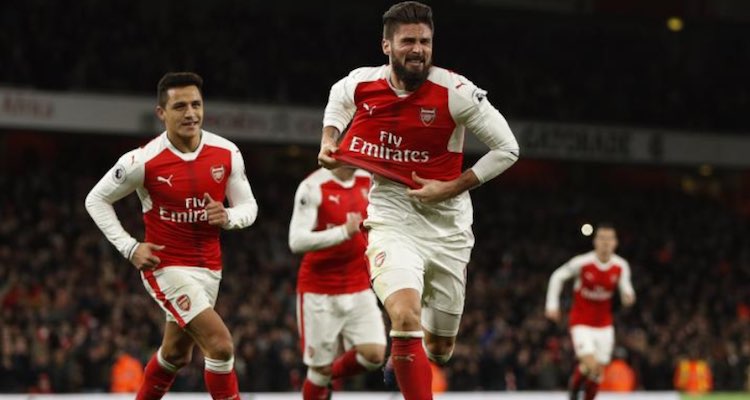 Before the game the consensus was that West Brom would come, sit deep, defend like crazy, and try and frustrate Arsenal the way other teams have this season. So, it should be no surprise that that was exactly what happened, and boy did they come close to frustrating us to the maximum.

In the end a wave of Ozil’s left foot and sheer strength and determination from Olivier Giroud to head the ball home broke the deadlock. And despite how painful it is to sit through a game in which we dominated possession, territory and chances, I don’t think anyone can argue that we didn’t deserve it.

Arsenal bossed this game from start to finish, and while the first half was certainly a bit more pedestrian, in the second we really tried to turn the screw. We made chances but found Ben Foster in outstanding form. The West Brom keeper made 10 saves in all, two or three of them were absolutely brilliant, and by any measure it’s a game that only one team tried to win.

The selection of Olivier Giroud up front was not much of a surprise, but I thought our reluctance to give him any service in the first half was a bit odd. I get that we’ve been playing most of the season without a target man so perhaps the first thought isn’t to sling in crosses, but I lost count of the times we got into decent positions – especially on the left – and cut back rather than attempt to find Giroud.

There’s a good argument to make that a team as big and tall as West Brom would be happy if we did that, but a little variety is no bad thing and when you look at where the winner came from we might have been a little more adventurous in that regard in the first period.

Coming into this game on the back of two defeats played a part too, there was a nervousness, and no small amount of pressure. Nobody expected Chelsea to do anything but win, so any further dropped points would have made what is currently a very challenging situation an almost impossible one.

But in the second half we just kept hammering at the stripey Pulis shaped door until we eventually knocked it down. 16 shots, 11 on target, 1 goal. Was it difficult to sit through? Of course. When it gets that late in the game you’re already fearing the worst, but with Lucas Perez and Aaron Ramsey on to give us something a little different up front in midfield and attack, it worked out.

Having worked the ball down the right, it came back to Ozil whose cross was brilliantly headed in by Giroud. When you look at how the defender had no interest in the ball and only in holding onto the Frenchman, to show that amount of strength to keep himself the right side of the ball and then direct his header in was fantastic centre-forward play (see the goal on our video page).

We might have added to the lead afterwards, again Foster was in superb form, but ultimately he gave us that wondrous Christmas gift of seeing a keeper labour over every. single. goal. kick. for …. the …. duration ……….. of.

Then hurry hurry hurry after conceding a goal. Marvellous japery altogether, made even more fun by the fact he’d played so well. One of those performances we’ve seen the opposition keeper have down the years. I think there was a Fulham game years ago in which Edwin van der Sar set the blueprint.

We created plenty of chances. We needed today to be patient, keep our composure in our game and not make a defensive mistake – that’s what we did. We kept going and in the end when we couldn’t make the difference on the ground, we made it in the air with maybe the only player in our team who can do that.

And on the pressure to get the win:

You’re under pressure, you know they defend deep, they are well-organised, they are resilient – we are super-favourites. And you can just have a big problem if you don’t win the game because mentally of course, if you don’t win for three games, it’s always difficult.

Hard to argue against that, and obviously the goal changes the perception of the performance to an extent. I thought we played pretty well in that second half, but had Giroud not done what he did, there’d understandably be a different outlook.

Just by some measure of comparison, when Chelsea played West Brom at home the other week, they won 1-0 thanks a Diego Costa goal. On that day West Brom did exactly what they did yesterday. They sat deep, they defended like mad, and Chelsea only had two shots on target in the 90 minutes. Afterwards, from our perspective at least, it was the kind of win that is grudgingly admirable because you grind it out on a difficult day.

So as much as it was hard to sit through, the same should apply to us. Not only did we grind it out, we did it with more shots, more shots on target, which speaks to causing their defence many more problems than Chelsea did.

That’s not to say that we were flawless by any means, or that it was particularly enjoyable. It was far from our best performance of the season, and you might ask some questions about the team selection, but we needed a win and we got a win. I’m not going to talk about character or mental strength to keep going right until the end, but it’s not the first time this season we’ve bagged an important late goal.

Hopefully the team can take some confidence from the second half in particular and the chances created which, on another day, a less competent keeper/more efficient finishing, would have seen us score earlier and more often. It’s also likely to have been good practice for what comes next: Sam Allardyce’s Crystal Palace who will probably play in a similar way to West Brom.

Still, it’s nice to end 2016 with three points, a first clean sheet in ages, and let’s see where we go from here.