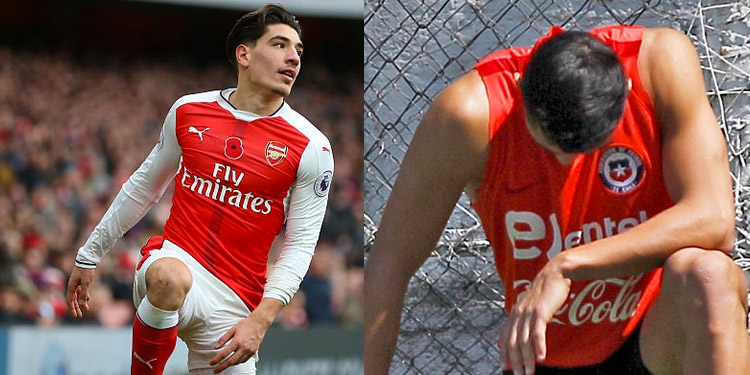 Morning to you, looks like November as we’ve got a double injury crisis on our hands, involving two very important first team players.

We’ve known for a couple of days that Alexis Sanchez has had a muscular problem but the exact nature of it has been unclear. Chile have played down the problem as minor, and suggested it was a calf issue, but Arsene Wenger said:

Now, we know Chile need Alexis, and we know Alexis will run through walls to play football, but the manager sounded more than a little concerned about the prospect of him being patched up and put out to play against Uruguay next week:

We have to get access for our medical staff to the MRI scan to see what grade it is, how bad it is and make absolutely sure they don’t make any suicidal decision that could harm his future for two or three months.

That is absolutely important. It’s a grey area between the national team and the club team and of course they look at their own results which I can understand but we have to preserve the health of Alexis Sanchez.

He always wants to play and that’s where it is a more sensitive case because he’s always ready to play even when injured.

What he’s saying, and how he’s saying it, suggests there’s potentially something serious going on here. If the injury goes beyond minor then it’s incumbent on Alexis to be up front and honest about that. If there’s the possibility he could do himself damage that keeps him out for months he has a duty not to play.

I know players play through some kind of pain or niggle every week, but if he’s risking serious injury then that’s a very different thing. Let’s hope it’s not as bad as it sounds, because even as it stands his participation in next week’s trip to Old Trafford must be in some doubt.

That worry was then compounded by a report which says Hector Bellerin has suffered ankle ligament damage and could be out for some weeks. The news comes from the same journalist who broke the Lucas Perez news so it’s a decent source, and obviously a significant blow to this team. Bellerin has become so important at right back, not just for his defensive interventions but also what he gives us in attack.

We obviously have replacements in Carl Jenkinson and, possibly, Mathieu Debuchy but such is the impact and quality of the young Spaniard that they’re very far from like for like. It looks as if the injury was picked up on international duty with Spain U21s, so whether it was a kick or a twist or whatever, we don’t really know yet.

Also, I don’t like the sound of ankle ligament damage at all, and while the initial prognosis is for just a couple of weeks, I’d strap in and prepare for more. If it is just a short period, then phew, but let’s see what happens. In the meantime, November can go stick one up it’s hoop.

For some bonus reading this morning, Tim Stillman’s latest column touches on Arsene’s love of a leftie in the centre.

Time now for this week’s Arsecast, and although we don’t normally do a show during the Interlull, we’ve got one for you today. After some waffle ‘inspired’ by this week, I meet Stephen Bradley, a former footballer and currently Arsenal’s chief scout in Ireland. He was a huge prospect when he arrived at the club as a 15 year old, but for various reasons he never made the jump to the first team. We discuss that, a football career that ended at 27, his move into coaching and managing, another Irish lad who almost made it at Arsenal, what he looks for in young players, if there are any young Irish prospects we should be keeping an eye on and lots more.

Right, that’s that. Any updates on the injury situation will be found over on Arseblog News. Enjoy the podcast, catch you tomorrow for some weekend waffle.