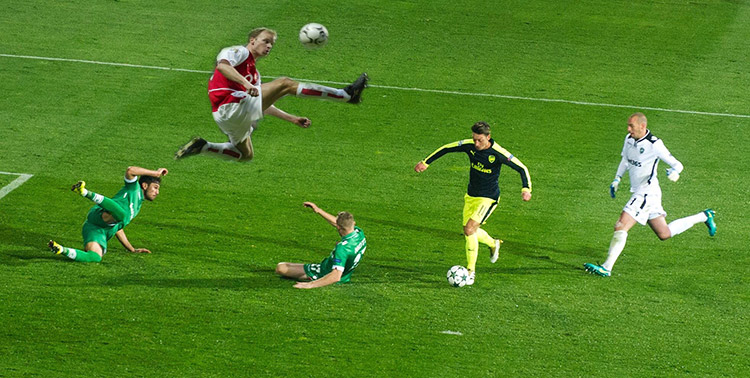 After such a fantastic start to the season, and with a goal that seemed to sum up everything about him against Ludogorets on Tuesday night, comparisons have been made throughout this week between Mesut Ozil and Dennis Bergkamp.

Adrian Clarke says he’d find a way to have him Arsene Wenger’s greatest XI, and goes on to say:

We’re all guilty of getting a bit over-nostalgic when reminiscing over players from yesteryear, but if you cut out the selective memories, Ozil’s touch, vision, brainpower, pass execution and overall influence is genuinely at the same level as Dennis Bergkamp’s.

Now, I suppose the obvious thing to say here is that what sets Bergkamp apart is that he was part of teams that achieved fantastic things. He won the double, he was part of the Invincibles, and success goes a long way to moulding our perception of a player. Ozil hasn’t yet won the league with Arsenal, although he does have two FA Cups under his belt.

Perhaps the one caveat to this is that Bergkamp played in an era when there were only two teams who were going to win the league – it was either us, or Manchester United. That white hot rivalry between the two clubs, fueled by animus and grudging admiration, was the only game in town. Nowadays, it’s a far more competitive environment and there are more teams capable of going to distance from August to May.

Just to be clear: that’s to take nothing away from what Bergkamp’s contribution was to those achievements, merely to put them in context when we’re comparing the two players. There’s also the idea that comparisons like this are ultimately redundant, we’re talking about two different players in very different circumstances, but we’re football fans – we’re almost preconditioned to take one thing and hold it up against the other.

Arsene Wenger was asked about it yesterday, and spoke at length about the improvement we’ve seen in the German this season. Amy Lawrence has written about it in today’s Guardian. Firstly, his goalscoring, saying:

I convinced him that he has it in his locker to score goals. He was more focused on giving and looking. Today he understands he can have those qualities but as well be on the end of things. The timing of his runs is good. In training I noticed he is a very good finisher. When you have that in your locker you have to try to get it out.

Slowly, he now realises that. Now he makes more runs to score goals. On top of that he has a fantastic attribute of a guy who is a good finisher – he is calm. You notice all the finishers are killers. That means they keep their nerve in front of goal and he has that.

But then direct comparisons with Dennis and whether or not he could go down as a legend like the Dutchman:

He can be a legend if he commits. Dennis Bergkamp committed for a long period, he played until he was 38. I wish we have 10 more years of Özil. To become a legend at the club you need to stay for a long time. If you stay two years you would not be a legend.

Which I think is a fair point. Longevity plays a part, no doubt about it. And while we might look back with rose-tinted glasses, it wasn’t as if Bergkamp was playing at his 100% level every single week. There was a fairly fallow period in his career when he was less productive and influential. The trauma of that Villa Park (thanks Tony D!) penalty miss seemed to do him some damage, but in the end he proved the old adage about form being temporary, and class being permanent.

Ozil has had unconvincing spells, I don’t think there’s any doubt about that. The price-tag and the expectation were something of a burden, I think. His treatment by certain sections of the press has been ridiculously harsh, an easy target for those who portrayed him as weak, a fey foreigner unable to cut it in the rough and tumble world of the ENGLISH Premier League.

But even those who could always see his quality – and you’d have to be blind or deliberately stupid not to – knew he was capable of more. And to me that’s where he and Bergkamp are most alike. Sure, they’re number 10s (even if Bergkamp was much more of a striker than Ozil), they have the ability to see the game differently, to create, to find passes that nobody else can but, for me at least, their quality is such that I always feel like they have the potential to do more. So even when they’re brilliant there’s a background hum of something – not disappointment, but a desire for them to reach these heights that few others are able to do because they don’t possess the football genius that these two men have.

There’s no doubt that there’s something different about Ozil this season though. It’s not simply that a new attacking system has made him more productive in front of goal. You can see there’s a strength to him that wasn’t always there. In the build up to our fourth goal at Sunderland last weekend, he took the ball from deep in our half, and burst down the right hand side. He was tracked by the Sunderland defender all the way, and perhaps in previous seasons he might have been bundled off the ball. Not this time, he stood tall, bounced the defender onto his arse, and played it inside where the move for the goal continued.

A small thing, perhaps, but a telling one. It’s something I mentioned when I spoke to Second Captains on their football show this week (starts about 38′). That this is a Mesut Ozil who now feels like he really belongs at Arsenal. When you’re at the biggest club in the world, as he was, and you’re considered expendable it must create some doubt – even if you then become a marquee record signing for another big European club. But let’s take our Arsenal glasses off for a bit, and admit that as big as we might be, or think we are, we don’t come close to Madrid in terms of prestige and reputation.

A new country, a new club, a new style of football that offers you less protection, some injury issues, and all the chaotic ARSENAL related stuff that has gone on around it in the last few years. It’s a lot, but a lot with two FA Cups to show for it in fairness. Now though, I think we’re seeing a Mesut Ozil that is in his prime years, brimming with confidence, with players around him who are on his wavelength who can bring out the best in him, and to whom he can deliver the things they need.

He’s similar to Dennis Bergkamp, that’s clear, but individual comparisons only scratch the surface. What he can be though, is the Bergkamp of this generation in terms of what he can bring to this team, the influence he can have, and the contribution he can make to a side that looks like it can mount a serious title challenge.

That’s his challenge now, to continue this improvement – from very, very good to absolutely brilliant – because if he does our chances of winning things this season will be significantly better.

Right, feel free to discuss this in the arses, and for more Ozil reading check out Tim’s column this week. There’s also this week’s Arsecast to keep you entertained this morning, with discussion of Mesut’s midweek madness in front of goal, the North London derby, another extract from Alex Hleb’s book, and more.

More from me tomorrow as we preview the North London derby. Have a good Saturday.