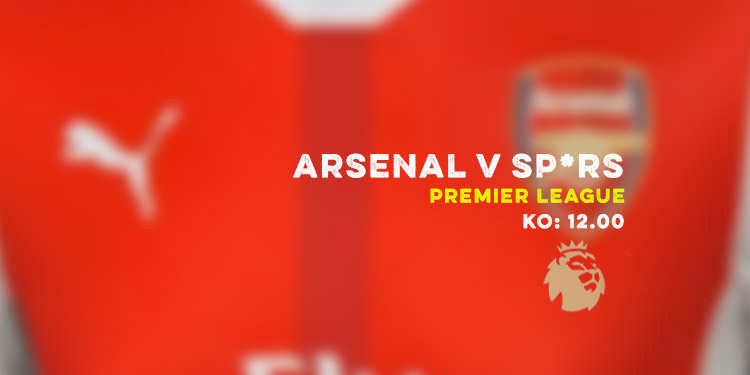 It’s always hard to know what to write about this game. The only thing that’s going around in my head is ‘Just win. I don’t care how, just win.’

A sumptuous evisceration followed by a cannibalisation of them, in football terms of course (not Hannibalesque), would be marvellous. But so too would a spawny late winner deflected in off the arse of a hapless, distraught defender. Hopefully Kyle Walker, he just has that kind of face.

It’s one of those games where they say form goes out the window, but I think that’s only really relevant when there’s a marked gap in form between the two sides. That’s not really the case today. We’re unbeaten since the opening day of the season, they have yet to lose a game. We’ve been winning more though, and they’ve gone six games without a win (four draws, two defeats). Will that matter today? Perhaps. Maybe. I don’t know. Who knows? Nobody.

That’s the thing about this one. It’s impossible to predict. Even the best Arsenal teams you ever saw faced up against people like Justin Edinburgh and Helder Postiga and still found it tough going. I suppose the only thing we can really try and predict is our team. The manager does have some decisions to make, some based on fitness, some on who he thinks best for today’s job.

If Theo Walcott is fit he’s back in on the right. Alexis should start up front, as he has done for most of this season, relegating Olivier Giroud to the bench – from where he can be a valuable asset should we need him later in the game. Although he hasn’t exactly been at his best in recent weeks, I’d still pick Alex Iwobi on the left as he can really add something to the way we attack. Hector Bellerin and Nacho Monreal are back in at full-back, and after that it’s who he chooses to play in the centre of midfield.

I’m assuming that Santi Cazorla won’t make it, so it’s going to be two from Francis Coquelin, Mohamed Elneny, Aaron Ramsey, and Granit Xhaka. I’d be surprised if Ramsey started, a game of this intensity is probably a little early for him considering he’s just back from a lengthy injury lay-off. I know he’s one of those super-fit guys and all, but just in terms of match fitness it might be a little too soon for him.

I’d like to see Xhaka in there, but I’m not quite sure if the manager trusts him completely yet. Picking him today would be an indication that he does, but my suspicion is that he’s going to look at Coquelin and Elneny as a duo that are pretty secure defensively and on the ball, albeit one that lacks a little bit of the craft that the others can provide. I guess we’ll see, but with that front four he might feel a little caution is required further behind.

As we showed against Ludogorets the other night, and in previous games, we’re a bit more open than we should be at the back. Perhaps some of that is due to the fact you’re not necessarily as defensively-minded against that kind of opposition. When you’re playing against tougher opponents, there might well be more focus, as we showed when we played Chelsea back in September. We’d be well advised not to present them with the same kind of chances, and the fact they don’t concede many goals plays a part in that.

That said, if we can get the attacking side of our game to click we can cause them problems. If you watched them the other night in the Champions League, you’d have seen enough in there to be encouraged about how their defence isn’t quite all it’s cracked up to be, and with Walcott, Ozil and Alexis all in good goalscoring form, we have players who can punish them if they play like that again.

It’s a game that they [the fans] want to see us win at all costs. They’re a massive rival. My team-mates and I will leave everything on the pitch.

We are in a strong position in the league and we want to strengthen this position. It’s a derby and before a derby you need to prepare mentally as well to be at your best, to fight no matter what happens and as well to be effective. That means mastering every situation we face on the day. You prepare mentally for that.

But, when it comes right down to it, just win. I don’t know what else to say about it. We’ll have live blog coverage of it for you, starting with team news about an hour from kick off. For more check back later with a post that has details of that and how you can sign up to join the live blog community, or bookmark our default live blog page and updates will begin automatically.

Time for some breakfast. Catch you later for the game.

How will arch-pragmatist Emery approach the Carabao Cup derby?