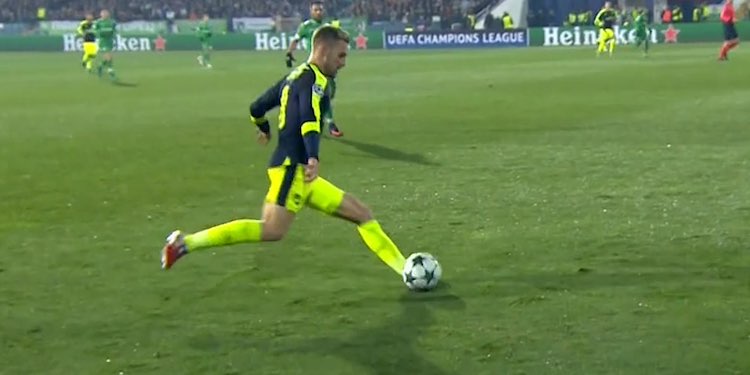 I had a busy day yesterday but got home in time to watch the last 30 minutes of Sp*rs v Bayer Leverkusen in the Champions League last night. I’m not going to say much about it, other than I hope they play like that on Sunday. Or worse, obviously, but at best just like that.

Still, at least they had another record ‘home’ attendance in the ground that isn’t actually their home at all. And apparently it’s also the highest England club home attendance in the Champions League but, you know, there’s the small matter of it not being their home. Their home being White Hart Lane. Not to mention their insistence that it’s the highest English club home attendance ever, but once more I feel compelled to point out that it’s not their home at all. It’s Wembley. Home of the FA, a terrible pitch, and dreadful transport links.

Still, when they have their 60,001 stadium they can on bang about ‘record’ attendances all they like, as if anyone actually gives a single shit about things like that. It’s also a nice number because when you remove the 000s it’s 61 which, as we know, is a landmark year their fans. Well, their fans dads and uncles and granddads and that.

So, between now and Sunday there’s going to be plenty of build-up and coverage. It is the most important North London derby ever. Until the next one. One man who fancies taking part is Aaron Ramsey, who says:

I’m ready to face Tottenham. I wouldn’t have been out there starting last night if I wasn’t ready. It was great for me. I’ve been out injured for a couple of months now and it was nice to be back starting again and getting 70-odd minutes. That will put me in good shape going into the weekend and hopefully I can stay fit.

As ever his performance sparked plenty of debate, and my feeling on it is a) he’s nowhere near match-fit and b) he’s being played out of position (even if it’s a position in which he has done an effective job in the past). I also think playing him there on Tuesday was more to do with giving him minutes and getting him sharp than introducing him as another competitor for Theo Walcott and Alex Oxlade-Chamberlain to contend with.

He’s been on record more than once saying he wants to play as a central midfielder, and I think that’s where the manager prefers him too. The issue is that right now it’s a very crowded place with Francis Coquelin, Mohamed Elneny, Santi Cazorla and Granit Xhaka in there – all of whom have performed consistently well to varying degrees. There’s always the possibility of playing him further forward, where he’s done so well for Wales, but when Mesut Ozil is performing the way he is right now that’s not gonna happen.

It’s also interesting that the German has somewhat taken Ramsey’s mantle as the midfielder most likely to get you a goal. He’s gone from from key-creator to, I don’t know, a false 10 or something, where he’s the one bursting into the box or behind the defence as space is created by the runners. If you had to say what it was that set Ramsey apart from the others, it was his goal threat, so, it leaves him with something to do to get back into the team, and that’s not a bad thing to my mind.

I have wondered before if the signing of Xhaka was made with Ramsey in mind, that Wenger sees them as the midfield duo of the future, but with the others performing the way they have been, it’s up to the Welsh international to force his way into the reckoning. It’s a truly competitive environment, so hopefully we’ll see the fruits of that as the players battle for a place in the side. From game to game it’s difficult to know which midfielders are going to start, but I suspect as the season goes on Arsene Wenger will try and mould a de facto first choice partnership.

As for Sunday, I don’t think he’s quite ready to start a game of that intensity anyway. I think and Olivier Giroud will have to content themselves with a place on the bench as the manager goes back to the system and personnel (fitness permitting) that have played so well for the most part this season. When you look at their impact over the last two games though, with three goals for Giroud and two assists for Ramsey, they’re very nice options to have in reserve should we need them.

On the fitness thing, early reports suggest that Walcott, Hector Bellerin, Nacho Monreal and Santi Cazorla are expected to be back in contention – and I’d definitely start the first three if they were fit. Quite how the manager will decide to set up his midfield against an energetic, kicky Sp*rs side will probably give him some pause for thought, but he’s got the nice job of deciding which excellent option to go for rather than having to make do with someone who he’d rather not have to call on. More on that over the next couple of days, I’m sure.

By the time Sunday comes, we’re all gonna be up to *here* with it. We’ll be just thinking ‘Can you just get on with it? For goodness sake, just play the football and let Mesut tear them a new one.’

Right, not much else going on this morning. Tim Stillman will be here with his column later on, I’ll be back tomorrow with an Arsecast and all the rest. Until then, have a good one.