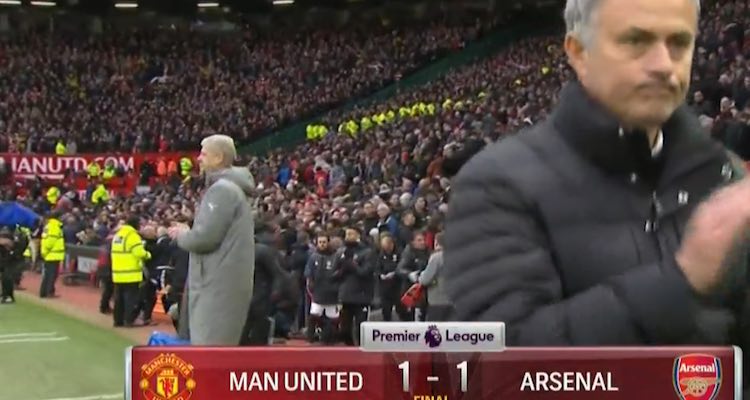 What’s worse? Playing quite well, commanding a game for the part, and then letting in a late equaliser? Or, playing like crap and nicking a point at the end with a last-gasp header?

I think I know what feels worse. Certainly Manchester United fans and their manager will have had a much glummer time after Saturday’s game than we did. It’s a position we’ve been in plenty of times. The late goal – when you score it to get something from a game – is up there with the best things ever. When you concede it, it’s crushing and fills your heart with a heady mix of fury and despair – fupair, if you will.

You ask questions like: Why are we such bottling twats? Why can’t we see a game out? Why don’t we have the professionalism to keep the lead? Why, when we were so dominant, did we all of a sudden turn massively defensive allowing them back into it?

You question the manager’s substitutions. Putting on that defensive midfielder for the man who scored the goal and was probably the best player on the day was an invitation for the opposition to have a go, and look what happened. In short, it is thoroughly unpleasant and best avoided. You dominate but don’t get what you feel is your just reward.

On the other hand though, if you’re the team that has performed the snatch and grab, you’re more inclined to look at things from a positive point of view even though 99% of the game has been difficult and the performance was one which left much to be desired. You might be more inclined to rationalise it by saying ‘Well, that’s always a difficult ground to go to, especially with an early Saturday morning kick-off just after an Interlull when we’ve just had one training session, and while the manager did get his team selection wrong, we showed enough balls to keep going and get that goal’.

You also might not, but those things are not excuses, but facts. We do have a terrible record there. It was an early kick-off. There was a big long Interlull. And we played poorly and came away with a point. Which is to say, while there’s a lot to think about, I would much prefer to play poorly and nick a late goal than play quite well and end up with nothing. You give yourself a better platform to correct the problems with the former, in my opinion.

I said November was going to be a month when more serious questions were asked of us. Sp*rs and Man United were always going to be more challenging than some of our previous fixtures, and we’ve come through both games unbeaten. We haven’t lost since the opening day. Those are the clear positives. The negatives come from the performances themselves.

I think everyone would accept that it’s more difficult to play scintillating attacking football against the best teams in the league. Some of that comes down to the way the team has been set-up, the selection against United designed to give us experience and physical solidity, came at the expense of craft and creativity.

But it also feels like there’s still something of a psychological hurdle to overcome. The strangely passive nature of the North London derby, and the weight of Old Trafford were, if not quite worrying, indications that the team might still need to be convinced of its own potential. I don’t think there’s too much wrong with the playing squad (injuries aside), the talent and quality is there for the most part.

It’s why I think Giroud’s goal is hugely important, not simply for the reason it won us a point and caused Jose Mourinho’s weekend to be measurably worse than it might have been. It maintained the unbeaten run we’ve been on, and if the team have the belief they can take something from games when the play poorly, then that’s a good thing. They’ll know as well as anyone that they can play better than that.

It was an unlikely but obdurate point against United, and there is mounting – if not yet inconclusive – evidence that there’s a bit more steel to the side this season. Is the maturity that Arsene Wenger spoke about a number of times since August part of the reason why we’re scoring so many important late goals? Is it why, close and all as it was, we hung onto the lead against Swansea at home and didn’t make a bollix of it the way we have against them in seasons past?

I hope so. Questions remain, more will be asked of us on Wednesday night and I hope we find the answers. It feels like we need something to get us going again, something relatively convincing against PSG would do that, but as I said yesterday, there’s an onus on the manager to find a midfield combination that works. Perhaps a little less caution is the answer, but we’ll find out in due course.

In other news, Santi Cazorla has been sent to Spain to consult with famous doctor Ramon Cugat. He’s one of Pep Guardiola’s favourites, and the Spanish international appears to be no closer to a comeback due to the Achilles problem he’s been suffering from. I wonder if it will make the manager think a bit more closely about a longer-term solution to the midfield.

As important as Cazorla is, and has been, his ongoing fitness issues mean we have to think about how to function without him. Fingers crossed he’s back sooner, but it doesn’t necessarily sound that positive.

Right, for more considered waffle and discussion about the weekend and all the rest, James and I will be here with an Arsecast Extra for you later on. We’re recording around 11am, so if you have questions/topics for discussion, please send them to us on Twitter @gunnerblog and @arseblog with the hashtag #arsecastextra.

We’ll have the podcast for you around lunchtime, until then.