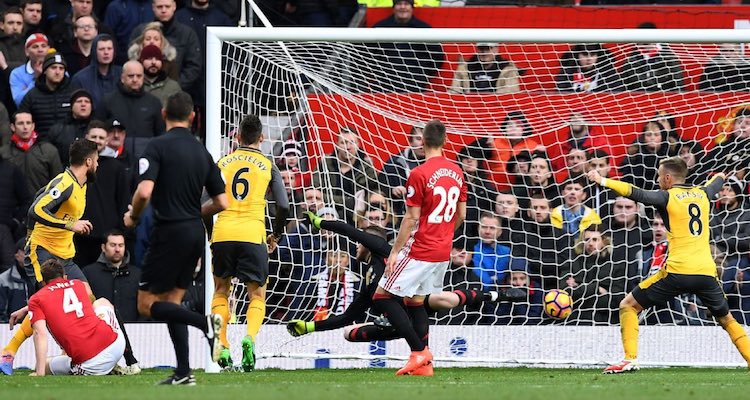 The title of yesterday’s post hoped that we’d do ourselves justice at Old Trafford, and although we came away with a point – one that must have felt like a dagger in the heart to Jose Mourinho – it’s one that even those with the most rose-tinted glasses on would find hard to say we fully deserved.

In short, our performance left an awful lot to be desired. The first half wasn’t so bad, and in fact we should have been ahead early on when Theo Walcott flicked on a cross to Alexis, but 6 yards out he completely mistimed his header and the chance went begging.

Our set up, with Coquelin and Elneny in the middle and Aaron Ramsey on the left was to ensure midfield security and physicality, but it left us more or less toothless. The two central players were both quite tidy on the ball with pass completion stats of 88% and 93% respectively, but they’re both fairly conservative. We didn’t have anybody with the requisite craft to find a way through United.

Ramsey on the left is even less functional than Ramsey on the right, and I don’t think the manager is doing the team or the player any favours by playing him out of position. If you’re going to play the Welshman, play him as a central midfielder. If you don’t think you can do that, then perhaps it might be best to consider other options. He clearly wants him in his team, but isn’t prepared to play him where he wants to play and where he is best.

Central midfield is still an area of the team where he doesn’t seem sure what his best combination is. The only one we haven’t seen at all is Xhaka and Ramsey, but is he prepared to give that a chance? So, while I understand the need for defensive security away from home, I don’t think we can use Coqeneny and expect the team to play with the fluidity and forward thinking style we’d like.

Defensively we were all right, Koscielny and Mustafi did fine. Carl Jenkinson looked terrified at times but still managed to defend stoutly at times, while Nacho Monreal switched off – as did Theo Walcott – in the build-up to their goal. There was little to enjoy from that second half from an Arsenal point of view, it looked like we were trying to hang on to a clean sheet in the vague hopes of nicking a goal, or not, but Mata’s strike meant we had to try something.

Giroud came on for Elneny, Xhaka for Coquelin, and then Oxlade-Chamberlain at right-back for Jenkinson. Credit where it’s due, because two of the substitutes combined to get us the goal. The run down the right from the Ox was excellent, as was the cross, and Giroud’s header was one of those hugely enjoyable thumpers. He didn’t seem to celebrate too much though. Whether he felt it would be inappropriate because Arsenal played so poorly, or he was frustrated at being left out is open to question, although the manager’s post-match comments suggest it was the latter.

Either way, it was a great goal, his 4th of the season and three of them have come from off the bench. And not for the first time this season we scored very late in the game, and if there’s something to take from yesterday it’s that. We don’t know yet if this is just a case of us getting away with again, or a genuine ability to keep going right until the end, but after Southampton at home, Burnley away and now Old Trafford, there is, perhaps, a pattern emerging.

A team that, even when it doesn’t play particularly well, will score late goals and earn points. I think Walcott said afterwards that this was a game we’d have lost in seasons gone by, and you won’t find too many arguments from me about that.

However, if that’s our positive then we have to talk about why it is this ground is such a difficult place for us to go. I think the manager got his team selection wrong, it was conservative, almost afraid, and it felt like that fear was transmitted to the players. As I said yesterday, I wasn’t paying much attention to their line-up, but on paper that was a back four that we should have been able to cause more problems than we did.

Often the first half of games like this can be cagey affairs, both teams testing each other out, and you get more in the second period. We had Petr Cech to thank in the first for some fine saves, but there was just nothing in the second 45 minutes to provide any encouragement. Mesut Ozil, fresh from two weeks off, couldn’t get a grip on the game, and while the selection of Alexis was understandable, there was little to suggest he was anywhere near properly fit. The bandages on his hamstring do quite the opposite in fact.

The fear of losing the game meant that changes we would ordinarily have made to try and adjust the team’s rhythm were only made when we went behind. We went there yesterday not to lose, and look, we didn’t, and I get that we’re a bit battle scarred by Old Trafford, but you can’t look at the performance itself as anything other than a bit worrying.

The result I’d have taken before kick-off, and when you score that late having played that badly, there’s something to enjoy but it’s clear the manager has some serious thinking to do about his team. Not just ahead of Wednesday night’s Champions League game, but going forward. He has to make that midfield work properly, because without that the team cannot attack and score goals the way we want it to.

As you would expect, the manager sought the positives post-game, saying:

There’s a remarkable resilience in the squad and that’s why we came back to 1-1. We didn’t have the usual fluency in our game. Was that because Manchester United blocked us well? I think it was because we were also not at our best going forward.

But perhaps a hint that there was something of a psychological block:

Maybe it’s the mental block here because for a while it didn’t go well for us. Was it a bit of fatigue after the international break? I don’t know.

Overall, considering the circumstances, the way we played, how little we threatened from an attacking point of view, and the lateness of the equaliser, you have to be pretty content with a point. We remain unbeaten since the opening day and I think preserving that record is both positive and important, but there’s definitely work to be done, and we’ll have be better when we face PSG on Wednesday night.

For now though, have a good Sunday. James and I will be here tomorrow to discuss the game in more detail on the Arsecast Extra. Until then, I leave you with this lovely moment, Marcus Rashford’s face when Alexis pulled off that lovely turn in the first half. Glorious.

Man Utd 1-1 Arsenal: A rare point at Old Trafford, and yet …