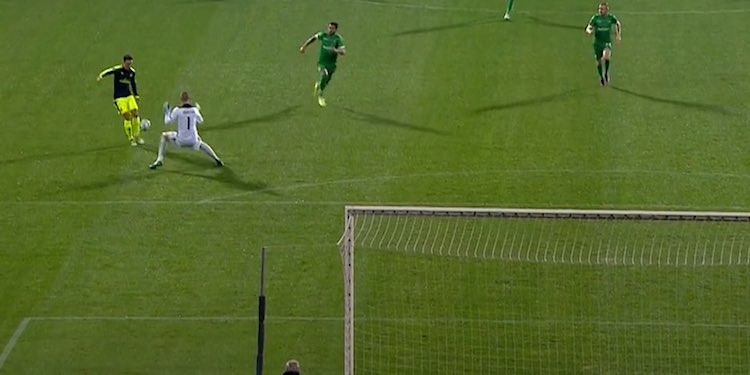 Sometimes a game is won on the basis of a good performance. Sometimes you get a bit of luck. Sometimes you grind it out. And sometimes somebody does something extraordinary and special, and last night Mesut Ozil did exactly that.

Having been flagged offside just minutes before, much to his obvious frustration, he timed his run perfectly when Mohamed Elneny played him behind the Ludogorets defence (and credit to Olivier Giroud for racing back that late in the game to nick the ball). Ozil saw the keeper coming, lifted it over him, cut back inside, saw two defenders, slowed down time with his mind, cut inside them – sending one of them flying into another dimension where he’s wandering around looking for Barb, dummied the other, took another touch and with the keeper desperately flailing after him, rolled the ball into the net to win the game.

By any standards it was a magnificent piece of football. Get the highest resolution TV you can find, play that goal on a continuous loop, and hang it in a gallery somewhere, because it was like a piece of art. I mean, look at it.

Then look at it again. Just superb. And that it capped a comeback from 2-0 down made it all the sweeter. It doesn’t seem like we do that very often (the going 2-0 down is a thing to avoid as much as possible, to be fair), and the importance of the goal – given that PSG scored a late winner themselves – goes without saying.

It had begun badly for us though. A harsh free kick awarded against us saw the home side take the lead. The defending was unconvincing when the ball was played in, and their lad guided it home. The defending for the second wasn’t so much unconvincing as downright terrible. Gibbs got roasted by the winger; again Koscielny and Mustafi showed if they have a weakness as a duo it’s close to goal as both could have done more to stop the ball in/mark the bloke who scored; and Ludogorets showed exactly why they caused us problems at the Emirates. This time they punished us.

As much as you can be critical for that, you do have to admit there’s a certain mettle about this Arsenal side this season, and when Granit Xhaka pulled one back from an Ozil cross a few minutes later we were back in it. A quite delicious Ramsey cross from the right – ironically about the only time he was ever over there – provided Giroud with the chance to nod us level not long before half-time, and that was a fine response to what was a pretty poor start to the game.

The second half saw our defensive issues raise their head again, a couple of times Ospina was called into action to keep the scores level, and they always looked threatening on the break. They had so much pace that when we tried to put pressure on they were always looking to nick the ball and storm up the other end. Many of our corners ended up being their most dangerous moments.

With the team’s balance shifted to accommodate Ramsey and Giroud (more on that anon), it felt as if we couldn’t make it click. That was, of course, until Giroud nicked it and Elneny sent Ozil through to do his sweet, sweet magic late on. Afterwards, Arsene Wenger said:

We were surprised by the speed of their start. We were caught cold. After that we kept our composure and came back to 2-2 in the first half, which was quite positive. Second half we dropped a little bit physically and were less fluent than in the first. We tried still to have a go and finally we got the goal close to the end.

Overall, I thought it showed the good and bad of us to various extents. I’ve written before about how we’ve been riding our luck defensively, and we saw what happens last night when the opposition take their chances. It’s something we really do have to address, especially when the fixtures over the next few weeks become tougher and the quality of the opposition increases. We’re just a little too porous back there, even if we’ve been keeping plenty of clean sheets, so some focus on that would be no bad thing.

On the other side of the coin though, what people have liked about us a lot this season is the way we’ve attacked. The fluidity of our movement and so on. We didn’t see very much of that last night. When you play Giroud up front, move Alexis out wide and play Ramsey ostensibly from the right it fundamentally changes the way we play. No doubt the Welshman has licence to move into the middle to try and make things happen, but it leaves us very narrow and, when he’s not at his sharpest, it can slow things down.

That said, I think their selections were designed to give them playing time and I’d be surprised if they were in from the start on Sunday (depending on injuries elsewhere). The manager does have to rotate his squad and a game like last night’s was one that gave him the opportunity to do that. In the end, thanks to Ozil’s piece of brilliance, we just about got away with it, but I understood the why he picked the team he did. It was made with one eye on the North London derby on Sunday and ultimately the team he picked showed the character required to win a game we had to win.

It definitely raises some questions, but we can’t play the same XI every game and expect them to be fresh for the big ones like Sp*rs at the weekend. So, credit to them for making the comeback, and maybe next time we set up with this system there will be a few tweaks to help it function more effectively.

Right, I’m off to watch the Ozil goal for about an hour. We’ll have all the reaction and news throughout the day over on Arseblog News. More here tomorrow. Until then, have a good one.