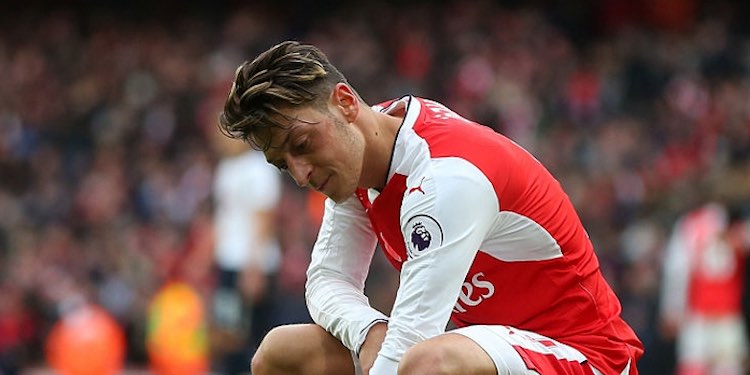 It’s hard to know exactly where to start with this one, because even in the cold light of day, there’s something weird about the way we played yesterday. Some suggested the midweek Champions League tie left us a little leggy, but that was a game on Tuesday, and there was plenty of recovery time between the two games.

It felt more like a psychological thing than a physical one. Both teams seemed inhibited by the idea of losing the game, and I think we were affected much more than they were. Away from home, set up to frustrate us, there was no pressure on them to go and win, whereas for the Arsenal players there had been talk of leaving it all on the pitch and replicating what we did against Chelsea.

The team was pretty much as expected, Xhaka got the nod alongside Coquelin in midfield, but the air of nervousness about us was evident in the first few minutes when Son threw an obvious dummy, Mustafi bought it and got left behind. Thankfully the South Korean couldn’t find the final ball. Kane then flicked a header just wide from an Eriksen cross.

We were stand-offish, second to almost everything, and it looked as if the occasion was too much for some. To have a North London derby so flat felt really odd. Maybe it was the kick-off time, a midday is naturally going to suck some of the atmosphere out if it, but as the first period went on we grew into the game. Walcott hit the post with vicious shot from outside the box, and when we did click as an attacking unit, the chance we created for Alex Iwobi was wasted – the youngster’s shot lacked conviction.

I feel like if that had gone in, it might have energised the team a little more than the own goal scored by that bloke who looks like a car park attendant called into the team at the last minute. His header into the bottom corner was enough to give us a lead to take into the break, and from there we should have seen Arsenal kick on.

Instead Sp*rs began the second period in lively fashion. Bellerin had to bail out Koscielny with one of his brilliant full-sprint tackles when the Frenchman had been nutmegged on the edge of the box, but a couple of minutes later the Arsenal captain conceded a penalty, carelessly tripping Dembele in the box. Kane stepped up and equalised.

Minutes after that Cech had to make a good save to deny Eriksen, and but for an outstanding block at the back post by Nacho Monreal, Kane would have added a second. They looked more likely to score than we did. At the other end Xhaka just failed to get his head to a fine Iwobi cross. Arsene Wenger’s substitutions were an indicator of his intentions. Throwing on Ramsey first, then Giroud and Oxlade-Chamberlain, showed he really, really wanted to win the game.

What he needed was for his substitutes to make a real impact and change the dynamic of the game. Ramsey had a chance which you’d fancy him from normally, but looped his shot over the bar. He tried again from distance later and shanked it wide. As for what Oxlade-Chamberlain provided, the less said the better. There’s no doubt he’s improved this season, but quite what he thought he was doing yesterday is beyond me. His teammates seemed as frustrated as the crowd, and it looked as if he lost his mind a little bit out there, it was very strange.

Bellerin had a sight of goal but saw his shot blocked, a curling Eriksen free kick bounced through our area and off the post – and had that gone in I’m sure it would have been the winner – and late on Giroud headed straight at the keeper. That was that. The end of an underwhelming and frustrating game. Afterwards, Arsene Wenger said:

We couldn’t find the creativity, the fluency around the box nor the vision we are used to. Overall I felt that when we were questioned in the final 30 minutes, we had no physical answer good enough to win the game. But we tried. I cannot question the spirit and the intensity of the game, but we lacked, we looked a bit flat.

We definitely looked flat, listless even at times. There was a moment around the 80′ mark when a Sp*rs centre-half had the ball, he just stood there for a while as our players stood off, and eventually Giroud decided to run at him a little. The thing that sticks out for me about the first half is Alexis constantly gesturing to Iwobi to get closer, to help him press them higher up the pitch, but it never seemed to fully sink in.

Collectively we weren’t anywhere near our best, and individually nobody could find the spark. I thought a crunching Coquelin tackle in the first half might be the thing to get the team going, but no. The front four were far from the fluid attacking machine we’ve enjoyed at times this season. Bar his shot off the post, Walcott struggled although I did enjoy his set-to with Vertonghen and the fact that Xhaka and Ozil were straight over to back him up. But making just 8 passes summed up his involvement.

Alexis had no significant impact, Iwobi looks like a young man who could do with a week or two out of the firing line, and while Ozil was much more involved, he couldn’t get a grip of the game in the way we’d hoped he might in the build up. We were defensively suspect too, and once more rode our luck a little as we have been doing recently.

All in all, a disappointing afternoon, because hopes had been so high. That we couldn’t ever get ourselves going fully for a North London derby is very strange. Was it the chance to go top that put some crippling pressure on? It wouldn’t be the first time. And when you take into account this was a Sp*rs side far from their best themselves, it feels like a really opportunity missed.

And yet, as a fixture this is a game that you often have to take in isolation, one in which form – good or bad – rarely plays a significant part in the day’s proceedings. Still, it’s hard to escape the feeling that this is anything other than two points dropped.

On the plus side, the unbeaten run continues, and that’s probably where Arsene Wenger’s focus will be. He’ll know his team missed a chance yesterday, but will try and keep confidence high by reminding them we haven’t lost a game since August. With an Interlull now upon us, and the small matter of Manchester United at Old Trafford when we come back, he’s got to keep their heads-up, even if yesterday’s performance was one which left too many of them bowed.

For more on the game, James and I will be here with an Arsecast Extra for you later on. We’ll have that available to download before lunch. If you have any questions, please send them to @gunnerblog and @arseblog on Twitter, using the hashtag #arsecastextra. Until then.