Olivier Giroud came off the bench to score two goals to help Arsenal to a 4-1 win over Sunderland. Earlier, Alexis Sanchez opened the scoring and though Jermaine Defoe equalised not long before Giroud was introduced to the action, Arsenal were to complete, what was on the whole, a comfortable victory.

Not that David Moyes was in agreement. He said that, “It wasn’t a difficult afternoon [for Sunderland] until the last 15 or 20 minutes. I didn’t think we collapsed – we did enough not to be beaten by that amount of goals. We’d grown into the game.”

The problem for Sunderland was that their forward forays were meek, and every time the crowd urged them to increase their intensity, they couldn’t match them. Still, they came back into the game when Duncan Watmore was felled in the area by Petr Cech and Jermaine Defoe converted the penalty. However, the jubilation of the equaliser was short-lived because Giroud came off the bench to take the game away from them.

Arsenal take the lead and their foot off the pedal

Goals change games, that’s obvious because it forces teams to alter their approach, whether to come on more if they’re losing, or drop off if they’re leading. However, the pattern of the game was yet to be established when Alexis opened the scoring. It just so happened Arsenal scored with their first prolonged spell of possession, a patient team move that consisted of 22 passes, starting at left-back and ending with Alexis meeting with his head, a cross from Alex Oxlade-Chamberlain.

Till then, Sunderland had probably matched Arsenal and by the half-hour mark, attempted the same amount of passes as them. Still, their approach lacked punch, so with a goal lead, it was easy to conclude Arsenal were comfortable.

Arsene Wenger, before the game, mentioned how he feels that the team has “evolved defensively…that everybody knows what he has to do.” Which is true, and the signs have generally been positive, but at the Stadium of Light, there was a mixed approach, standoffish at times, and representing a primitive form of gegenpressing at other moments. (Indeed, there is a moment, on 29 minutes, when the ball is loose where the trio of Ozil, Coquelin and Elneny combine to win the ball back).

Wenger has worked on the defensive plan, adjusting at various moments at winning the ball back and this usually starts with Alexis at the tip. If they can’t press, then they tend to drop back into a fairly passive block behind the halfway line which relies on certain defensive “stars” to step out and aggressively attack the ball. Usually, it’s Francis Coquelin who is the enforcer but that can also mean Laurent Koscielny and Shkodran Mustafi breaking out of the defensive line. On the other side, when the ball is high, then you’ll often see Coquelin lurking just behind the attack, waiting to pounce if the ball is loose.

Sunderland were probably able to move the ball from side-to-side a little easily in the first-half if we are being hyper-critical. David Moyes’ sides are set up to attack through the flank by creating 3v2s and 2v1s, so that can explain some of that, though Arsenal playing away, and also taking the lead, might have prompted them to sit off a bit more. When Sunderland equalised midway through the second-half, it was the wake-up call that some urgency was required in Arsenal’s play.

Most of Arsenal’s early attacks were funnelled through two players; Alexis Sanchez and Hector Bellerin. Usually, Alexis would drop deep, just off the inside left channel between-the-lines, and that would be the prompt to switch the ball wide to the other side to Hector Bellerin. Frequently early on, Sunderland had trouble coping with this switch. (See image: most of the switches from the centre of the pitch happened in the first half). 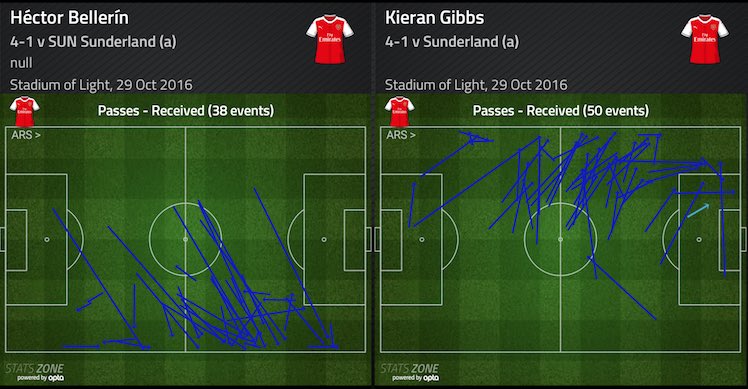 Their winger on the far side, Watmore, would narrow early, possibly looking to stop the easy ball across the defence if Arsenal had the ball at the back, but even when he man-marked him, Bellerin’s pace would take him away from him. The warning signs were there even before the goal, which Bellerin was pivotal in, when Ozil shot straight at the keeper. In the move, it was Alexis from the counter-attack, who found Bellerin with a switch, and once they got up the pitch, were able to create an overload that found Ozil making a third-man run. Actually, this is what Arsenal have done so well this season; using Bellerin’s pace as an outlet after creating an overload on one side. Alexis has been key, usually dropping off towards his favoured side, allowing Ozil and Alex Iwobi to play off him before the switch to the right side. (This is a great video highlighting that ploy).

Theo Walcott also, when he plays, has tended to narrow, and with that numerical advantage between-the-lines, The Gunners have overwhelmed defences in possession, especially ones that don’t press much such as how Sunderland approached the game. Still, Arsenal’s combination game wasn’t exactly perfect and they probably suffered as a result of having one less player supporting the attack. It all clicked though, for the first goal, with the impetus for the move starting when Ozil dropped deep for possession, sensing the need to up the tempo, and then Elneny bursting into the vacated space behind the opposition midfield. The move actually began with a switch by Elneny to Bellerin, and he was at close hand again, as the spare man creating the triangle high up on the right, to lay it off eventually for Oxlade-Chamberlain to cross the ball in.

Later on the attacks were less frequent down the right side, and Kieran Gibbs became more of a factor. He was already growing into the game in first-half more for his calmness in possession, but as Sunderland increasingly decided to mark Bellerin tighter, the space opened up on his side. Gibbs was crucial in all three late goals, crossing for the second, hitting the post with the fourth (which the ball then fell to Alexis) and winning the corner with another low cross for the third.

Adjusted partnership for Elneny and Coquelin

Replacing Santi Cazorla was not going to be simple, especially as his importance to the side is guided by his idiosyncrasies as much as his ability to dictate play. After all, there’s nobody in the side who can match his close dribbling from deep, sometimes which doesn’t require great positioning to receive the ball, but gumption and daring, and his skill. The other part of Cazorla’s partnership with Coquelin is the latter’s movement to create space for him to pick up the ball.

With Elneny in the side, Wenger has somewhat done away with this dynamic, instead forming a more conventional double shield with and without the ball. Still, Elneny was the main ball-winner he had a solid game, completing 91 passes. However, it was his drive from deep which caught the eye, using the moments when Coquelin dropped short to push up into the spaces. As we’ve mentioned, Elneny was important in the build-up to the first goal when he darted into the space vacated by Ozil, and he tried it a couple more times when Arsenal needed to transplant urgency to their play. This suggests a more suitable role alongside Cazorla as his ball winning sufficiently impressed here, using his gangly legs to retrieve ball back quickly at crucial moments, whilst he has the legs to cover lots of ground.

At the same time, however, Wenger trusts the Coquelin-Cazorla partnership mainly on the back of the miles it has carried the team. Coquelin gives him the security, and though his role was adjusted here – he didn’t get into the final third as much to disrupt Sunderland’s lines – he’s probably one of the players Wenger especially trusts to carry out his defensive plans. Against Sunderland, he played slightly ahead of Elneny and behind the attack, following where the ball moves and waiting to pounce. Elneny further back, was the sweeper in the partnership.

“Let’s not create problems that we don’t have at the moment,” was Wenger’s comments after the game on the Alexis-Giroud dilemma. Like it or not, the (nice) problem is there for the manager. He says there is an option to play both through the middle, with Alexis deeper, which might hint that he already sees Ozil as a striker. Indeed, in the most recent games, Ozil has played very high up, making runs off Alexis than the other way round. As I discussed in my last column, one of the reasons for Ozil’s change of role, so to speak, is because his areas of operation are being occupied by his teammates, and that’s reflected by the pass charts showing where he receives the ball. \

He’s not really picking it up in the channels where he likes to, because the wide players are coming in, whilst Alexis is dropping short most of the time. That means the space is high up – or deep, where he picked up the ball for the first goal. 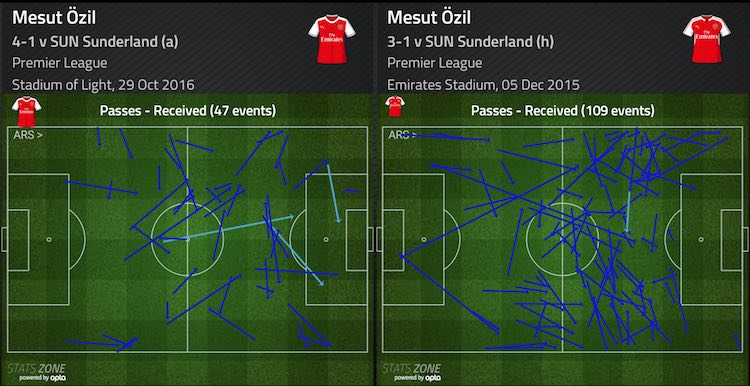 The formation against Sunderland could arguably be labelled as a 4-2-2-2 or 4-2-4-0 with Alexis frequently dropping short. Wenger said before the game that “in my taste, Alexis still comes too much to the ball, because he likes to have the ball. We have enough playmakers in our team and we would want him a bit more… we do not want to forbid him to come to the ball, but to get in a bit more with off-the-ball runs. But that’s why when we have Walcott it balances well, because when he comes, Walcott goes. This is a good mixture, a good working unit.”

Alexis balanced both sides of his game for the first goal against Sunderland, initially being the outlet for the counter-attack by dropping short. And he was still in the number 10 position when Arsenal progressed play forwards but as the attack was switched wide, showed determination to be the man in the box. He was there again for the final goal, and seemingly more comfortable being on the shoulder on counter-attacks.

On the other hand, not much needs to be said about Giroud that we didn’t know already. This might be new territory for him, being the super-sub, as previously his place in the starting XI wasn’t properly challenged, but it suits him somewhat. It means he doesn’t have to work the defence as much so when he comes on, he can just concentrate on being in the box. Certainly, Ozil missed him, and his cross for the third, saw them rekindle their dangerous partnership. It took a while but Giroud’s introduction was able to add gloss to Arsenal’s performance.