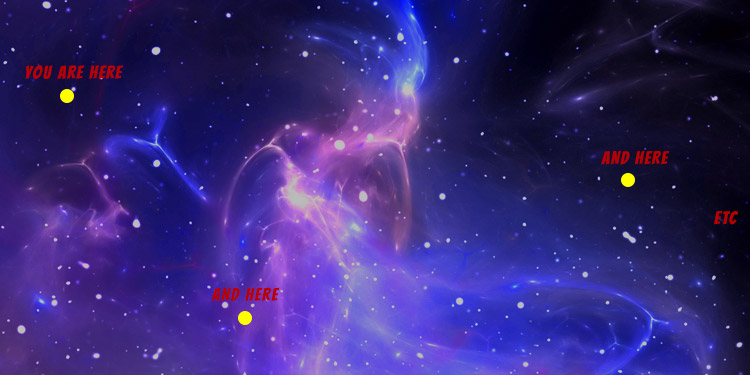 So this weekend’s opposition were knocked out of the EFL Cup last by the team we’ll face in the next round. Sometimes I wonder to myself: is the universe just random or is there a higher power making these crazy coincidences happen all the time?

This is not one of those occasions. We face Sunderland on Saturday and last night they were eliminated from the EFL Cup by Southampton who we’ll play at the end of November. Isn’t that incredible? No, it’s how football fixtures work, don’t get carried away with yourself.

If you were to suggest that our universe is simply one part of a multiverse – where billions of other universes exists – then that’s something to get your head around, but not this. I like the idea of that however. The multiverse thing, not Arsenal v Southampton in the League Cup. I mean, I don’t dislike that, but I’ve seen it before quite recently. It wasn’t the best night we ever had.

The concept of infinite possible universes, of which our universe is just one, is much more interesting. I don’t know if they’d be parallel universes, where we all exist just slightly differently, or something else. Maybe there’s one where humans have extra powers and are really good at climbing stuff like a video game character, or one where Jose Mourinho isn’t the very essence of evil. I simply can’t say.

There’s probably one where we’ve won the league for the last 12 seasons in a row and people are getting fed up it. ‘Wenger out’, they cry, ‘for I am in need of something different. This winning all the time thing is tedious when you win all the time. I wish we didn’t win all the time just for a little variety and that.’

Look, I don’t know. I’m not an Astro-wotsit or a Mega-physics guy. I’m just someone who writes a blog about football. All I am saying is that these universes somehow crossing over from time to time would completely explain why it is I couldn’t find my car key yesterday and when I went back to do a second sweep of all the places I usually leave it, it was in the first place I looked. BUT IT WASN’T THERE INITIALLY.

Some would suggest that is scant evidence for a theory of such scope and magnitude, but it’s with small discoveries like that we humans have made bigger ones. Would we have pasteurisation if Louis Pasteur hadn’t been trying to brew a particularly hoppy IPA down in his cellar? No, we would not. He was mad for beer. Imagine if he was like me when I decided I didn’t like the taste of beer. Sure, I was 6 but that’s not the point. We’d have been in big trouble.

Maybe there’s a universe where there wasn’t violence at football like there was last night between West Ham and Chelsea fans. Maybe it’s the fault of a stadium that’s not properly set up for nights like this, and there seems little doubt the London Stadium requires West Ham to do a lot more than it has until now, but it’s depressing to see this kind of stuff raise its ugly head again.

Perhaps at some point historians, or visitors from another universe, will perform a study of the human race and ask: what were their gifts? They might point to the creation of art, music and literature. They might say the ability to understand mathematics and how it is at the core of so much that we do. They could say sporting endeavours, or a will to understand and explore.

In the end though, they’ll say the thing that we were best at was the ability to divide ourselves into ever-decreasing factions in order to fight with each other and to justify duffing up the other side.

‘He was asking for it because he prefers a different football team than I do.’

Wait till they get to the ones who support the same team but want to smash each others faces in because their opinion of who should pick the team every week differs. Sorry about this, right now I’m trying to will myself into that universe where I’m really good at climbing shit. Maybe I can jump really, really high too. I’ve always wanted to be able to do that. Not like a high jumper in the Olympics, but like Superman. But better than Superman because I’ve always found him a bit of a drip.

I mean, I like that he’s essentially hobbled by his inherent goodness but I really feel like he should impose himself more in certain situations. He could definitely kick the crap out of Batman though, that’s not even a contest. It’s like a guy with actual super powers and who CAN FLY against Elon Musk with a butler and a cool car. Please.

In other news, Carl Jenkinson is really happy to be back. And while you can think what you like about his ability to play a significant part or not in our season, if Carl Jenkinson is happy then I’m happy. Imagine seeing a sad Carl outside the shop, tied to a railing waiting for Oxlade-Chamberlain to come out and take him back home. It’d be heartbreaking. I don’t think I could cope.

I think I need some breakfast. And more coffee. And some more substantial Arsenal news.