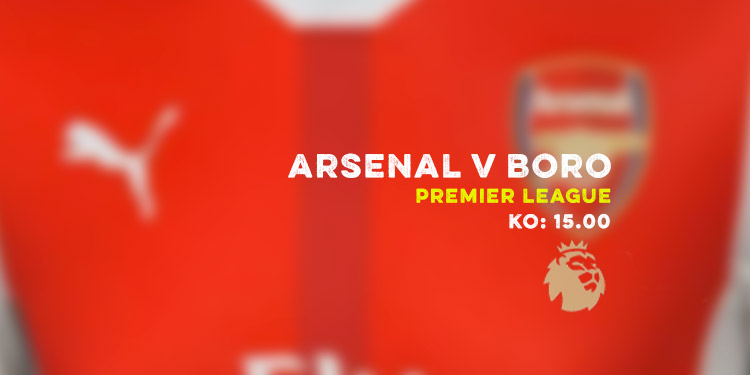 It’s Boro today in the Premier League and a game that gives us another chance of building this momentum we’ve got going. It’s 9 wins from the last 10, unbeaten in the last 11, 23 goals in our last 7 games with just 4 conceded – it’s set up for us to continue that run.

As ever the usual caveats apply: don’t take anything for granted, respect the opposition, keep that ‘humility’, but given the form we’re in and the way we’re playing, you’d have to feel pretty confident we can get the job done. In terms of the team, I think it’ll be more or less the same as we saw against Swansea last weekend, perhaps with one or two tweaks.

Grantit Xhaka is suspended, of course, so the manager will decide between Francis Coquelin and Mohamed Elneny to fill that gap, and the pair may even find themselves deployed together if there’s any risk of aggravating Santi Cazorla’s Achilles injury. He didn’t look unduly bothered by it in the training pictures yesterday though, so chances are he’ll be available.

Alex Oxlade-Chamberlain’s midweek goal probably won’t be enough to win his place back ahead of Alex Iwobi, but at the very least he’s putting a bit of pressure on him which can only be a good thing. Alexis was taken off to keep him fresh, likewise Walcott, and with an EFL Cup game next week there’s another chance to provide those waiting in the wings with some playing time. So today should be full blast to try and get those Premier League points.

Quite how Boro will approach it I’m not sure. I guess they’re going to try and stay as solid as possible, perhaps do what Burnley did with obdurate, organised defending, because if they come out and play chances are we’ll pick them off with the pace we have from the players who are in such good form.

If I were their manager though, I’d be looking at sections of that Swansea game and parts of the first half against Ludogorets and reminding my players that Arsenal are far from flawless at the back. We provided them with chances in both games, more composure from the opposition would certainly have changed the way those games went, so that might be something they’ll be looking to exploit if they can.

Hopefully it’s something we’re looking at too. As good as we’ve been going forward, by the manager’s own admission we could do with tightening up a little at the back. If we can do that and keep firing at the other end, today should be a good day come 4.55pm.

It’s also Arsene Wenger’s 67th birthday today, something that in his focus on the game had passed him by. It did allow him to ponder on his age though, and the concept of being ‘past it’:

I live in a competitive world and it’s down to what I produce that has to be judged. My age should not interfere with that, but if you don’t do well the age quickly becomes the problem.

Wenger says it applies to players too, which is natural enough. Only this week on Irish TV Eamon Dunphy said there were signs that Lionel Messi was showing ‘signs of decline’, as the Barcelona man scored his 37th hat-trick of his career. Proof positive there folks, as if any of us need it, that saying outrageously stupid things is no impediment to earning a living.

Anyway, the news that another year has passed allowed the Arsenal manager to become somewhat contemplative, wondering about life after football:

Nobody lives a whole life by being motivated by the next game, stops suddenly and goes to church every day. If God exists and one day I go up there and he will ask: ‘Do you want to come in? What have you done in your life?’ And the only answer I will have is: ‘I tried to win football games.’

Love it. His celebrations, he says, will be 99% tied in with what happens today against Boro, and on this I call him out on what is an egregious lie. We all know it’s 100%. ‘Each defeat is a dagger to my heart’, he told Rog from Men in Blazers, it’s hard to eat Rice Krispie cakes and play pass-the-parcel when you’re trying to remove that stabby knife.

So, let’s hope the players can give him a nice day by doing what needs to be done on the pitch today. As ever we’ll have a live blog of the game for you, so if you’re stuck out and about and can’t see the game, you can keep up to date and see goal clips etc. Check back in later for a post with all the info, or bookmark our default live blog page which will update automatically as we approach kick off etc.

To help pass some of the time, check out this week’s Arsecast with Jim Campbell from Football Ramble, looking ahead to Boro, back at Ludogorets, and much more.

Right then, catch you later for you the game!