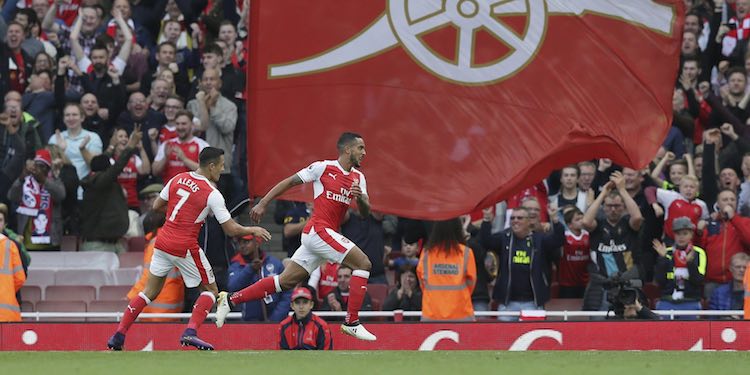 “Hello, we are Arsenal. We have a job to do and we are going to make hard work of it for no good reason other than that’s what we do.”

That was a big, big win yesterday, make no mistake. We made it a lot more difficult for ourselves than it should have been, but with Man City and Sp*rs both dropping points, getting the maximum from this one was hugely important. That, first and foremost, is what we should be concerned with.

All the same, the way we insisted on allowing Swansea back into it was worrying at times. The game was a fairly dull affair but sparked into life when Theo Walcott put us ahead. At first viewing I thought it was a bit of a lucky goal, bundled in at the near post, but it was actually a smart finishing, taking advantage of some defensive dithering. The build up was nice too involving Iwobi, Alexis and Bellerin.

A few minutes later it was 2-0, Walcott again taking advantage of unconvincing defending and when the ball dropped to him from a corner the touch, turn and finish was excellent. Just what we wanted. Put Swansea on the back foot, kick on from there and maybe score another, but we essentially gifted them a goal. Granit Xhaka was caught on the ball on the edge of the box, Gylfi Sigurdsson took it on and curled a fine shot past Cech, but I did wonder if the keeper might have done more.

At the end of the half, Swansea had the first of many chance to equalise, but Jordi Amat could only head straight at Cech. The way the game went on, it’s almost as if that’s what they were instructed to do because that’s what they kept doing.

Mesut Ozil’s brilliant birthday volley extended the lead 12 minutes into the second half. He lashed the ball into the roof of the net at the far post from a lofted Alexis cross. That’s the German’s third goal of the season, and the sixth assist from Alexis. Interestingly, all three Ozil goals have come from Alexis passes. The Chilean is our ace provider so far, it’s a curious bit of role reversal. Not that I’m complaining or anything.

If I were to complain, it would be about our defending for Swansea’s second. Iwobi tracks back but stops at the crucial moment, Barrow roasts Monreal (who endured a torrid time in that second half), and when his low cross found substitute Borja, Mustafi – otherwise very good – had switched off completely, allowing the Spanish striker to tuck the ball away pretty easily. A catalogue of errors really, and both goals were so easily preventable.

Then, the Xhaka red card. I think it’s a bad decision. It was a definite foul. It was deliberate and highly cynical, but that’s a yellow card. If those kind of fouls merit a red then there’d countless red cards every weekend. I think, in real time, it looks a bit more like a kick than it actually is. It’s much more of a trip, and considering it was on the halfway line, I think a red card is just wrong.

I did like Arsene Wenger’s comment, saying, “It looked harsh to me, but it was a deliberate foul. It looked a dark yellow – and the referee went for a bright red!”

We’re not going to appeal it, so Xhaka will miss three games. I do wonder if we didn’t have such cover in the midfield if we’d be more inclined to seek a reversal of the decision, but maybe the manager wants to ensure the Swiss international learns his lesson. Three games for that is very harsh though.

So with 20 minutes plus injury time to go it left us in a bit of a difficult situation. Swansea obviously pressed for an equaliser and boy did they have some chances to get it. Sigurdsson shot over, and there were maybe three chances from headers which they spurned, heading softly at Cech each time (as per instructions, like). It wouldn’t be unfair to say we rode our luck a little.

Still, at the other end we had chances to put the game to bed. Walcott hit the post and saw the ball roll agonisingly across the line, Bellerin poked one towards goal but saw Fabianski rather meanly get in the way, and with almost the final kick of the game Oxlade-Chamberlain set up Walcott for what should have been his hat-trick but his shot clipped the top of the bar on the way over. I guess there’ll be nobody more frustrated than him at failing to get the third goal, but given the scoreline I guess the focus should be more on the two that he did get – continuing his fine run of form at club level.

What looked to become a comfortable afternoon finished in a very uncomfortable way. But we just got over the line. I thought we played some fantastic football in patches but at 2-0 maybe we lost our focus a bit. When we were down to 10 men at 3-2, we could have scored the fourth goal but we could have conceded as well. In the end we just got over the line. We played together, with spirit until the end. It was difficult at the end.

It was more difficult than it ought to have been, and I think those defensive lapses caused us jitters. From a very comfortable 2-0 you could almost sense the nervousness at 2-1. In terms of the performance, those errors meant you couldn’t put this in the same bracket as our best this season, but when you look at the amount and the quality of the chances we created, the attacking side of our game was pretty effective (let down a bit by the finishing).

I’ll admit I was waiting for what felt like the almost inevitable sting in the Swansea tail, but we got through it, and as I said at the beginning those were three very important points. We’re now second, level on points with Man City, and just one between the two sides when it comes to goal difference. It’s also our sixth successive win in the Premier League, our best run of consecutive wins since we did eight in a row from February to April 2015.

I thought something the manager said afterwards was interesting, talking about this bit of momentum, he said:

What’s good is that we win the games, but in the dressing room we feel like we can go up another level. I felt that sometimes we went a bit too easy in some situations, and that’s what we want to correct.

Fixing the bad bits of Swansea shouldn’t be too difficult, a bit more concentration is all it should take, but the fact the players feel like they can play better and do more is great to hear. There’s clearly some confidence in the team right now, so let’s hope over the next few games we can see that in the way we play and in the results.

For now though, it’s a pleasant Sunday with a win under our belts. We can start looking forward to the midweek action over the next couple of days. Have a good one.