Well, wasn’t that pleasant?! Scoring goals, winning the game, feeling quite good afterwards. This winning lark is rather good. Arsenal don’t need any highly paid consultants, I can offer some free advice this morning: do that more often and everyone would be happier.

Arsene Wenger recalled Mesut Ozil to the side, and paired Granit Xhaka with Santi Cazorla behind him in the midfield. Good choices, it has to be said. We obviously look a much better attacking team with the German in it, not least because he and Alexis are very much on the same wavelength and that increases his effectiveness as a striker, but with Xhaka pulling strings from deeper in the midfield, it gave us an extra dimension.

It’s no longer a case of ‘Get it to Mesut’ and see what he can do, Xhaka was pinging long passes, stretching the Watford defence, and even laying them on a plate from deep as he did with a fantastic pass to Theo Walcott at one stage.

Had Heurelho Gomes not done his usual trick of saving lots of shots, we could have been completely out of sight by half-time. As it was, we had to settle for a mere 3-0 lead.

The first came from the penalty spot after a Watford defender tried to take Alexis’ head off. Quite why the home fans decided they’d boo the Chilean every time he got the ball is beyond me, maybe they should have directed that at their WWE defender, but there you go. It was all a bit Stokey. Anyway, Santi Cazorla stepped up and drilled the ball down the middle to make it 1-0.

Gomes made some more saves, before Alexis doubled the lead. We worked the ball nicely through midfield, it came to Walcott on the right hand side of the area, his cross to the back post was excellent, and although Alexis didn’t get the contact he wanted, it was sufficient to bamboozle the defence before bouncing over the line. The last gasp clearance was too little too late and it was 2-0.

Xhaka was involved the third, setting Oxlade-Chamberlain free down the left. He released Alexis, the Watford defender literally just stood there looking at him, and when he spotted the run of Ozil he laid it on a sixpence for the German to thump home a header for Arsenal’s third. There was a lot to like about that goal, the desire of the Ozil to get in there and make something happen was great to see because too often we lack that kind of movement into the penalty area and end up going backwards again.

The second half was different though. The manager said afterwards the players aren’t physically ready to maintain that kind of momentum for 90 minutes, and it’s natural when you have a 3-0 lead that you’re not going hell for leather. Still, if we’d been able to get anyone on the end of good low crosses from Bellerin and Walcott, we’d have made the game completely safe before they scored.

They got one back before the hour mark, Oxlade-Chamberlain was caught out of position and ball watching as they came down the left, and after a cross had pin-balled around our box, maybe Xhaka could have done more, but it broke kindly for Pereyra and he got a goal on his debut for the Hornets. There’s always that part of you that can then envisage an Arsenal self-destruction. Ighalo came close with a great overhead kick and Petr Cech was probably busier than we’d have liked, but I thought we pretty much kept things in hand and that was encouraging.

Had our decision making been better in the final third too, we’d have been well and truly safe. Oxlade-Chamberlain ignored teammates who would have had a tap-in to try a chip which didn’t even come close, and Alexis did something similar late on when Walcott was wide open, but in the end I thought the three points were well deserved and there were good things to take from the performance in general.

I think overall the performance was a strong one. Very fluent and a massive first half. We were 3-0 up at half-time and in the second half we still created many chances but we missed something in the final ball, like we did at Leicester. We are not capable in the end to maintain completely for 90 minutes exactly the same intensity physically, but overall it’s a very encouraging performance and a good win.

There seemed to be a bit more cohesion, especially from an attacking point of view, but when you have Mesut Ozil that’s always likely to be the case. Xhaka definitely adds something to the way we play, the range of his passing was fantastic and he looked solid enough defensively too, and at the back Koscielny and Holding were very good. The youngster again drew praise from his manager and while it’s obviously early days in his career, he deserves the props after his last two performances.

The boss then confirmed the signings of Lucas Perez and Shkordran Mustafi, saying:

We have bought two players, you know. Mustafi and of course Lucas Perez, we’ll integrate our team now. We have a good little break, we can help them join the squad. Perez, because he’s not in the Spanish national team can come straight away, for Mustafi we have to wait because he goes away with the German national team.

They’ve had their medicals and all that’s left now is for the paperwork to be completed. I suspect we’ll probably see official announcements tomorrow, but when Wenger is saying it’s done on TV then you know all is well. We can obviously examine the deals more closely as when they’re confirmed, but taking three points and bringing in two new players goes a long way to lighten the mood.

From what he said, it looks as if that’s it in terms of inward business, but there might be a departure or two before the deadline. Eagle-eyed folk have noticed that Mathieu Debuchy no longer appears on the kit builder on the official website, so all those Debuchy fans who want his name on their new shirt will be disappointed. If he went, a couple of younger players went out on loan, that wouldn’t be a surprise, but we have until Wednesday at 11pm to sort all that out.

The other big talking point from yesterday was Arsenal’s decision to wear the third kit, for no good reason at all. In fact, it was a terrible decision because the third kit, with it’s highlighter market socks and yellowy stripes on the shirt, clashed with Watford in a big way. It can only have been a marketing decision, and quite frankly it was one I hope the manager will shoot down in future. If we have no other choice but to wear the third kit, fine, but when our home kit would have been just perfect, that’s what we should have worn.

Through the magic of technology and our state of the art … er … art department, we’ve mocked up how it might have looked as opposed to how it was: 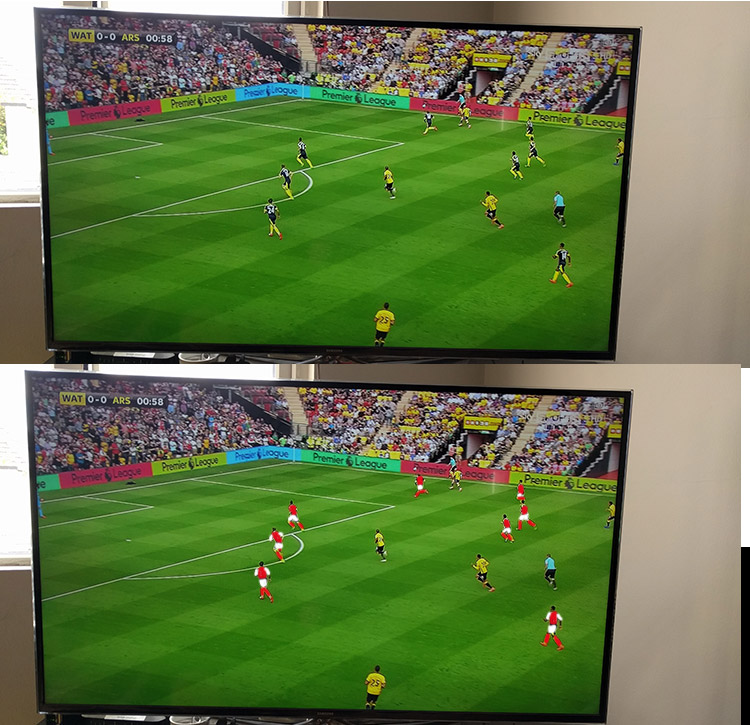 Pretty easy to see which is better. Some people suggested it’s because the Watford keeper wore red, but as far as I’m aware, the away team’s colours take preference over the colour of the keeper’s kit. He could have worn something else, and in the end there’s no doubt this was Arsenal and Puma pushing the third kit because they could, not because it was the right thing to do.

In the grand scheme of things it’s hardly the biggest issue we face, but it made for pretty uncomfortable viewing on TV. I’ve yet to hear from people in the ground as to how it was for them, but when Arsenal can wear red and white, we should.

Right, that’s just about that. I should mention that Tom has been doing sterling work this weekend and we now have the arses back again, so you can comment to your heart’s content. It’s been a pretty mammoth task for him, so flowers and gifts of booze to Arseblog Tom, 7 Edinburgh.

Have a good Sunday, until tomorrow.

Previous articleWatford preview: How will we make the midfield tick?
Next articleInterlull is here, but who’s heading out before the window closes?