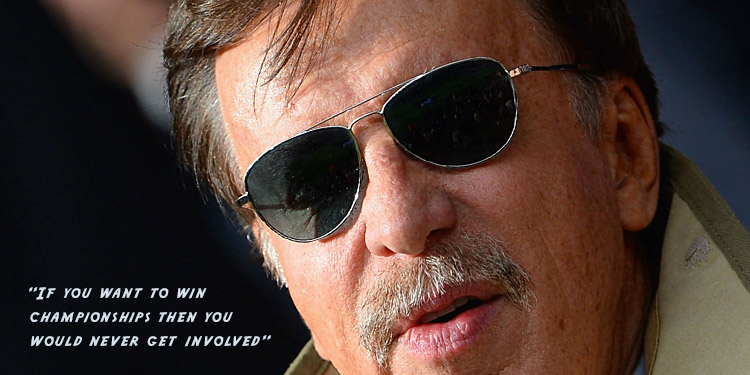 Hello, what a day yesterday was. We came home first in the 100m Nothing, followed that up by setting a World Record in the 400m Nothing Hurdles, and finished it off with another gold medal in the Synchronised Nothing. The Nothing Olympics are going fabulously for us.

We are two days away from playing champions Leicester who will still be smarting from their opening day defeat to Hull City, but who will feel somewhat boosted by the fact that Riyad Mahrez has signed a new deal with them. All the talk of Arsenal interest has come to nothing, but it looks more and more as if this was his agent creating some buzz in order to strengthen their negotiating hand.

As much as I would have liked Mahrez, and I really would have, I don’t think we even tried. I don’t believe the stories about a bid, and the thing about the way we do business makes it easy for other clubs to say stuff because they know we stay silent. If a report says we’ve made a bid for a player, we never come out and refute that.

So the Mahrez camp knew they could drip feed stuff about bids being rejected, safe in the knowledge that we’d keep schtum. I mean, Leicester must have known there were no bids either but all that smoke leads the lovely fire of a massive pay-rise and a new contract for last season’s Player of the Year.

So, Claudio Ranieri has lost N’Golo Kante, but managed to keep Jamie Vardy and Riyad Mahrez, and regardless of Arsenal interest or not that’s a real boost to them. As players their stock may never be higher but Leicester managed to ward off potential suitors, and you’d imagine the team and the fans will be in fine fettle come Saturday.

Arsenal, meanwhile, saw Valencia say they were negotiating with Liverpool over the transfer of Mustafi. It sounds very much like they’re trying to force a decision one way or the other. The response they seem to have been given is a tit-for-tat effort in which we’re all of a sudden linked to Atletico Madrid’s 21 year old Uruguayan Jose Gimenez.

None of which changes the fact that we’re playing the champions away from home in two days. To be fair, we were the only team to beat them twice last season – making us moral champions ? – and perhaps Arsene Wenger will have decided that the players who came back late may well be fit enough now to take part.

The centre of our defence would not be as weak if we had Laurent Koscielny in the team, and that’s the only real option we have to bolster than position. The chances of any new player arriving in time to play are tiny, so it remains to be seen if the manager thinks another week of training is enough for Koscielny to come back into the side. If he’s still determined to ease him back into action then it’ll be Holding and Chambers again, and there are obviously concerns over that.

It looks as if the manager’s press conference is taking place this morning, so we should have a better idea about it later on. We’ll have all the coverage of it over on Arseblog News, so stand-by for that.

Yesterday we ran a story – using quite vague language I’ll admit but that’s how these things go sometimes – about how Alisher Usmanov is considering selling his stake in Arsenal to go all in former partner Farhad Moshiri at Everton. The Iranian businessman bought 49.9% of the club earlier this year, and considering Usmanov’s position with this club, this makes a lot of sense.

To all intents and purposes he’s a lame duck at Arsenal. There’s nothing beyond a perfunctory relationship with Kroenke, his 30.05% will never ever get him a seat on the Arsenal board, and although the value of his investment may increase, to have genuine influence elsewhere must surely be tempting.

Interestingly, I received a number of emails after the story – from both Arsenal fans and Everton fans – who insist they’ve been hearing something about this for a while now, and if he did decide to sell it’s worth considering the implications for Arsenal.

Would he sell to Kroenke? I don’t believe he would, saving us from the nightmare scenario of KSE at close to 100%. That means somebody new would have to come along. Would that somebody new be prepared to buy 30.05% of Arsenal to take over as a lame duck shareholder? I doubt that very much. Would that then mean somebody with a good relationship with Kroenke, not seen as a threat or an outsider who can try and have some influence from inside, or somebody prepared to try and shake things up? Your guess is as good as mine at this point.

While I do think some of the stuff about how this is a club in absolute crisis is overblown, there’s little to like about Kroenke and KSE being the majority shareholders. As I said the other day, he’s an absentee landlord far more concerned with his pet project in LA right now, and when it comes right down to it he doesn’t give a single solitary shit about Arsenal from a sporting point of view. We are an investment vehicle, part of a portfolio of sporting franchises in which his interest is 100% financial.

Remember, this is a man who makes up stories about imaginary helicopters and said of being the owner of a club:

If you want to win championships then you would never get involved.

He remains pretty much hands-off, for now at least because for all Arsene Wenger’s faults he knows he can’t challenge him. But having an owner who doesn’t care means there’s no pressure from above. In fact, there is no above Arsene Wenger and that’s not healthy by any reasonable standard. It means we can be complacent, it means we can sit on our hands and not do business, it means that he can take his £3m every year for ‘advisory services’ and people feel like that’s justified in some way.

As much as this club needs something fresh from a managerial point of view, it also needs it at board level. Because all the hard work and planning that went into building the new stadium – an extraordinarily ambitious project when you step back and look at it objectively – is now being undone by corporate outlook that sees ambition as a dirty word because it often involves risk.

We did so much and worked so to make the move and to build the new stadium, but rather than embrace all that now that we’ve come through the other side, we’re paralysed by inaction and unwillingness to do the best we can.

Arsene Wenger has long spoken about how a club should not live outside its means and spend only what it generates. Not everyone has agreed with that, but it’s not an unreasonable outlook to have. But when you don’t even do that, when all the resources and money you’ve worked to earn remains unused when the team really needs it – when you’re living within your means season after season after season – then you’re doing it wrong.

Not only would an Usmanov sale have implications for Arsenal, it would mean there’s another big player on the Premier League scene – as he would undoubtedly splash plenty of cash at Everton. And that’s another thing we’d have to contend with.

The Usmanov ‘camp’ have reportedly denied the story, but then of course they would publicly. I think this is one to really keep an eye on.

It’s been a quiet week without the ‘arses’ and all the intelligent, witty conversation contained therein, but we’re hopeful of restoring everything in the next couple of days. Fingers crossed, and I’ll let you know as soon as we have it done.

Tim Stillman is here later with his column, more from me tomorrow including an Arsecast. Until then have a good one.