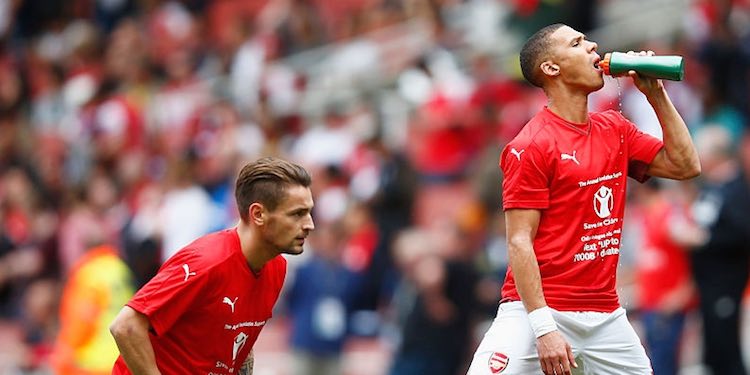 And so we’re back. When I say ‘we’ I mean the Arsenal ‘we’ and not the Arseblog ‘we’ because this particular ‘we’ didn’t go anywhere.

A long plane journey back probably means a day off today to recover, recuperate and avoid at jet-lag if at all possible. It’s certainly one of my least favourite kinds of lag, second only to the kind you get when you’re playing FIFA online against some bastard who then scores and all of a sudden, for some mysterious reason, the game becomes unplayable.

Is this a thing? Is it possible to rig it like that? They go 1-o up, then start downloading a massive file so the players in the game stop – start – stop – start – stop and you just rage quit because it’s annoying. I think it is. But look, the Arsenal players have time zones to catch up on and all the rest before they get a couple of days training in and then go off on their travels again.

They leave for Scandinavia on Thursday, playing against Viking FK at the Viking Stadion in Stavanger, Norway, on Friday August 5th, before facing Man City on Sunday August 7th at Ullevi stadium in Gothenburg. I know pre-season is now viewed as another commercial opportunity, tours and games like this earn revenue and help sell shirts and merchandise, but you’d be hard pressed to make a case that they’re ideal preparation for a new season.

Arsene Wenger long resisted the travel and the disruption, but eventually even he had to cave. I suspect he’d much rather we spent our time at an idyllic Austrian training camp, with all the focus on the training. The only thing you would say though is that almost every other team is doing the same during their pre-season so you’re not really at a disadvantage.

The other thing we’re having to contend with is the late arrival of some of our key players. Arsene Wenger says he’ll give some playing time to Aaron Ramsey and Alexis Sanchez in the next couple of games, which makes sense if their fitness work is a little behind the others. I suppose there’s good news that Alexis’ ankle doesn’t appear to be an issue, but having made mistakes in this regard before I hope when it comes right down to it we’re easing them back into first team action slowly and not right from the start.

Santi Cazorla is taking part in our pre-season, but the manager reckons it might be another couple of weeks before he’s fully involved, saying:

At the moment he is not completely there on the fitness front. He’s a bit behind the others physically but I think he will be alright, maybe not on August 15th, but at the end of August he should be alright.

Add Mesut Ozil, Olivier Giroud, and Laurent Koscielny to the mix, and Wenger is going to have to try and muddle through the opening games a bit. Unless, of course, new additions are brought on board between now and then.

There’s also a little bit of an injury worry over Jack Wilshere. He has a knee problem which sounds innocuous but when it comes to Jack there’s always that worry that it might be something more serious. It’s not like there isn’t precedent in that regard, but at least midfield we do have options, and hopefully it’s just as short-term as they think it is. Like Alex Oxlade-Chamberlain, Wilshere has to stay fit first and foremost, and then give the manager some thinking to do by playing well enough to force his way into the team.

There doesn’t appear to have been any transfer news overnight, the only story that really emerged yesterday was West Ham trying to take Kieran Gibbs on loan for the season. The move was, understandably, rejected by Arsenal, but his situation is an interesting one. There’s a good reason why we were linked with a host of left-backs over the last few months.

Having fallen behind Nacho Monreal in the pecking order, he started just 3 Premier League games last season. If he’d been thinking about going somewhere else to play more regularly, that wouldn’t have been a surprise. Earlier in the summer there was strong interest in Swiss international Ricardo Rodriguez, but that’s gone very quiet now, and it looks at this point as if he’s going to stay and understudy Monreal again.

Still, it wouldn’t surprise me at all if, as the month of August draws a close, there was a little bit of movement here. I wonder how happy Gibbs is with the whole situation, and with Mathieu Debuchy clearly unhappy with his lot after losing his place to Hector Bellerin, having two disaffected full-backs might be something the manager feels is counter-productive in some ways. One to keep an eye on anyway.

Finally for today, a reminder to check out this week’s Arsecast Extra. James and I discuss all the latest goings-on, there are some fantastic questions from listeners to get our teeth into, and there’s plenty to keep you going there for an hour or so.

Right, have a good one. More news when we have it.