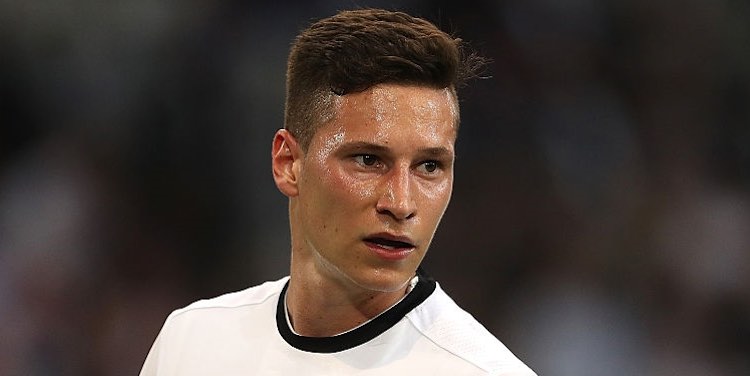 Interesting stuff overnight from Germany as Julian Draxler told Bild that he wants to leave Wolfsburg. The 22 year old only joined them last summer, in a deal estimated to be around €35m.  Now, just over 12 months later he wants out, citing a verbal agreement he has with the club to allow him to go if a major European side came in for him.

I want to leave Wolfsburg. It was always clear between all parties that I would like to go to a top international club if the opportunity arises.

I was verbally assured with my transfer in August 2015 that I can leave the club when given opportunities.

Hmmm, verbal assurances aren’t worth the paper they’re written on, and if it was that important to him why wouldn’t he have that as a clause in his contract? Maybe he does. Maybe he has a release clause and Wolfsburg, having already sold André Schurrle, are ensuring that if Draxler does go it’s a deal that suits them more than it does the player.

With a contract that runs until 2020, in a market that has gone bat-shit insane, it would take a hell of an offer to make it go through. Yet as Arsene Wenger said when talking about Paul Pogba’s proposed £100m deal to go to Man Utd from Juventus:

Arsenal can afford a lot this summer, so if he’s a player we really want, we should have no compunction in paying the fee required to convince Wolfsburg to sell. This is a guy the manager has had his eye on for a long time too. Back in January 2014 there was talk of a huge bid from us to try and prise him away from Schalke. Ultimately it didn’t happen but the interest was very real.

Now, the pressure’s on from a recruitment point of view. There’s been so much talk of Riyad Mahrez and Alexandre Lacazette that if we did have a go for Draxler it wouldn’t surprise me one bit. A couple of years ago there was talk that Wenger’s plans revolved around converting him from a wide man into a centre-forward. It would be typically Arsenal though to eschew a genuine wide-player and an established, if not always convincing, striker to sign a player who falls between the two stools.

Of course there’s always the possibility that we’re putting 2 and 2 together and coming up with 5. We’ve seen how players this summer are quite prepared to manufacture and/or use interest from other teams to get themselves a better deal at their current clubs, but this just strikes me as one that might have something to it.

For a start, he’s not a striker, which would annoy people, and as a wide-man he’s nowhere near as prolific as some might like – although he did get 9 goals and 5 assists last season in the Bundesliga. Wenger does love to recalibrate a player’s attacking hoo-ha (technical term, sorry for the confusion), and given the relative scarcity of quality on the market, this seems as Arsenal an option as any other.

You’d also have to wonder about Draxler’s decision to go so public with his desire to leave. It would be a very brave move if he did that in the hope of merely sparking some interest in his signature. It’s much more likely he knows that there’s an option there for him and is trying – in fairly typical footballer style – to make his position at Wolfsburg untenable to help force that move through. Someone’s in for him, whether it’s us or not remains to be seen.

The caveat to that kind of power play though is that the selling club can often become quite difficult to deal with. Quite rightly they’re going to feel a bit cheesed off by the whole thing and will want to extract maximum value without making it easy for the buyer or the player in any way. And we’re not always known for our ability to deal with those kind of situations.

So, in conclusion, it would not surprise me one bit if we were the club who have let it be known to Draxler that we want him, but I also wouldn’t put it past us to leave him stranded if it all got a bit too crotchety. Let’s see.

Meanwhile, there appears to be a little clarity about our goalkeeping situation for next season. David Ospina was rumoured to want out, which is completely understandable as international keepers of his age rarely want to spend most of a season on the bench, playing cup competitions or early rounds of Champions League to add some interest to an increasingly dull tournament. However, he seems to have indicated a desire to stay, saying:

“I have a contract with Arsenal, I’m happy with the team for now. We are fighting for the top of the league.

Of course that could change. He was linked with a move to Turkey but that seems to have died down. Wojciech Szczesny is reportedly going back to Roma despite the fact they brought in a Brazilian goalkeeper earlier in the summer, so it looks like Ospina will deputise Petr Cech this season again.

Unless something happens in the final weeks of this transfer window, and while we’re all focused on the big things like STRIKER and CENTRE-HALF, I still think there’s going to be a number of smaller deals going down (in and out) as we sort out the squad once and for all.

Right, that’s your lot for this morning. Have a good day.