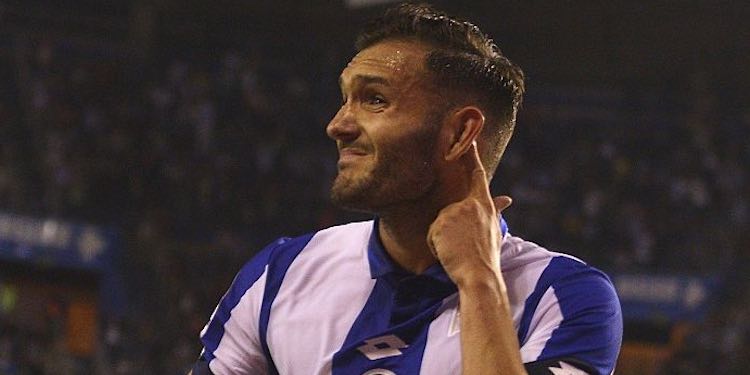 Morning all. It’s been a quiet week in terms of actual things happening, which leads to introspection, which leads to posts like yesterday. Anyway, thanks all for all the feedback on it, it certainly got people talking and the sense that people find it more difficult these days to identify with Arsenal seems to be shared by many – if the emails I got are anything to go by.

It’s now Thursday and we’ve got a game against Watford on Saturday. After that there’s an Interlull and transfer deadline day to deal with. And no transfers. But wait, what’s this? After a week of almost deafening silence in that regard something happened late last night.

El Confidencial – the newspaper of influential readers – ran a story saying that Arsenal had come in with a €20m bid for striker Lucas Perez. The 27 year old was apparently on Everton’s radar, but this week a ‘surprise’ offer had come in from us and they say that the player is very keen to join.

I’ll admit he’s not a player I know a huge amount about, but he’s had an interesting enough career, starting in Spain, having some difficult spells abroad, before coming back and making good at his boyhood club. He’s 27, he’ll be 28 next month, and last season he scored 17 goals for Deportivo – including a streak when he scored in 7 consecutive games, beating a club record held by Brazilian legend Bebeto. There’s more in a Sid Lowe piece on the Guardian here.

The report says Arsenal watched him a lot last season and were generally impressed but nothing much happened. Not until this week when they say we ‘entered strongly’ (fnarr) and look to have activated a release clause in his contract. The news has been picked up this morning by Marca, who say he will sign for three or four seasons, and this one feels like it has some legs.

Sometimes you see a transfer story and you just know that it’s a big pile of steaming donkey bollocks. Other times, despite the fact it’s a bit out of the blue, you just get the sense that there’s something to it, and there’s just gigantic whiff of ‘Arsenal, of course!’ from this one. We spend all summer throwing names about willy-nilly then we buy a player out of the blue that nobody had ever even thought of.

Here’s that player and it wouldn’t be any surprise to me if this is where our money was going. He’s definitely something of a late bloomer in terms of scoring in the big leagues – perhaps not dissimilar in profile and style to Jamie Vardy when you think about – but he’s already off the mark this season scoring a late winner from the penalty spot in Deportivo’s opening game of the season. He got 17 last year, with quite a few assists, 10 one season for PAOK, and here we are.

Perhaps the other thing to consider here is that if this is the man we want, then €20m is not a huge chunk from our transfer budget. Maybe that will enable us to finally make a decision over Shkodran Mustafi whose price was worrying us in case we didn’t have enough left over to buy that forward we wanted *cough*. That said, there have been suggestions we’ve shifted our central defensive sights from Spain to Italy, so let’s keep an eye on that over the next few days.

Overall, there’s some sense of relief that something is actually happening. Or at least some people are saying some stuff is happening. If we’re almost in ‘Anyone is better than no-one’ territory when it comes to actual recruitment, I guess you could say the same thing for news. And as he is a bit of an unknown quantity, there’s no better, more in-depth, and definitive way to get up to speed with him than watching his YouTube compilation of goals and assists from last season, here you go:

Not much else happening this morning. The draw for the EFL Cup (Capital One Carling Milk Coca-Cola Rumbelows League Cup) took place last night and we’ll be away at Nottingham Forest. It feels like it’s been a long time since we played Forest, and it’ll mean a hook-up with old flame Henri ‘Henry’ Lansbury who plays there now.

Later today we’ll have the draw for the group stages of the Champions League. I have no idea where it’s taking place but it’ll be long, interminable, vaguely stupid in places with some toe-curling interviews with former players who look like they’d rather be anywhere else, and eventually the warm balls will be pulled out and UEFA will rig the draw the way they want.

So, a potentially tricky enough game from one of the big boys, and then who knows what after that. Our ability to make the Champions League difficult in the same way for years is now unrivaled. It would be nice just to get something a little different from Europe this season. Let’s see how it all plays out.

Right, all the latest throughout the day on Arseblog News, we’ll keep you up to date with all the latest Lucas Perez to Arsenal stuff (!), and I’m back tomorrow with an Arsecast and more. Until then.