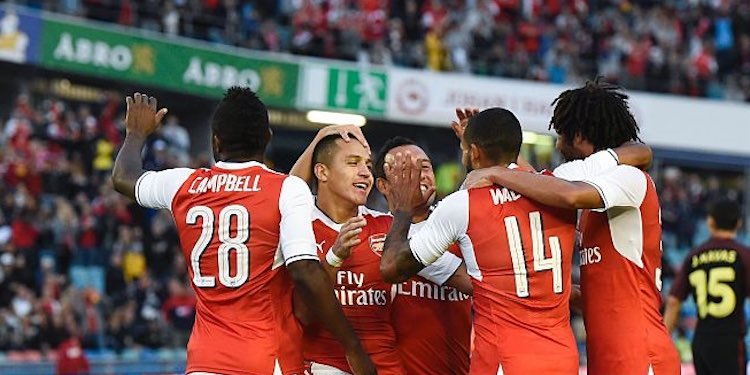 So our final pre-season game of the summer saw us come from behind to beat Man City 3-2, however the win came at something of a cost as late in the game Gabriel picked up what looked like a serious injury, leaving us with something of a central-defensive crisis going into the new season.

The Brazilian, who had endured a difficult day at the office, seemed to catch his studs in the turf in injury time, and lay stricken for some time until he was stretchered off. He was pictured later on crutches with a protective boot but it seems very unlikely that’s he’s going to be fit any time soon.

We have not even made a diagnosis in the medical room with our doctors or physios yet. I can’t tell you more. He’s in pain. Let’s hope the pain is not a sign of bad news. The only thing we have to know now is how big the damage is with his ligament. I think he rolled his ankle.

The late arrival back in England last night means a scan will take place today and we’ll have a better idea how long we’re going to be without him. Having lost Per Mertesacker for months, and with Laurent Koscielny’s late arrival back from the Euros ruling him out of the Premier League opener, we’re now down to Calum Chambers, Rob Holding, or Krystian Bielik as our central defensive options for Liverpool.

All in all, it’s a bit of a shambles. Certainly there was an element of ill-fortune to the Gabriel situation, late in the game, an accident that leaves him banjaxed is one of those things, but you might ask a question as to why our most senior centre-half needed to play the full 90 minutes in the first place. Especially as we’re already so short in that position and it seemed like something of an unnecessary risk.

Aside from that though, it leaves us in a very difficult position, reliant on a central defender the manager didn’t use last season unless he absolutely had to, and a 20 year old who has just signed and for all his promise really needs some time to adjust to a new club and a new level of football. When you consider that we lost Mertesacker on July 23rd, and have been publicly talking about how we’re looking for a replacement, to be here over two weeks later without having a signed anyone is basically negligent.

We knew Koscielny was coming back late, we knew he was going to be given an extended break and a chance to get some pre-season fitness work under his belt, so any injury to Gabriel was going to leave us stranded. Surprise surprise, here we are. I suppose there are two options available to us now:

1 – Buy a centre-half immediately. Pay what it takes to get the man we want. Even then it’s asking a lot for a new player to move clubs, perhaps move country, settle into a new place, deal with a new language, meet new teammates, learn a new system of play and everything else, and then expect him to perform at his best level. This signing should have been made weeks ago, there’s just no excuse for playing with fire like this, and we’ve just been burned.

2 – Bring back Koscielny early. It’s far from ideal and also quite risky, but is it less risky than fielding such an inexperienced duo against Liverpool? It might well be. I mean, we still need to make the signing but this might just allow us to ease the new boy into action and then allow Koscielny’s schedule to be less hectic in the first part of the season.

Of course there are other options, such as playing one of Nacho Monreal or even Mathieu Debuchy at centre-half; and he could use the young duo in there, but we’ve created a big problem for ourselves and it’s not one that can adequately be solved by the famous ‘internal solutions’.

We’ve also made life a bit more tricky when it comes to buying a new player because our need is so pressing. Whatever hand we had in the market has been completely weakened, but this is the bed we’ve made and we’ve got to lie in it. As I was watching the game yesterday evening, I have to say I felt relatively relaxed about the striker situation. I think we still absolutely need one, there’s no question about that, but with Alexis back, Alex Iwobi looking good, Theo Walcott coming on and having an impact, and some good stuff being played up front, we weren’t struggling in any significant way.

However, I was concerned watching us defensively, particularly at centre-half. As I mentioned, Gabriel’s defending for both City goals was poor, Holding looked like a young man of 20 who is finding his feet and I don’t think there’s any need for further analysis of him than that. It’s not right to expect him to be a flawless, commanding central defender and it’s so early in his Arsenal career that he deserves more time before any real judgement can be made. So, it struck me that our need for a signing here was much more urgent than one up top, and that was before Gabriel got knackered.

Now, it’s even more so, and when you look at the age profile of the fit players we have, it’s got to be somebody who can become part of this team in the long-term. We can’t buy a stop-gap player, a body simply to make up bodies. It’s a position in which we really need to invest, because it’s one that’s so important. There’s just no more time for prevarication, we must have targets that we’ve got our eye on and that we’ve scouted. It’s time to make a decision, pay the money, and get him in. No two ways about it.

Between this and the striker search that has proved fruitless to this point, we’ve made an already difficult start to the season even more challenging. The squad needs work, and has done throughout the summer. It’s difficult to say our preparation has been even close to ideal, so let’s see how the club react this week. They have to do something, right?

As for the rest of what happened yesterday, I thought we played some nice stuff from an attacking point of view. We squandered lots of first half chances and went behind to their first opportunity – oh how I have missed you Arsenal. But in the second period we got on top. After the manager said he wasn’t going to play Walcott on the right he did just that and the England man had a real impact. He got an assist for Iwobi’s equaliser, and scored a lovely goal himself.

Chuba Akpom’s 900th goal of pre-season made it 3-1 and there were things to be positive about there. Defensively though, there were also things to be concerned about. I’ve already mentioned the centre-halves, and we seemed to lose our midfield shape so badly in the second period I’m wondering if it was actually a training exercise.

Mohamed Elneny would pick the ball up off the centre-halves, with nobody anywhere near him. All the other Arsenal players were deep into opposition territory, and to his credit the Egyptian’s distribution was really good. Maybe it was something they were working on but I think I’d prefer to see us a little more compact, with more options available to the deepest lying midfielder.

Ultimately though, this was a training/fitness exercise and the result is basically meaningless. We can be happy we won, but when it comes right down to it it was a game which has raised more questions than it’s answered.

James and I will be here with an Arsecast Extra for you this morning. If you have questions or topics for discussion, please send to @gunnerblog and @arseblog with the hashtag #arsecastextra. We’ll have that for you around lunchtime.