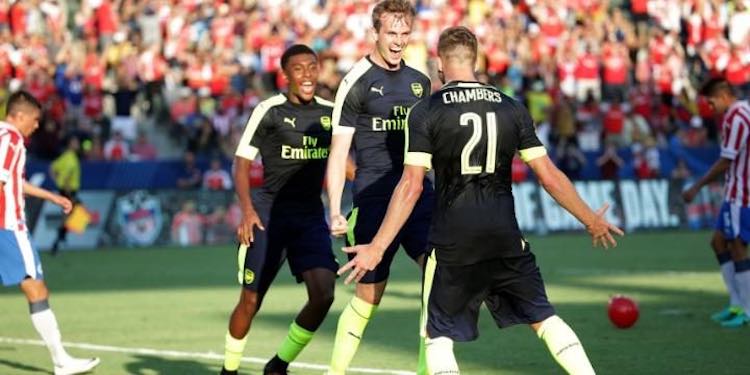 Morning all. The season draws ever closer and there’s some definite angst in the air. I have to say I’m worried by the defensive situation far more than the attacking one. However, I covered that in detail yesterday, and we discussed it at length on the Arsecast Extra this week, so for the sake of balance and my own sanity I’m going to try and look at it from a different perspective.

Just to make things clear: I still think a defensive signing is urgently required, and I think it should have happened before now, so don’t take it that I’m making excuses or anything. I just think the squad we have right now is almost certainly the one that we’ll have to use to face Liverpool, so I’m trying to deal with that reality.

It’s not as if we have no centre-halves

Sure, we don’t have the hugely experienced Per Mertesacker or Gabriel through injury. That’s a big blow. However, we do have Calum Chambers and Rob Holding. We also have Laurent Koscielny and while throwing him back into first team action isn’t ideal in any way, it’s not an impossibility.

Footballers these days don’t go off on holidays and get fat eating pies and drinking pints. It’s a risk to use him, but perhaps less risky than using a very raw partnership like the two young Englishmen. There’s also the possibility that he could play Chambers with Nacho Monreal and use Kieran Gibbs at left-back. Again, not ideal, but certainly a solution if he didn’t want to take the chance with Koscielny.

The pegs aren’t as round as we’d like for the round holes, but they’re not completely square either. We also have a hugely experienced, world class goalkeeper who can play a part in making sure that we remain organised and aware of potential danger.

We can offer them serious midfield protection

What would make me feel especially terrified of having to field inexperienced central defenders is if we couldn’t afford them the right amount of midfield protection. When we can play an axis of Granit Xhaka and Mohamed Elneny ahead of them it makes me feel better. We also have the defensively minded Francis Coquelin if we want, assuming he sits deep and doesn’t start Flamining around the pitch.

I suspect we might see the box-to-box energy of Aaron Ramsey playing in the Ozil role which will see him in deeper positions than the German would usually be in. And in the wide areas I’m assuming we’re going to have Alex Iwobi on the left and one of Joel Campbell or Alex Oxlade-Chamberlain on the right.

I’d be inclined to go with Campbell for his greater defensive awareness and work-rate, so between what we have in the centre and the wide players who will not shirk their responsibilities, perhaps we can offset the weakness we’ve got at the centre of our defence.

We have an offensive threat too

Yes, we all know we need a striker, but I think we’re in a healthier position up front than we are at the back. I reckon Alexis Sanchez – just the 42 goals in his last two seasons – will get the nod up front. I know he’s rarely been used as a striker but then that was also true of Robin van Persie until Arsene Wenger insisted this was his position. There’s a learning curve, but the Chilean is tenacious, clever, and can finish.

Iwobi scores goals, Campbell can, Alex Oxlade-Chamberlain has looked good in pre-season but obviously needs to carry that into games that matter, while for all the frustration about Theo Walcott he could do what he did against Man City and have one of those games where he looks like a genuinely top class forward. I know he could do just the opposite, but get your own damn straw, I’m clutching at this one.

I just think that we’ve got players who can contribute at the end of the pitch and while a signing here is vital for the season ahead, it’s not like we’re having to play Chris Whyte up front (ask your dad).

The defensive situation is a genuine worry, and it’s one that should not have been allowed to develop the way it has. However, we do have good full backs, a central midfield that looks as strong as it has in many seasons, and players who can get us goals. It might well be a match that’s more open than we’d like, but it’s not a foregone conclusion by any means.

Meanwhile, there have been some extracts from a new book to which Arsene Wenger has contributed. He admitted he’s ‘scared’ of the prospect of retirement – something that should come as no surprise to anyone who understands that Arsenal and football is such a huge part of his life – he’s also spoken about how he feels managers should use the money that’s available to them at their clubs:

I personally believe the only way to be a manager is to spend the club’s money as if it were your own, because if you don’t do that you’re susceptible to too many mistakes. You make big decisions and I believe you have to act like it’s your own money, like you’re the owner of the club and you can identify completely with the club.

Because if you don’t do that I think you cannot go far.

I guess it’s illustrative of the way he thinks, having come through a difficult financial period with Arsenal, that he has a big responsibility to use the money in the best way he can. I don’t think that he’s being miserly, it’s that he genuinely feels responsibility. In many ways that’s an admirable trait to have, rather than some fly-by-night manager who might come in, spend recklessly and thus affect the club’s short and medium future if it doesn’t go well.

Arsenal can afford a lot and can justify a lot. We’re not scraping down the back of the sofa for 20p coins. But leopards and spots and all that. Let’s see what he does between now and the end of the window.

Finally for today, check out this week’s Arsecast Extra in which James and I discuss the defensive situation, the injury to Gabriel, a potential starting XI against Liverpool on Sunday, and lots more. And if you listen on iTunes, if you wanted to leave a rating/review that would be greatly appreciated.

Right, that’s that. More from me tomorrow as the season looms even closer.