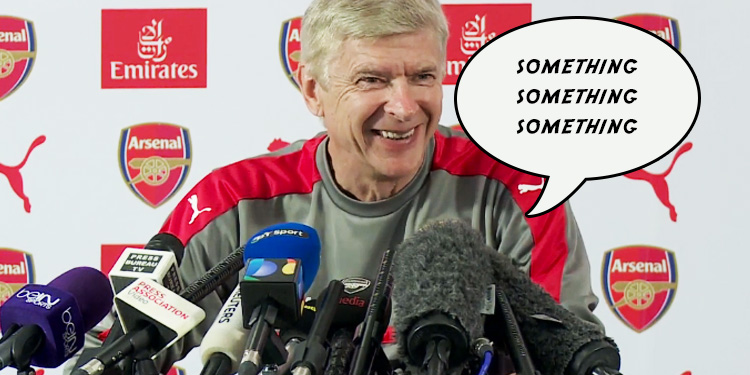 Happy Saturday to you. Let’s have a bang through all the bits and pieces that happened yesterday.

The manager’s first press conference of the season took place and as expected he was asked about potential transfers. He refused to give anything away about Shkodran Mustafi, and spoke more generally. Asked how many players he was looking to bring in, he said:

I don’t count in numbers because otherwise our squad will be too big. Like many teams, if we find the top quality then we will still strengthen our squad.

His comment about how he’s not looking at any specific area other than defender gave people some pause, but my reading of that was that he was basically saying they’re prepared to bring in anybody in any position if they can find the right player. There’s a little audio clip below to give you a taste of that.

Of course we’ve been hearing those lines about how we’re ready to spend, how we’re open for business, how we’re on the market, how we work day and night, how we’ll be the first to know if anything happens, for quite some time now, and we nearly always go into a season short in an areas everybody knows we’re short.

We have done what we wanted and we want to do more.

And to be fair that message has been consistent throughout the summer. The need for reinforcement at the back is far too great to ignore, and if we go into another season without having signed a forward or a striker who can get us the goals we know we need, then you’d have to say that the transfer window will have been a failure. Arsene Wenger is a man with lots of faith in the players he has, sometimes that’s misplaced or even indulgent, and it definitely impacts how he spends money.

When he feels a player will 100% give the team something better, he’ll do it. I think we’ve seen that with signings like Cech, Ozil, Alexis, Xhaka and even if you go back to someone like Bacary Sagna you can see evidence of it. At the time nobody really thought we needed a new right-back – certainly not ahead of other areas in the team – but he saw the Frenchman, rightly, as superior to Eboue and Justin Hoyte and the business got done.

The flip-side of that though is that if he harbours any doubt at all about the ability of a potential signing to improve his team, he generally eschews the deal. I really don’t think it’s a money thing, I think he’s prepared to spend, but within the confines of what he considers the player’s ability as a footballer. I also think that makes our squad less competitive than it should be, so some players are allowed to coast and never quite reach the potential he thinks they have.

New signings help a team in very obvious ways. If you bring in a world class central midfielder, he improves the engine room of your team. But there can also be more subtle benefits, where perhaps a good player in something of a comfort zone is shaken out of that by the competition and becomes a better player himself. And if he doesn’t, if he’s not up for the fight or doesn’t have the character/ability to do that, a decision to let him go elsewhere becomes much easier.

Anyway, when it comes right down to it what Arsene Wenger says about transfers should be of no surprise to anyone at this point in time. If it feels like we’ve heard it all before, it’s because we’ve heard it all before. The proof of this particular pudding will be obvious by August 31st. Let’s hope it’s a delicious pudding filled with a sweet, sweet striker and a melt-in-the-mouth central defender, and it’s not a scabby old pie crust with a pair of roasted tramp’s socks inside.

In terms of what he might do tomorrow regarding the centre of the defence, he ruled out Laurent Koscielny (not unexpectedly) and seemed to hint that he was prepared to play new boy Rob Holding. It would be quite a risk to do that, but if that’s what it is, let’s hope the new lad does well. The pressure on this team to get a result on Sunday is enormous, and if they don’t I suspect the reaction won’t be particularly understanding, which would make for quite some debut for him.

But, while it is hard to look at tomorrow’s game without donning the worst case scenario glasses, we do have lots of good players and a strong midfield which will hopefully offer added protection to the centre of the defence if it is as inexperienced and raw as it looks like it’s going to be. Obviously we’ll have a full preview of the game in tomorrow’s blog.

The manager was also asked about the contract situation of Alexis and Mesut Ozil, and he didn’t sound that worried, saying:

We keep that internally, we make progress always, but it’s not always a quick progress. They still have two years contract. There’s no urgency, or no reason for Arsenal fans to be concerned. At the moment we have priorities that are a bit different. Most of the time contract extensions are done outside the transfer window as it gives you more time concentrate on that.

And he sound a warning to Theo Walcott, Alex Oxlade-Chamberlain and Jack Wilshere over their fitness issues, saying they all have a point to prove this season. Impossible to argue with, because they really, really do.

For some extra reading this morning, you can check out the traditional season preview post here, in which I assess the state of the squad and its chances as things stand right now. And if you haven’t already, there’s a bumper first Arsecast of the new season which you can listen to/download below.

Finally, on the podcast we’re doing a one-day Fantasy Football thing with FanDuel – you can sign up via their website or download the apps for Android or iOS. You can play for free, but if you play with money you can win much bigger prizes. If you do wanna play, enter the promocode ARSEBLOG and Fanduel will refund your entry if you lose, up to £10. The contests I’ve entered this week are the £15k Fan Favourite and the £2k Opening Day Special. There are a limited number of entries for each contest, but lots of chances to win money, so if you’re any good at Fantasy Football (unlike me), you stand a good chance of pocketing some cash.

Note: This is UK ONLY for the moment.

Right, that’s it for now. The first games of the new season take place today and obviously we’re up tomorrow. Have a good one.