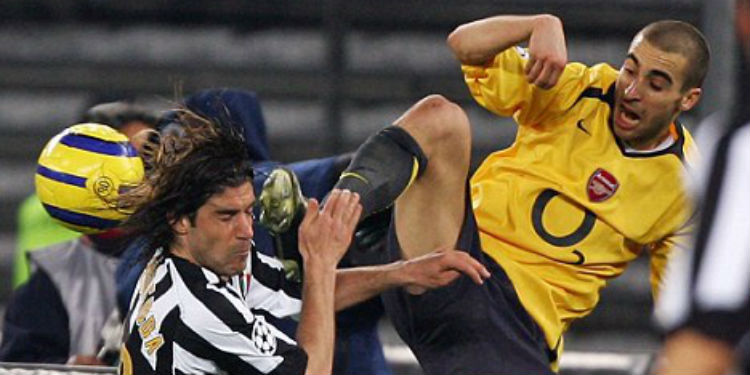 We’ll start with a brief recap in case you’ve not been around for a couple of days.

Blogs is still sunning himself somewhere in Spain, hankie on his head, mojito in one hand and a full leg of Jamon Iberico in the other. He may even be wearing budgie smugglers. Who knows? We can but speculate.

Tom bravely took up the mantle of writing the blog for a couple of days until the rigours of nappy-changing his new-born son, combined with holding down a proper job, got a bit too much.

So, in the midst of an Arseblog injury crisis, you’re left with me…other Andrew, more typically of Arseblog News.

I feel a bit like Mathieu Flamini when he had to play left-back in the run to the 2006 Champions League final – out of position, out of my depth, but enthusiastic nonetheless.

Anyway, before we get to the nitty-gritty, I feel I should mention how  “fuckin’ excellent” it is to be given the chance to ramble on here for a few days. I stumbled across this site 14 years ago when I was at university and, like many of you, I’ve been gorging on the daily updates ever since.

Last night I racked my brains trying to remember how I first came across Arseblog. I know I was using a dial-up connection back then. I know Twitter and Facebook didn’t exist. And I know Google was barely a thing.

I came to the conclusion that I probably ‘Asked Jeeves’ for a blog about arses…and that it might be the only time it ever delivered an accurate search result.

Right, to Arsenal matters. Last night France beat Germany 2-0 to secure a place in Sunday’s final of EURO 2016. A sad night for Mesut Ozil, who delivered a suitably tidy performance, but a memorable one for Laurent Koscielny and Olivier Giroud.

Lolo in particular, was eye-catching at the back for Les Bleus, marshalling his defence and helping out the inexperienced Samuel Umtiti whenever needed. Giroud’s lack of pace killed his one chance – enough to send Twitter wild – but it was interesting to see him get a standing ovation when he was subbed late on. He’s certainly won over a lot of his countrymen.

After the game, Giroud said: “It’s been a while since we beat that team [Germany] in a big match. We’re very tired but very happy tonight. We’re going to enjoy this and then concentrate on the final on Sunday.

“I’d like to write a chapter in history and achieve something great on Sunday. We hope there will be a great ending to this tournament, we can’t stop now.”

Antoine Griezmann was the hero for the home side netting a decisive brace either side of half time. Having missed a penalty in the Champions League final in May, the Atletico Madrid man showed balls of steel to slot home from 12-yards after Bastien Schweinsteiger was harshly adjudged to have handled in the area in first half stoppage time. Griezmann, who cut a silky presence all night, then delivered the knockout blow with 18 minutes remaining, pouncing on Manuel Neuer’s flap to prod home.

The Stade Velodrome in Marseille and the fan park in the shadow of the Eiffel Tower erupted – quite a moment for a country who’ve been crying out for something to cheer since the terrorist attacks back in November.

Given Ronaldo plays for Portugal it’s fair to say that all Arsenal fans, Portuguese ones aside, will likely be cheering Didier Deschamps’ side on Sunday.

Elsewhere, three Arsenal fixtures – the first two games against Liverpool, Leicester and the September showdown with Chelsea – have been selected for broadcast by Sky Sports and BT Sports. You can get the details on Arseblog News.

There was also a spurious rumour, stemming from L’Equipe, linking us with Lille defender Djibril Sidibe. At this stage I’m a little sceptical, it sounds like an opportunistic agent is working his magic.

Anyway, that’s your lot. If anything happens today we’ll cover it over on Arseblog News.