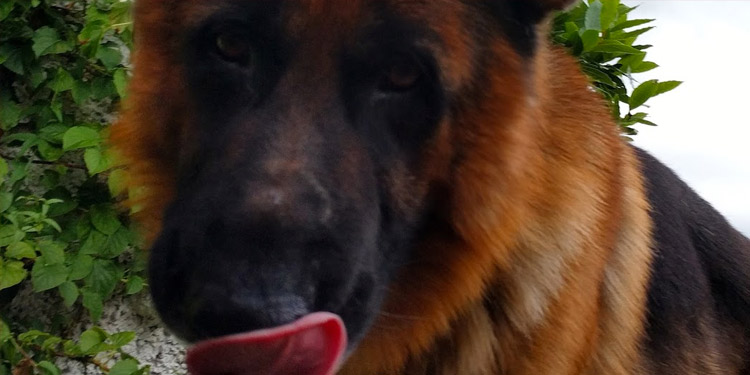 I have a really clean elbow. It’s probably the cleanest it’s been in years. Not out of any plan or decision to make my elbow gleaming, I should point out. I rarely, if ever, think about my elbows. They’re just there. Sure, they’re very handy. A useful arm-hinge that enables us to do all kind of things.

I suppose we take them for granted. Imagine your arms without elbows right now. We’d be a quite frightening, awkward species, and eating and drinking would be remarkably difficult. So hurrah for elbows. However, I’m not talking this morning about the usefulness of them, but the fact my right one is glistening and unblemished. I did not set out to make it this way, it just happened.

Now, if you’re sitting there this morning reading this, jealous of the fact I have a spotless elbow, here’s my advice: get a German Shepherd. I cannot make any guarantees that your one will perform this task, but mine did. He got on the bed this morning and decided that my elbow had to be licked until it was an elbow that could be entered into galas and/or extravaganzas. Like if they had Crufts for elbows mine would now be ‘Best in show’.

I suppose the issue I have is that my left elbow was not given such a thorough tonguing and by comparison probably lacks something. I’m not going to look, because if it’s hugely noticeable then I’d probably get a complex, and I have enough issues as it is without having to worry about my elbow.

Like, why is there a patch on my shin that never gets wet when I have a shower? I could be in there for ages, but this one particular bit about midway down my shin stays as dry as dry can be. I’ve tried to figure it out, but I can see no reason why this would happen other than someone covered it with a kind of water-resistant lacquer in the past. A bit like Achilles but, you know, without the super strength and the ability to turn into a bat.

Then there’s my new scar. I have a massive surgical scar down my left arm. I remember getting this because I broke my arm like a twig some years ago in a car crash and the doctor, after four months of being in a cast, told me ‘Hey, I don’t think this is healing.’

‘Thank goodness you spent years in medical school,’ I might have said, ‘because I’ve been telling you that for ages’. Anyway, he gave me drugs to make me sleep, sliced open my arm with a cleaver of some kind, and stuck a metal plate in my arm to keep it all together. You remember that kind of stuff.

Recently though, I’ve noticed a brand new scar just above it. Except it looks like an old scar. Not old old, but one that’s been there for some years. It’s about 2 inches long, raised, and I have no idea how it happened. It just seemed to appear on my arm. I had no cuts, scrapes or abrasions. Nobody stabbed or sliced me. There was no wound to scab over or for me then to pick at.

But it’s the kind of scar that requires that kind of stuff to happen in the first place, so how did it get on my arm if it didn’t? Can they emerge from deep within? Is it like the Exorcist when words appear on her belly and this is just the start? It’s like an I or an L, I suppose. What’s the message?

It’s quite worrying. What if more of them start appearing on me in random places? I have enough scars as it is. Like when Shane Clarke hit me in the chin with a golf club in County Louth. That bled a lot, but at least I knew it had happened. I don’t like the idea of secret, surreptitious blemishes appearing on me out of nowhere. Now, I’m not saying I’m likely to experience Stigmata or anything, but I am a bit concerned by the situation.

Also, for the record, I don’t want to be a test case, so if scientists who have spent their lives investigating randomly appearing scars are reading this, please leave me be. I will not respond to your entreaties to spend time in your laboratory so you can poke and prod at me like a piece of meat. Find someone else to fulfil your life’s work. It will not be me.

In conclusion: Jonny Evans? Fuck off.