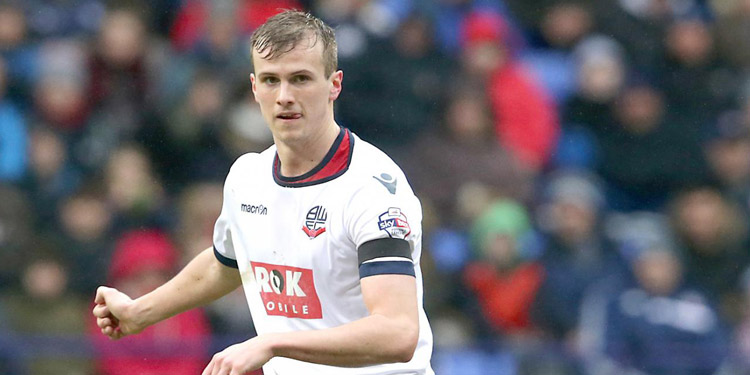 Morning, I’m gonna have to fly through this one because rather inconveniently the people who are in charge of electricity are cutting it off on our road shortly. Apparently this is for ‘essential maintenance’ but they’re not fooling me. It’s just so they can give me a pain in my hoop.

Let’s start today with news of a signing that appears imminent. That’s right, it looks like we’re going to buy a player. 20 year old central defender Rob Holding, Bolton’s Player of the Season last year, has apparently undergone a medical after a fee was agreed between the two clubs.

We had bid initially in May but that one was rejected. This is obviously a deal of such complexity that it’s taken two months to add £1m to our first offer, and with Bolton utterly cash-strapped they’ve decided to accept. Having never seen Holding play I can offer no insight into him as a player, but he’s an England U21 international and quite highly rated. Beyond that, it’s hard to say much more.

However, you would think that if we’re signing a 20 year old defender with just 30 Championship appearances in a relegation season under his belt, he’s unlikely to be someone who will immediately be pressed into first team action. You might also wonder what it might mean for Calum Chambers, ostensibly filling that fourth choice centre-half role as it stands. There’s no room for him to move into midfield, where he’s been tipped to play in the past, and if Holding can provide back up at right-back it would lend some credibility to the stories that the former Southampton man might spend the season out on loan somewhere.

If Holding is a significant upgrade on Chambers then fair enough, but it’s a bit of a shame that it hasn’t quite worked out for him. Like most of you I enjoyed his early Arsenal performances but he’s struggled to convince the manager as much as anything else. I thought when he played last season he did pretty well overall, and there was a measure of reliability and consistency to the way he performed. I guess we’ll see soon enough.

As for Holding, if he’s the central defender then it’s certainly a gamble from the manager. We know he likes to unearth a gem but it feels like it’s asking a lot of a young player to come in and adjust to a higher level and the enormous demands and pressures of being an Arsenal player right now. Perhaps things will become clearer over the next few days, and I’m more than willing to judge a player on his performances ahead of his price-tag, but centre-half is one of those positions where experience really counts and with a big season ahead it’s a risk to sign someone who isn’t exactly established. Let’s see how this goes.

Meanwhile, staying sort of in the realm of transfers, Olivier Giroud’s agent has confirmed what we already know about a potential swap deal involving him and Gonzalo Higuain – that it’s complete bollocks. As I wrote the other day, we need to add to our squad, and unless you think there’s any chance Arsene Wenger is going to go out and buy two strikers, then keeping Giroud is a no-brainer.

Let’s face it, we’re already worried enough that we won’t sign one, so the idea of him bringing in twice that amount seems ludicrous. The striker search is obvious though, even Giroud’s agent talks about it when he was asked if his client was happy to stay if Arsenal did sign someone else for that position:

Yes, you always need two strikers. Welbeck is out for nine months unfortunately. And it’s quite normal that if you play in a great team you should face strong competition.

So let’s hope that’s exactly what he gets. It doesn’t look like it’ll be Mauro Icardi, surprise surprise, as all this chatter is simply to get him a better deal at Inter. Higuain is still floating about with stories that Juventus won’t pay the release clause, and as much as I’d like the Argentine at Arsenal, I can understand that. It’s a massive amount for a player who will be 29 in December. I could just about see Arsene Wenger do it if he could get 5 or 6 peak years out of a player, not 2 or maybe 3.

After that I’m as stumped as you are in terms of the forward, or forwards, we might bring in. As we discussed on the Arsecast Extra yesterday though, our very real interest in Jamie Vardy and Henrikh Mkhitaryan (even if those deals didn’t come off for various reasons), at least shows that we’re aware we need players in these positions. It’s small comfort though, because as we’ve seen in the past Arsene isn’t always likely to take second best when he can’t get his transfer porridge just right, but it’s something at least.

As we wait to see what happens, Joel Campbell says he’s not interested in a move away, and instead wants to improve on what he did last season:

There are always rumours, but I don’t talk about those things. I focus on doing my thing, which is to train day to day, to fight and to try to give my best. I have had a good holiday and now I am happy to train, to return strong, to prepare myself well in this preseason for the new campaign for which I have high expectations and I will fight with everything to have the opportunity to play and to show what I can give.

I like his attitude, I have to say, on the pitch and off it. It’s clear that Arsene Wenger doesn’t really see him as much more than squad fodder, expendable at times too, but every time he plays he gives 100% and works really hard for the team. Last season he was one of those who could hold his head high, and while I’m very much of the opinion that we need better if we really want to compete next season, he’d still be a very handy player to have around.

Beyond the news that Wellington Silva has officially been given the boot (sorry, had to ), that’s just about that for this morning. Finally though, a reminder to listen to this week’s Arsecast Extra in which James and I ponder the lack of transfer activity to this point and whether or not it’s time to get worried. We also discuss the contract situations of many players at the club, including Mesut Ozil and Alexis Sanchez who have still to put pen to paper – and at this point we question if they’re going to. It’s a fun listen, check it out below!

Righto, all the news throughout the day will be over on Arseblog News. I’ll have more here tomorrow, until then.