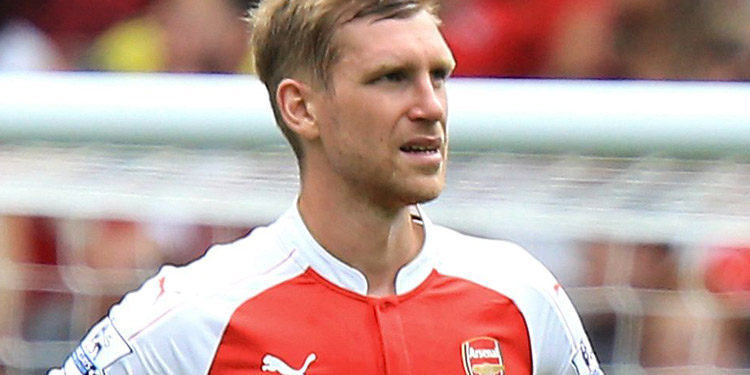 So, the rumours about Per Mertesacker turned out to be true. The manager gave a little more info on the situation at a press conference last night, and it’s bad news for him and for us. It seems he ended the game against Lens with some pain in his knee and such is the severity of it he’s already had an operation in Germany. Speaking last night, the boss said:

We have bad news on Per Mertesacker. He played in Lens on Friday night, he finished the game and had a little pain on his knee. We found out the next day that it was much more serious than expected. He had surgery yesterday in Germany. It all went well. I know you will ask me for how long he will be out. I don’t know that, it’s months, but I don’t know how long he will be out for.

That sounds like a cruciate ligament injury, although that’s yet to be confirmed. If it is, that might well be a season ender, as typically they take about 6-9 months to recover from, and then you’re looking at some time to get yourself ready and match fit again. In the case of Mertesacker, in the final year of his contract, it might mean a premature end to his Arsenal career which would be a real shame. Let’s hope it’s not that bad.

What the manager does about the situation now is the key issue. If you count Gabriel, Koscielny, Chambers and Holding, you could say that we’re not necessarily short on numbers, but it seems even more obvious now that we need to sign an established central defender. Arsene Wenger has said as much, with little doubt about his intentions:

We have to look for an option to get a bit more experience. We will see some of our young centre backs on Thursday as well. With Per being out, we are a bit short on the experience front and we are looking to bring somebody in.

So far this summer we’ve been linked with Napoli’s Kalidou Koulibaly, and yesterday there was talk of German international Shkodran Mustafi, currently playing for Valencia. No doubt more names will be added to that list as the season grows closer because our need for a centre-half is now as pressing as our need for a striker. Let’s see what happens on that front. I suppose if there is something to read into Wenger’s words, it’s that he says ‘We are looking’, which suggests at least a decision has been made. There’s no prevarication, no ‘maybes’ or ‘perhaps’, it’s present tense, the search is on.

The boss was also asked about the news that emerged yesterday in which Lyon, rather oddly it has to be said, released a statement which revealed they’d turned down an Arsenal bid for striker Alexandre Lacazette. Apparently – this is according to Sky anyway – the bid was made earlier in the summer, before West Ham had a larger bid rejected themselves, so it’s curious as to why the Ligue 1 club have made this public now.

Perhaps they’re looking to start a bit of an auction for him. Asked about it last night, Wenger said:

Lyon is responsible for their own statements. On the transfer front, I think the best [option] is always to keep as secret as possible. If we sign somebody, we will announce it. But I cannot tell you much more on that.

Which is about the least surprising thing he has ever said. We know that he absolutely craves secrecy when it comes to transfers, and isn’t always happy when things become public. However, it’s more and more difficult to keep things under wraps these days, with social media channels etc. Look at the Takuma Asano news, broken by a Japanese journalist before anybody had even heard of the player himself.

A club releasing a statement like that is another thing entirely though. Are they trying to force our hand into making a bigger bid? Wenger and Lyon President Jean-Michel Aulas know each other well, so I don’t think it’s anything personal, but they have been a club who have worked the transfer market very well down the years when it comes to selling players. Their statement calls Lacazette ‘irreplaceable’, but the reality is they have a valuation of him that hasn’t yet been met.

As soon as it is, I predict he’ll become quite replaceable indeed. It’s just whether or not we’re the club that will do that. Obviously the clock is ticking, so the ball is very much in our court. Lacazette is not the huge upgrade at centre-forward we’ve all been craving, but if he were to arrive along with Riyad Mahrez – about whom there are more whispers this morning – then it would certainly strengthen our offensive options.

The team will continue the pre-season work in the US today, with the manager keen to see how his young central defenders can develop, and with Chuba Akpom saying he’s prepared to play in the wide areas if it means he gets more game time for Arsenal. Chances are, assuming reinforcements arrive, he’ll go out on loan again to develop further by playing more regularly than he would with us.

Oh, and as the transfer rumours hot up, put them in perspective with our brand new Poo-o-Meter over on Arseblog News. It’ll keep you [somewhat] sane. Ish.

Right, that’s your lot for this morning, till tomorrow.