With Euro 2016 confined to the attic, Arsenal fans can pool their collective energy into freaking out about the transfer market. (WE’RE SIGNING A STRIKER AREN’T WE?! SOMEONE GENTLY STROKE MY HAIR AND TELL ME WE’RE SIGNING A STRIKER!) Arsene Wenger has plenty of twisting to do on his transfer Rubik’s cube, not least in determining who Arsenal’s second choice goalkeeper will be next season, assuming he isn’t ready to consign Petr Cech to the big near post in the sky just yet.

Wojciech Szczesny’s loan spell with Roma is at an end and the Italian club have purchased Brazil’s first choice goalkeeper Alisson Becker from Internacional. David Ospina flung himself full length into the shop window with a series of impressive performances at this summer’s Copa América. It is very difficult to choose between Szczesny and Ospina as goalkeepers. They seem to possess equal and opposite strengths and flaws.

It is entirely probable that both will want to leave the club in pursuit of a guaranteed number 1 berth elsewhere. However, this article will continue on the premise that Szczesny and Ospina are willingly engaged in a winner takes it all Royal Rumble for a single squad space. The question might not be so much who is the better goalkeeper, but who is the better goalkeeper for Arsenal’s purposes? Which one immediately makes a better deputy? Which one is most likely to be a suitable first choice in the long term?

It’s a contentious issue amongst Arsenal fans, as this entirely scientific twitter poll I conducted attests. A single question referendum that effectively asks people how much trust they would place in a Polish immigrant. What could go wrong?! 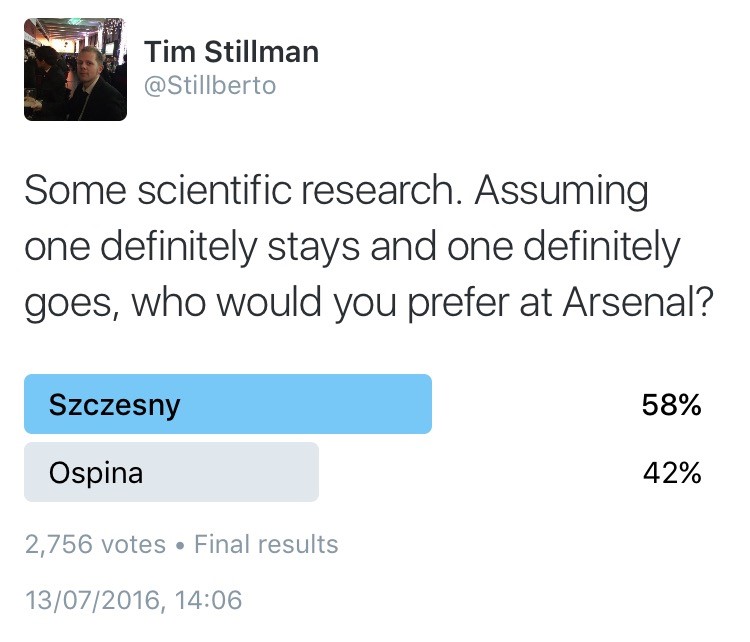 Ospina, like many goalkeepers, needs a run of games to produce his best form. It appears that Arsene promised him some game time in the Champions League group stages last season. After an unconvincing display against Zagreb and a calamitous own goal against Olympiacos, that particular experiment was shelved. But the Colombian looked much better when afforded an extended run by injury to Petr Cech in the spring, even keeping the Czech out of the starting line-up for a couple of games once he had returned to fitness.

I watch Colombia fairly regularly and Ospina has grown in stature on the international stage over the last two years. His Copa América performances this summer were outstanding and he was unfortunate to lose out to club mate Alexis Sánchez for the player of the tournament award. Last summer, he performed incredibly well in the Copa América in Chile- this double save from Lionel Messi was genuinely breath taking.

Ospina has a lot of status in a Colombia shirt, he is the vice-captain to brother-in-law James Rodriguez. Senior pros like Mario Yepes, Teofilo Gutierrez, Camilo Zuniga and Falcao have gradually been cast aside by José Peckerman and Ospina has become a senior statesman for Los Cafeteros. He has thrived on the responsibility with a series of impressive performances for his country in the CONMEBOL World Cup qualifiers.

Yet South American football does not tend to expose one of Ospina’s key weaknesses as readily. He is not authoritative coming off of his line and relieving pressure from his defence. I would venture that this is one of Wojciech Szczesny’s great strengths. Compare and contrast Szczesny’s performance at Upton Park in December 2014 when confronted with Andy Carroll with Ospina against the same opponent in April this year. Likewise, in the 2015 F.A. Cup Final, Christian Benteke’s attributes were neutralised by Szczesny’s willingness to leave his line and claim the ball.

So much depends on Arsenal’s defensive setup and the style of the opponent. If Arsenal are likely to face a barrage of high balls into the area, or else if they intend to play a high defensive line, Szczesny is more suited to this style. If you’re playing with a fairly low block, with the defensive line closer to the 18 yard area, Ospina looks the superior ‘keeper. Like most goalies that are brave enough to leave their line, Szczesny’s errors are usually spectacular.

David Seaman was very much a ‘front foot’ goalkeeper too. He was punished for this occasionally during his career- mere mention of the names Nayim and Ronaldinho will haunt him to his grave. But mathematically speaking, Seaman will have prevented the concession of dozens of goals by considering the whole 18 yard box as his domain. Ospina, I think, is guilty of only minding his 6 yard box. That said, Szczesny’s decision making is a long way from comparability to David Seaman.

At Szczesny’s age, Seaman had just joined Queens Park Rangers. He was something of a late developer as he honed his decision making skills. At age 25, Seaman also began working with Bob Wilson, another goalie happy to leave the sanctity of his goal line. It’s difficult to say with any authority that goalkeeping coaching is an issue at Arsenal, but there are audible whispers that suggest this is the case. Perhaps Petr Cech possesses the qualities to become a training ground mentor.

Ospina turns 28 in August, whilst Szczesny has just turned 26 years old. Both are experienced, but, in goalkeeping terms, neither has reached peak age. Szczesny’s comparative youth and years already served at the club suggest he may be a more suitable mentee. The Pole clearly holds a lot of affection for the Gunners, having joined Arsenal aged 16. At present, I would venture that Ospina is more fully formed and closer to being a reputable number 1. However, I’ve the impression that Szczesny has a higher ceiling in terms of potential.

The questions inside the club seem to revolve more around Szczesny’s attitude than his ability. I don’t think Szczesny is as conceited as many seem to think. In his interviews, he comes across as self-deprecating and critical of his own performance. The question is whether he can eliminate that self-destructive streak. Ospina is certainly a less flaky individual, more capable of providing a calming influence on defensive colleagues. 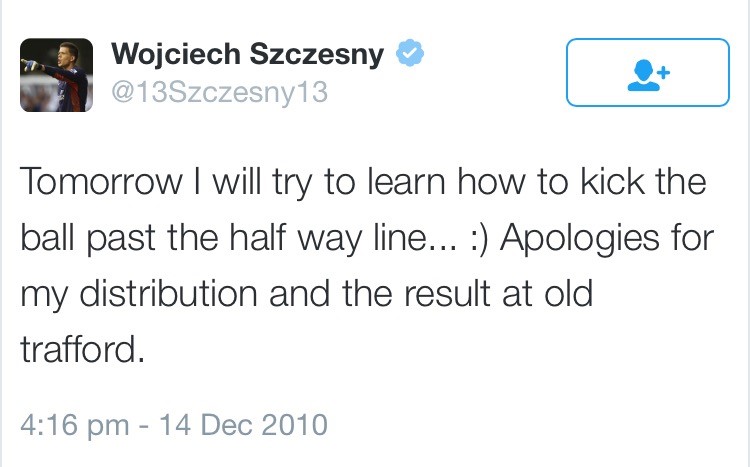 Szczesny’s kicking is superior to Ospina’s- in terms of length, height and accuracy. Ospina enjoyed a 57.5% passing accuracy in the 2014-15 season. (Last season, his 4 PL appearances yielded a 56.4% accuracy rate). Szczesny scored 62.3% in the same campaign for Arsenal and improved on that during his season on loan at Roma, where he reached a teammate 66.9% of the time. (All stats via whoscored.com).

If Olivier Giroud is Arsenal’s first choice striker, the Pole provides a more reliable supply line. Giroud is often used as a release valve when Arsenal’s defence is under pressure. With Ospina in goal, the Frenchman needs to drop into his own half to latch onto the Colombian’s short kicks. Szczesny is able to reach Giroud much higher up the pitch, where he can be more effective. This consideration may well be reduced if Arsene is able to purchase the more mobile striker he desires and moves away from Giroud as the de facto choice upfront.

Were gene splicing technology freely available, Szczespina would be quite the goalkeeper. Assuming both do not want to leave this summer, choosing a favourite will be a difficult task for Wenger. The choice would be governed by how he sees the team playing, how the defensive strategy will be set, who is more suited to the role of Cech’s apprentice and who is less likely to blow smoke rings in Steve Bould’s face during training. Either one of Ospina or Szczesny would have good reason to call themselves the best back up goalkeeper in the league. But that is unlikely to be an ambition for either one of these glove butlers.