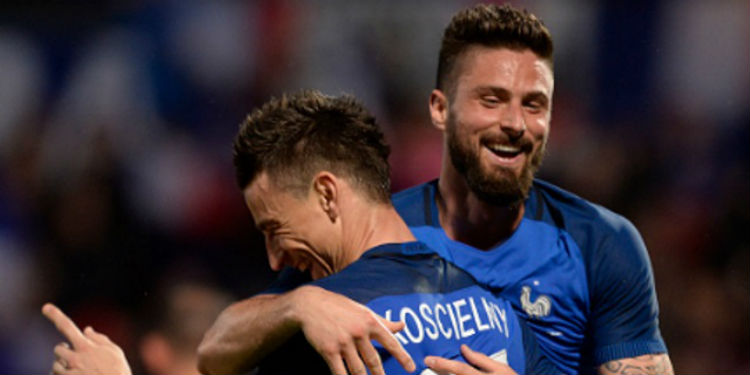 So, after 50 games, EURO 2016 reaches its climax this evening as hosts France take on Portugal at the Stade de France in Paris.

Will Laurent Koscielny and Olivier Giroud emulate the international ‘gloire’ of Patrick Vieira and Emmanuel Petit? You’ll remember the former assisting the latter in the dying stages of the 1998 World Cup final and the famous newspaper ‘Arsenal win the World Cup’ headline it prompted.

I really hope they do it. The pair has embarked on a pretty amazing journey to the top of the game. Just seven years ago they were playing alongside each other for Tours in Ligue 2 – a side whose rickety stadium holds just 16,000. It might not be on the Jamie Vardy scale of sporting fairy-tales, but it’s not far off.

A penny for their thoughts as the Marseillaise gets going this evening. Allez Les Bleus!

Unsurprisingly, transfer speculation appears to be picking up now that the tournament is coming to an end. You may have seen a couple of rumours linking Alexis Sanchez with a move to Juventus; not the type of thing you want to read over your Corn Flakes when you’re already nervous about Arsenal’s hunt for new attacking talent.

Thankfully, Juve’s interest – they went as far as bidding £34 million – has come to nothing.

“Sanchez is a great player, but Arsenal told us they have no intention of selling,” said director Giuseppe Marotta.

He added: “Arsenal said that the Chilean attacker is non-transferable and that he is not on the market.”

You should have added an extra £1 lads.

So Sanchez stays. Phew. But will anybody be joining him? That remains to be seen, but it doesn’t look like being Alexandre Lacazette. Lyon’s 25-year-old striker has been heavily linked with the Gunners in recent months despite his asking price hitting the £42 million mark.

His chairman, Jean-Michal Aulas, has now gone on record stating Arsene Wenger has not made any approach.

“I saw Arsene during France matches and he has not told me [of his interest in Lacazette],” he told L’Equipe.

“I don’t think it’s something and it seems Alex wants to spend this season with Lyon in the new stadium. He wants to know an adventure in the Champions League could be much better than last season. I think he will stay with us and we are very happy.”

Who knows where we’ll turn next. The new season starts in just 36 days.

Before I go, a quick tip of the cap to Gooner Andy Murray who is looking to secure his second Wimbledon title today. He faces Milos Raonic in the final this afternoon. Anybody who goes out of their way to spend time with Robert Pires is a hero in my books.