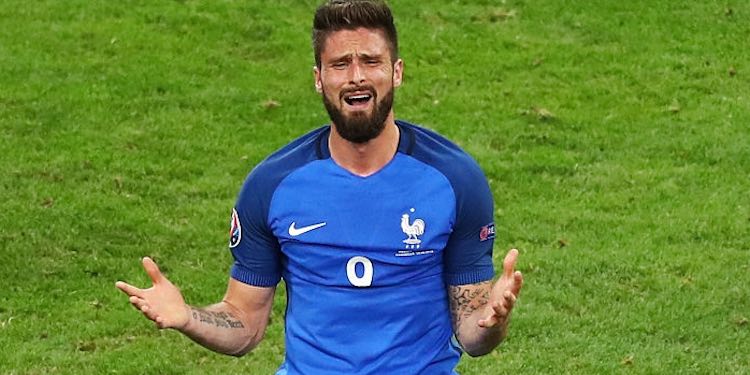 Morning. We had many more hits than usual from Iceland yesterday. It’s good to know that Cristiano Ronaldo can bring us all together in so many different ways. Maybe he is the herovillain the world needs right now.

Let’s begin today with mixed reports from the Euros for the Arsenal men involved. Granit Xhaka played as Switzerland drew 1-1 with Romania. This was my first time really watching him since he joined the club, and I have to say I was impressed.

He’s strong, clever, and his range of passing is fantastic. There was one in the second half where he looked surrounded in midfield but found a man down the left (could have been Ricardo Rodriguez the left back). It wasn’t flashy or showboaty in any way, but just really effective. He completed 95 out of 108 passes, 52 of which were forward. He found a teammate with 11 of his 16 long passes, made 9 ball recoveries and created 3 chances from open play.

It looks to me like he’ll definitely add something to the centre of our midfield. The question is, who is going to play with him? It’s hard to see right now, but obviously the manager has Ramsey, Wilshere, Cazorla, Coquelin and Elneny to choose from, giving him different options and qualities. It would be nice to have a midfield duo that really work well together but I don’t suppose we’ll find that out until the season gets going.

All in all though, I was impressed. There’s a calmness to him that I really like. In midfield that’s a much underrated attribute, so that was good to see. With regards to Rodriguez, quite where our interest in him stands right now I don’t really know, but he also looks a good player, and if Kieran Gibbs is off as the whispers suggest, then he’d be a fine addition. At 23 he’s got plenty of time to develop too.

Elsewhere, it was a good night in the end for France as late goals from Antoine Griezmann and Dmitri Payet gave them a 2-0 win over Albania. It felt harsh on the Albanians who had come so close to frustrating the hosts, but they had been somewhat aided by poor finishing from Olivier Giroud. The Arsenal man had a number of chances from crosses, that forehead of his wasn’t at its best though as he spurned them all.

As the game went on he got closer and closer, and just before he was taken off he hit the bottom of the post with a header. One of those nights for Giroud, and the cheers for Gignac coming on to replace him told their own story. It’s a bit like complaining in a restaurant that your steak is overdone then standing and applauding the chef when he replaces it with a plate full of deep-fried otter guts served with a garnish of mud and pebbles that have been pissed on by a moose with a bladder infection.

Giroud is that player though. Capable of getting you goals, important ones too, but also of having one of those games where you know he could play all night long and not score. Still, the victory means France are the first team to qualify for the knock-out stages. Switzerland need something from their game with them to be sure, while Romania have a chance if they win and the Swiss lose.

Today we’ve got England v Wales which is going to be a very interesting game. Gareth Bale has been giving it a bit in the press about how England lack passion and how none of their players would get in the Welsh team. No doubt a bit tongue in cheek but perfect fodder for the press who asked Jack Wilshere about it and his ‘They don’t like us? Well, we don’t like them!’, reaction was the perfect bit of pre-match ‘My dad is bigger than your dad’ stuff fixtures like this need.

It will be interesting to see how Roy Hodgson’s men react. Maybe Harry Kane will add some extra LIIIIIIIIOOOOOOOOOONNNNNNN to his corners. Arsenal interest in that one comes from Wilshere, perhaps, if he’s selected, and of course Aaron Ramsey who will attempt to backheel nutmeg Dele Alli within 30 seconds of kick-off.

Later Ukraine face Northern Ireland, before Germany v Poland later on, which should be a cracker. There’s no Wojciech Szczesny for the Poles apparently, he picked up an injury in their first game, so it’ll probably mean a start for Lukasz Fabianski.

Finally for today, the fixtures for next season have been released and we’ll begin the new season at home to Liverpool. Maybe it’s just my memory playing tricks on me, but I seem to recall that happening quite a bit in the 70s and 80s. I could be confusing it with Charity Shield showdowns though. An interesting start, no doubt, ahead of what’s going to be a very tough season.

You can see all the fixtures here, and do remember that as yet none of the games have been scheduled for TV. Sky, BT and the Premier League will sit down over the next month and come up with a plan that inconveniences the greatest amount of supporters in the most ludicrous ways possible. They’ll announce those movements in July, so don’t buy any plane tickets or anything just yet.

Betting hasn’t gone so well the last couple of days, but I’m still up, playing with the house’s money. Today’s treble is England v Wales draw, Northern Ireland to beat Ukraine, and Germany to draw with Poland. A bit unlikely, perhaps, but there you go.

If you’re interested, Ladbrokes have a new customer offer today: England 6/1 OR Wales 12/1 to win the game. One per new customer only. Max £10. Stake returned as a free bet if lose.

Right, that’s it. Enjoy the football today. More from me tomorrow, Tim Stillman will be here with his column later on.