Morning all, a quick Sunday round-up for you. Seems to be a bit going on so let’s do it bit by bit. Away from the international tournaments to start with, there looks to have been a bit of an update on the whole Jamie Vardy thing.

We know Arsenal are interested, we know we’ve met Leicester’s release clause, and we’ve been waiting on a decision from the player himself. Arsene Wenger has apparently told Chinese TV that as far as he knows the player is not coming, saying:

Jamie Vardy is at the moment with Leicester, and from what I know he will stay at Leicester.

Watch here. Whether that’s a definitive decision from Vardy I guess we’ll only find out after the Euros – he wouldn’t be drawn on it in an England press conference yesterday – so we’ll have to wait and see.

It might go some way to lending credence to this story in The Guardian about how we’re interested in Lille’s Moroccan international Sofiane Boufal. Apparently Chelsea and Barcelona are interested, there are some interesting quotes from his agent there, but he’s more of a wide man or a number 10 than a striker. Perhaps the reports about Henrikh Mkhitaryan only wanting to join Man Utd are on the money, and I’ve long suspected a wide forward is on our list, so maybe this is it.

It still leaves us in need of adding a striker, so quite what Arsene does about that is anybody’s guess at this stage. It also wouldn’t surprise me in the slightest if, despite what he says in that video, the Vardy thing wasn’t 100% dead but time will tell. Still, it’s nice to have a bit of Arsenal news for a change.

Would the manager have looked at Belgium yesterday and had another think about Lukaku? He scored twice against Ireland as the Belgians ran out comfortable 3-0 winners. It might have been different if football had a rule which did not allow a player to kick an opponent in the head in the penalty area – perhaps adding some kind of punishment which might provide a goalscoring chance – but clearly it does not.

Seconds after Shane Long was kung-fu’d in the noggin, Ireland were behind, Lukaku finishing off what was a very good move. Witsel then scored a header, and woeful defending let Belgium grab a third. It was all too easy, Martin O’Neill discovering after many years in management that it might be useful to have players who can pass the ball to each other instead of lumping it aimlessly downfield. He’s no Jack Charlton.

Later on it was oh-so-close for our Icelandic chums. The tournament of late goals saw them leading until the 87th minute when Hungary forced an unfortunate own goal to make it 1-1. There was still a chance late on from a free kick – but when it rebounded to 67 year old Eidur Gudjohnsen, his shot deflected wide. On that free kick though, is it just me or do the referees not seem that bothered by the walls trampling on and beyond their lovely spray lines? Seen it a few times now.

In the late game, Portugal and Austria played out a 0-0 draw. Nothing of any consequence happened whatsoever. There was no moment to pick this morning that might make us all laugh or anything. Definitely no incident to amuse us in any way, shape or form. I wish there were. I’d love to be able to bring a smile to your faces, but unfortunately nothing like that went down. Well, you know, apart from this: 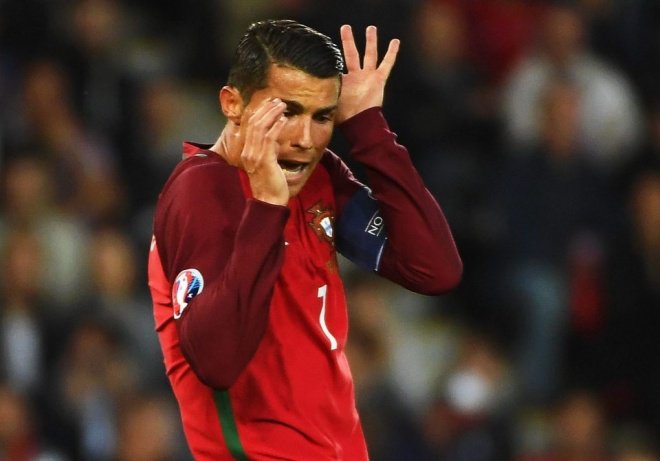 Today at the Euros we’ve got the final games in Group A, both taking place at the same time obviously. It’s Switzerland v France and Albania v Romania. A shifty double on a draw in the first game, and a Romania win in the second is where my money is going today.

Across the Atlantic, Chile smashed Mexico 7-0 (seven) to reach the semi-finals of the Copa America. Alexis scored one, and got an assist, while Eduardo Vargas scored four times. It’s a fairly astonishing result at this stage of a big competition though, and I can only assume Mexico were as bad as Chile were good. That means we’ve got Ospina and Alexis in the semi-finals, and I think they’ll face each other in one of the games, while the other is Argentina v USA. That should be fun.

Right, that’s that for now. Have a great Sunday, I’ll be here tomorrow with more blog waffle and some aural pleasure for you as well with an Arsecast Extra. Until then.