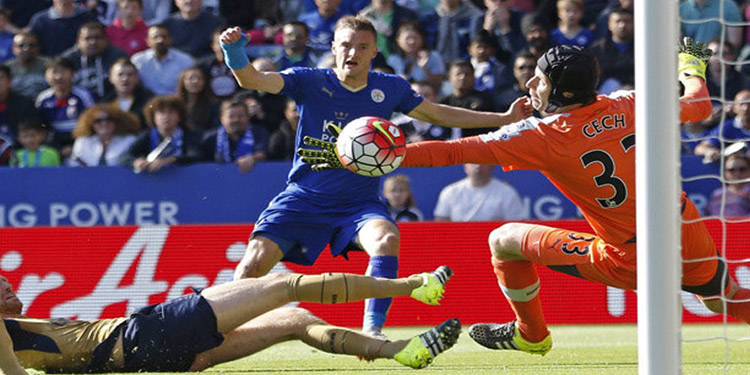 Well, I was expecting this to be a pretty quiet Saturday morning but yesterday evening the Guardian reported that we’d triggered Jamie Vardy’s release clause. Blimey.

Reports suggest it’s around £20m, but it could be a lot more than that with add-ons etc, and it looks as if this this is the striker Arsene Wenger is going to try and sign. Hopefully we offered £20,000,0002, having learned our lesson from the Suarez thing.

It’s one of those stories that challenges you. Firstly, it’s a bit unexpected, because if there was a Leicester player we were after you’d have thought Riyad Mahrez would have been it. And if there was a striker we were going to try and buy, I wouldn’t have had him near the top of the list. Then there’s the fact Vardy is 29, a bit cheaty and a somewhat unpleasant character.

However, he scores goals. And as we know, in football scoring goals is more important than anything else. Being cheaty, racist, raping, drunk drivey, druggy, or just generally evil, all of those things can be conveniently put to one side as long as you’re banging them in. And Vardy banged them in last season, no question about that.

The other thing that might give you pause for thought is the nagging feeling there’s a touch of the Michael Ricketts off him. He was a Bolton striker whose goal scoring hot streak saw them promoted to the Premier League and in his debut season had scored 15 goals by January and got called up for England. Then he stopped scoring, and his career trajectory crossed what’s known as the Jeffers Line, and he faded from memory like an old Polaroid.

Now, I think Vardy is better than that, but one glorious season in the Premier League at the age of 28/29 is still very much an outlier in terms of his career, and I don’t think it’s unreasonable to harbour a little concern. I know he was a late bloomer, and I know that Ian Wright didn’t join Arsenal until he was 28, but Ian Wright was, you know, Ian Wright.

Still, I guess one of the things people wanted from this summer was to see something of a change from Arsene Wenger. He’s been criticised for being too cautious or too stuck in his ways, and if he’s going full out for Jamie Vardy, then that’s certainly something different. It is not the safe or easy option by any stretch of the imagination.

Given the manager’s contract situation, it was interesting how many people referenced Alex Ferguson’s purchase of Robin van Persie to me. He knew he was going into his final year in the job and went all out to get the goals he needed to win the title. Of course it’s speculative to say that this is going to be Wenger’s last hurrah, but there are definitely some similarities between this and the van Persugon thing.

Some of the reports say we want to get this deal done by the end of the weekend, so we’ll have to wait and see. Part of me also wonders if this is actually the real target and not something of a smokescreen as we look elsewhere, but time will tell. It definitely gives us all something to talk about anyway.

Meanwhile, there was a lot said at last night’s supporter’s event at the Emirates. We know that Ivan Gazidis is a consummate speaker at these kind of things and last night was no different. He spoke about the manager, the owner, the ambition of the club, data analysis, fitness, scouting, tickets, fans unrest, and lots more.

Tim Stillman was there. He then went home, stayed up half the night and did a full, and I mean FULL, transcript for Arseblog News which you can read here. I believe he is now hallucinating from exhaustion, so I hope he has a good trip. Thanks Tim!

It is interesting stuff in general, but Ivan Gazidis is never going to say the wrong thing and he always talks well. When we hear about the ambition of the club and the desire to be the best – or at least better – I think there’s an element of ‘heard it all before’ to it (like this kinda thing). What will convince people is what we do, not what we say, so I’m looking forward to our actions speaking louder than these words over the course of the summer.

Right, plenty to get you going this morning. Have at it in the arses, more from me tomorrow. Until then have a good Saturday.