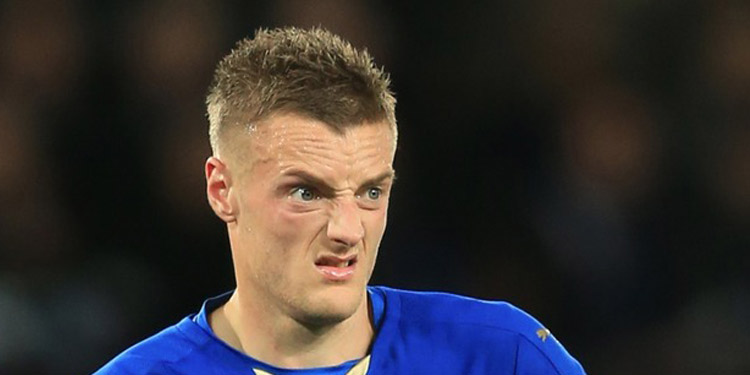 Good morning. It’s a bank holiday here today, but here I am as ever. Glutton for punishment, perhaps. I was out for a few beers last night and was hungry so I was thinking about going for a kebab. However, I didn’t have enough beer to convince myself that I wouldn’t regret it this morning so I came home and had a ham and cheese sandwich instead.

You’d want to be a fairly twisted person to regret a ham and cheese sandwich. Although right now I am somewhat regretting not having a kebab because they are delicious, but my regret over that is not enough to cause me any angst, so I think it’s all good.

The latest on the Jamie Vardy thing appears to be that he’s got a decision to make and is pondering an improved contract offer from Leicester. I will certainly defer to those who have more insight into this situation than I do, but it just sounds to me like it’s all part of the pantomime.

I think at this point he’s made his mind up. Of course there’ll be the usual stuff about ‘Remember what Leicester did for you, plucked you from lower-league obscurity and gave you a chance’. Tugging on those heart-strings and what have you, but it’s very difficult to recall too many occasions when footballers made decisions based on sentimentality.

They make them, generally speaking, for ambition or money, or a combination of both. What Leicester did last season was amazing, incredible and genuinely fantastic, but it’s difficult to imagine them repeating it. The fact that they did it at all should give us some pause for thought and not dismiss the idea of establishing themselves as a competitive top 4 or top 6 club as ludicrous.

We all thought a club like that winning the league was going to be impossible and they showed us that football is a game that can still surprise us. Turns out even the know-it-alls don’t know it all. Nevertheless, it wouldn’t be too much of a shock if they slipped back down the table next season, and what they did in 2015-16 became an unlikely but stunning footnote in their history and that of the Premier League.

If there’s interest from us in Vardy, won’t there also be interest in Riyad Mahrez, N’Golo Kante and others who, like the striker, find themselves ‘hot properties’ at this moment in time? Indeed, we’ve been a bit spuriously linked with Mahrez already, while we supposedly had our eyes on Kante too. They could basically pick and choose whatever club they wanted this summer.

The innate hunger that everyone so admired in Leicester, that served them so well last season, now becomes something of a problem because another side of that is for those players to go onto bigger (not necessarily better) things. Not quite Leicester as a stepping stone, but Kante came from the French lower leagues to the Premier League and now has all the top clubs after him. If one of them came calling, I think we all know what would happen.

So, I would be absolutely staggered if there was any dilemma for Jamie Vardy. I’m sure he does love what Leicester did for him and what he did there. I’m sure he has a connection with the fans. I’m sure he thinks it’s one of the best things that ever happened to him. But when, at 29 years of age, you get the chance to join Arsenal you don’t say no. Simple as that. A player who has shown the hunger and desire to blossom this late and make his way from the lower reaches of English football won’t turn down that opportunity.

Even Olivier Giroud said on television the other night that he was told that Jamie Vardy wants to join us. Not that we’re interested in him, but that he wants to come to Arsenal. Perhaps it’s his English not being perfect, but maybe that’s exactly what he’s heard.

So, this whole ‘will he, won’t he’ is stage-managed nonsense, I reckon. ‘Oh look Leicester fans, I’m so torn, but in the end I couldn’t turn down the chance to join Arsenal’. I don’t expect anything other than this deal to go through, and if it has to happen before the European Championships so he can concentrate on that, then it should be something that happens fairly early this week.

Tim from @7amkickoff did a nice Jamie Vardy: By the numbers piece which is worth a look, and as I said yesterday, concerns about how he might fit into our style suggest to me that our style is going to change a bit. How often did we talk last season about the team lacking cohesion and fluency?. It was often hard to define the way we played, especially given how identifiable Arsene Wenger’s football usually is.

It was something he had to address and while some of that work will be done on the training ground, it seems apparent he’s doing some of it in the transfer market too. It might become more clear with further purchases, so we’ll have to wait and see what happens there.

Right, James and I will be here with an Arsecast Extra for you this morning. If you have any questions or topics for discussion, please send to @gunnerblog and @arseblog with the hashtag #arsecastextra. We’ll have that ready for you before lunch.

Finally, big props to ‪@AFCAbhiKTF‬ who actually made a movie trailer from the movie trailer audio from Arsecast 391. Check it out below.