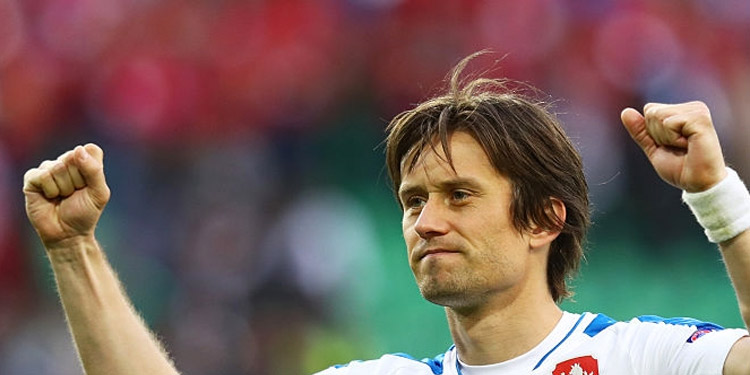 Did I ever mention I love Tomas Rosicky?

I think I might have, but watching him last night for the Czech Republic reminded me of it once more. Trailing 2-0 to Croatia, the Arsenal man (his contract doesn’t expire until June 30th so we can claim him for a few days more), provided the most Rosicky assist you will ever see. He loves a pass with the outside of his foot as much as I love a bacon sandwich, and this one was nodded into the top corner by Skoda, a player with a real engine, you have to say. Watch it here.

That made it 2-1, and there was still time for them to get an equaliser. That it came in the third minute of many minutes of injury time was down to some Croatian fans throwing flares onto the pitch, fighting with each other and the police moving in. Before that Rosicky’s hamstring went pop, with nobody near him he fell clutching the back of his leg, and we all know the consequences of that. His European Championships are over.

But he stayed on, barely moving, and when Vida’s handball provided the chance for the equaliser it was well and truly taken. Tomas Necid thumped the ball into the roof of the net, and the late goals that been a feature of this tournament continued. There was one earlier when Eder gave Italy a win over Sweden in what was an outrageously dull game of football, and the penalty for the Czechs gave them something from a game in which they had struggled throughout.

It also meant that my treble was back on and when Spain thumped Turkey in the late game it made up somewhat for the irritation Sturridge’s late goal for England caused.

But, back to Rosicky. It’s such a shame for him that injury has struck once again. His last season with us was basically a 20 minute cameo in an FA Cup game, and it does look as if his tournament is over. I suppose, at 35 years of age, he’ll have to be considering whether or not he can continue. Not if he wants to, I’m sure he does, but if his body is capable of it. If this does turn out to be his last appearance for his country though, he made a fine contribution to the result.

Also, while I know there was a presentation to him on the last day of the season, I think he deserved a little more fuss from the club in terms of his departure. I know some will suggest that his absences don’t really propel him into the pantheons of Arsenal greats, but for me those absences only serve to illustrate how good he was. We missed him, and he’s definitely one of the good guys. Anyway, maybe that’s just me, but there you go.

In relation to the trouble towards the end of the game, the Croatian coach Ante Cacic condemned it in the strongest possible terms, saying:

What has happened was terrorism. They are hooligans, not supporters. Their place is not in the stadium but even people in the Croatia media were not happy with my comments about that before the game. It’s clear these people are hooligans. The same thing happened in Milan against Italy. There was the Nazi sign on the pitch – they are ruining what we are doing.

They probably have support from somewhere but 95% of Croatians are ashamed in front of the whole of Europe. Our players are so sad. They are so proud to wear the Croatia shirt and play for the Croatian people and we are very sad after playing such a beautiful match.

In a week when Russian officials have basically endorsed hooligans that have terrorised France, left people bloodied and beaten – and in some cases critically, permanently injured – you have to applaud that stance. There cannot be any tolerance for this kind of behaviour. We can’t continue to write it off as something that just happens at football matches.

Quite how UEFA and FIFA think they’re going to manage the World Cup in Russia in 2018 is beyond me. Whatever about these thugs travelling, when they’re on home soil and familiar territory, you have to think it’s going to be an absolute nightmare. Even if you’re not the aggressor, would you fancy being caught up in it or trying to defend yourself? No thanks.

We just have to say sorry to UEFA, to the Czech Republic, all people around the world following this tournament and who love football. We have to play our matches in a better atmosphere and I hope UEFA can understand this. In the next qualifiers we have to play in empty stands and stadiums because of all these stupid supporters.

Again, no excuses, no obfuscation, and while it’s obviously a shame those events took place, the Croatian reaction to it has been excellent. It must be especially difficult for them because that stoppage seemed to play a part in the concession of the late penalty – when your concentration is broken in that way, you can end up doing something stupid and so it came to pass.

Today, it’s Ireland v Belgium, Iceland v Hungary and then Portugal v Austria. I’m going to go with a win for Ireland, my Icelandic chums to do something special again and beat the Hungarians and somehow annoy Ronaldo while doing it, and for Portugal to beat Austria. Let’s see!

Elsewhere, Colombia are into the semi-finals of the Copa America after a penalty shoot-out in which David Ospina did this. Congratulations to him and to Colombia. Tonight there’s Arsenal interest when Chile take on Mexico, with Alexis Sanchez involved there. That should be a cracking game but as it kicks off at 3am there’s no way I’m staying up that late to watch it. I’ll catch the highlights in the morning.

Right, not much else to do today but finish with a Tomas Rosicky compilation, just because. Have a great Saturday.