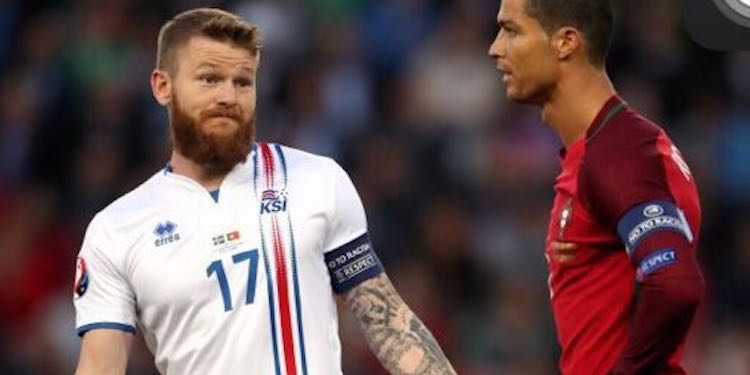 If someone asked you ‘What are the best things about football?’, what would you say? Off the top of my head, here’s a list, in no particular order, of some of the things I really love about the game.

All of things are wonderful, but there’s something particularly enjoyable about the last one. So today I salute Iceland, not simply for marking their debut in a major international tournament with an excellent 1-1 draw against Portugal last night, but also for causing Ronaldo to throw his toys out of the pram after the game.

In injury time Portugal were awarded a free kick 35 yards out. Ronaldo pulled up his shorts so that everyone might see his muscly legs, and smacked it into the wall. The referee awarded another free kick for an alleged handball, this time much closer to goal. Ronaldo did his ‘I AM ABOUT TO TAKE A FREE KICK, BEHOLD MY MAJESTY’ stance, and hit this one into the wall as well, much to the delight of everyone in the world who wasn’t Portuguese.

The ball rebounded high in the air, someone might have kicked it, the ref blew the final whistle and the ball hit him on the head. He walked off shaking his head at the injustice of it all. Quite how he manages to even move his head, which appears to be superglued to a neck so meaty you can’t help wonder if it hasn’t been transplanted from a bull loaded up with PCP, is beyond me.

‘Do these island people not know who I am?’ he probably thought. ‘Look at them with their beards and their names all ending in ‘son’. This is a fix like all those times Messi was awarded the Ballon d’Or ahead of me.’

One Icelandic chap walking behind him seemed to want to shake hands, as sportsmen do at the end of the game, but Ronaldo was having none of it. Simmering with resentment and disbelief that this nation of fishermen and volcano wardens had denied him glory and a chance to show off his pectorals in front of the TV cameras, he took it into the post-game realm. To say his comments were ungracious is understating it.

More Ronaldo: "They celebrated like they had won the Euro cup or something. That's a small mentality. That's why they'll do nothing."

Honestly, what an absolute spanner. Iceland weren’t there to provide fodder for his rampant ego. They were underdogs in a game against a team that has a history of doing nothing much in international tournaments but flattering to deceive. They did their job, Portugal didn’t do theirs, but that he shows little or no understanding of this is no real surprise.

I always find it rather ungracious when a team is criticised for being aware their opponents are superior on paper and thus using a game plan to deal with that. Remember Mourinho complaining about teams ‘parking the bus’? The arrogance of it, as if they’re supposed to play open, expansive football so the fancy-dans can have it all their own way. Stick it up your hoop.

As for Ronaldo, this is a man who, scoring the 4th goal in a Champions League final in 2014, a penalty in the 120th minute no less, ripped off his shirt, bulged his muscles and celebrated like he’d scored a last minute winner. I’m sure he’s a very driven, very professional and very committed footballer, and this is part of what makes him as good as he is, but he’s also a massive wanker, and he showed that again last night.

So, well done Iceland. Not simply for the result, but for making him unhappy. That makes me happy. You may call me small, petty, spiteful even. I realise that, but I am who I am and I’m not for changing.

Elsewhere, Hungary beat Austria 2-0 thanks to Gabor and his grey tracksuit bottoms. Lovely second goal in that game too. Today we have Russia v Slovakia, Romania v Switzerland and France v Albania. A Slovakia, Switzerland, France treble comes in at a little over 10/1, so I’m throwing a tenner on that.

Elsewhere, Chile are through the quarter-finals of the Copa America after a 4-2 win last night over Panama. Alexis Sanchez scored twice. His second was a very nice header, but the first one, oooooof. May this be the one that relights his fire, so to speak. What a hit.

Fingers crossed we see some of that from him next season. Not much else to talk about this morning, except the fact that the Premier League fixtures for 2016-17 are released this morning. We’ll have all that and more over on Arseblog News as soon as it happens, so keep an eye on there for all the details.