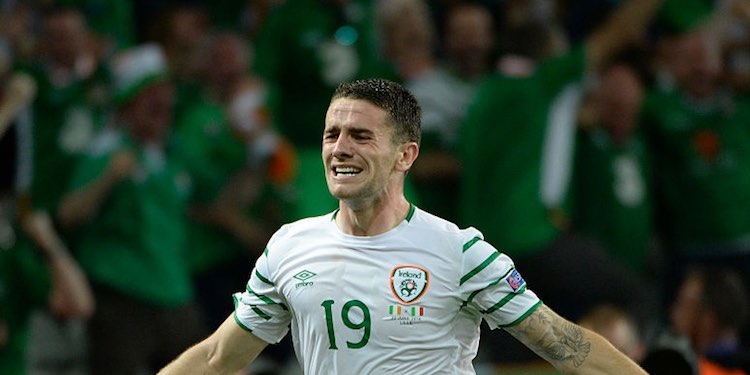 When it opened up for Wes Hoolahan in the 84th minute I thought this was the moment for Ireland. The team’s most creative player, left on the bench by Martin O’Neill, was going to come on and show the manager he should have started.

He just had Italian goalkeeper Salvatore Sirigu to beat, and loads of time at his disposal. Maybe too much time, because he seemed to take just too long to take the shot. Sometimes, in the case of Michael Thomas at Anfield in 1989 for example, it all works out, but this time his effort was a bit tame, and the keeper grabbed the ball as it rebounded off him.

What a miss. What a chance. And of all the players too. The guy whose craft was missing from what was a good Irish performance overall. Lots of possession, just nobody to pick the lock. What a shame. And then a minute later he picked up the ball outside the penalty area and curled in the most delicious cross, made even more so by the run of Robbie Brady who nodded home to make it 1-0.

I loved Brady’s explanation after of how ‘My body started to carry my legs into the box’. I think I know what he means, but it’s still brilliant. And nobody could say the goal wasn’t merited on the night. I was very dubious of the initial team selection, but even if Ireland were helped by an Italian side that wasn’t exactly going all out to win it, it was a really solid performance. Unlike the Belgium game, they didn’t seem scared of the ball.

How there wasn’t a penalty awarded in the first half is beyond me. The referee gave free kicks all over the place for exactly those kind of fouls and when the bloke clattered into the back of James McClean it really should have been a spot-kick. In the end though, that would have meant a whole half of torture and hanging onto a lead, rather than just 5 minutes + injury time, so it all worked out.

But also, look at Gianluigi Buffon! What a dude.

Haha beautiful of Buffon to celebrate with Roy Keane and O'Neill pic.twitter.com/jo0diDQTWD

So, it means Ireland face France on Sunday, and what a game that could be. If there is any justice the Irish winner will come from a free kick that was never a free kick and, eclipsing the Hand of God that did for England in 1986, when Ireland’s Ipswich striker punches the ball into the top corner, the world of football can talk about The Fist of Murphy for years to come.

I have no idea exactly how the Irish fans in France celebrated yet, but I’m sure they did so with gusto and look forward to seeing the videos of them uniting divided communities with song, rescuing kittens from trees with a wink and some charm, before somehow discovering a new kind of environmentally friendly fuel that will power the world for centuries to come.

Earlier, Iceland set up an historic knock-out round clash with England after grabbing themselves a late winner against Austria. They would have been through with a 1-1 but in the dying seconds they had a chance to get their first ever win at a major tournament, and boy did they take it. Sparking raucous celebrations and that Iceland commentator, who I assume is the same one who enjoyed that Danny Welbeck goal against Leicester so much, pretty much lost his mind.

As Jens Lehmann would say, What A Magic. Not so much for Austria, of course, but then I think this tournament needs things like Iceland winning. Some will say it was a lucky break for England as they’ll avoid Portugal now, but I’m sure the Icelanders will fancy their chances whoever they play.

Hungary v Portugal was a mad 3-3 draw, I was flicking between that and Iceland game, while Belgium beat Sweden 1-0 to compound a miserable tournament for our chums from the Land of Limpar. And now, for the first time since the Euros began, we have no football today. Withdrawal symptoms may be hard to take. I recommend YouTubing some player compilations or something.

Across the Atlantic in the battle of the Arsenal men at the Copa America, Chile came out on top against winning 2-0 in a game that was delayed by a couple of hours because of bad weather. Alexis didn’t score, but I loved this description of him in the Guardian report: ‘Alexis, a human tunnel bore, drilled his way towards goal and shot from an acute angle.’

Fantastic. So that means the final takes place between Argentina and Chile on Sunday, which should be a cracker. All in all, there’s plenty of football to look forward to over the next few days, so maybe having one day off today isn’t the worst thing ever.

From an Arsenal point of view it’s pretty much deathly quiet, unless you fancy a Brazilian left-back called Santos? Once bitten, perhaps, but you never know.

Right, that’s that. More from me tomorrow.

Is Marc Overmars set to become the new Dick Law?