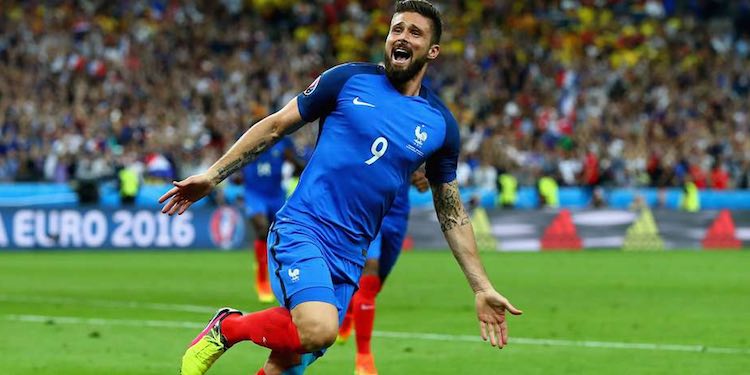 Good morning to you all from the deck of my brand new super-yacht. I have christened her L’Arse. My boat boy, Agamemnon, is about to serve me a breakfast of the finest champagne, eggs Benedict Cumberbatch (oddly intelligent looking eggs), truffles, as well as the finest breads and pastries.

Yes indeed. I am now filthy rich having put a whole fiver on Olivier Giroud scoring the first goal last night, and at odds of 4-1 I don’t need to explain to you how this significantly affects my wealth. Quite what I’m going to with the rest of it, I don’t know. Any financial advisors out there who wish to dispense some advice I’d be more than happy to listen.

So, France kicked it all off with a win last night. I watched in a pub so it was one of those games where you’re sort of watching and sort of talking to people, but I seem to recall Giroud missing a couple of chances before he scored. This sticks in my mind because it’s quite unusual, I don’t remember ever really seeing that before.

But in the 57th minute Payet put in a cross from the right, the Romanian keeper came and didn’t get there, allowing Giroud to flick a header into the net to make it 1-0.

I did enjoy his arms instinctively going into the air in celebration but also just a bit of surprise in there too. It wasn’t dissimilar from a goal he scored for us last season, I think it was against Everton and the delivery was from Mesut Ozil.

Then Evra gave away a penalty and it was 1-1 until almost the last minute when Payet did this and Giroud then did this:

Which made me laugh. And what more can you ask for from a game of football? An opening goal that wins you a fortune, Patrice Evra making a mistake, then an absolutely brilliant late winner followed by a fun bit. I hope the rest of the tournament takes up this baton and carries on from here.

Today starts with some Arsenal interest when Albania face Switzerland, and our new boy Granit Xhaka will be playing. It’s a game that has a rather unusual situation too because he’ll be facing his older brother, Taulant, who plays for Albania. It’s certainly a rarity, you don’t often see brothers up against each other on the international stage, so that’ll add a bit of something extra to it.

He spoke about it, saying:

It will be difficult to play against him, but we are professional. I hope Switzerland win and after the game I hope I can shake my brother’s hand and say, ‘Good luck in the next game’.

Which is remarkably diplomatic of him, because I know when I play on the opposite team to the Mugsmasher in 5-a-side he turns into a cross between Graeme Souness and Attila the Hun, well known for his shirt pulling and sneaky off the ball fouling as he pitted his band of Ostrogoths against local Balkan teams during his fifth century plunders.

I’m sure there’ll be handshakes afterwards, but it’ll definitely add a competitive edge to things. After that we’ve got Aaron Ramsey and Wales taking on Slovakia, before England play Russia in Marseilles later tonight. Whether there’s any Arsenal interest in the team remains to be seen, Jack Wilshere is the only one who can provide that, so let’s see what happens.

The build-up to this one has been somewhat marred by incidents last night involving some English fans. I haven’t seen much in the way of detail about it but it’s obviously a shame that it happened and hopefully there’ll be no repeat of it today. The vast majority of fans are there to have a good time, not to get involved in this kind of stuff, and the timeline of Ken Early from Second Captains suggests that the bar he was in was attacked – which sparked some of the stuff that’s in the papers today.

Update: This from Iain Macintosh is worth a read too.

Anyway, fingers crossed all we’re talking about tomorrow is the football and how great it was. From an Arsenal point of view there’s very little going on, so have yourselves a good Saturday, enjoy the games and I’ll be back tomorrow dressed in fur coats and driving a Ferrari as my bets for today come in.

I’m sticking my winnings on a Switzerland, Wales, England treble.